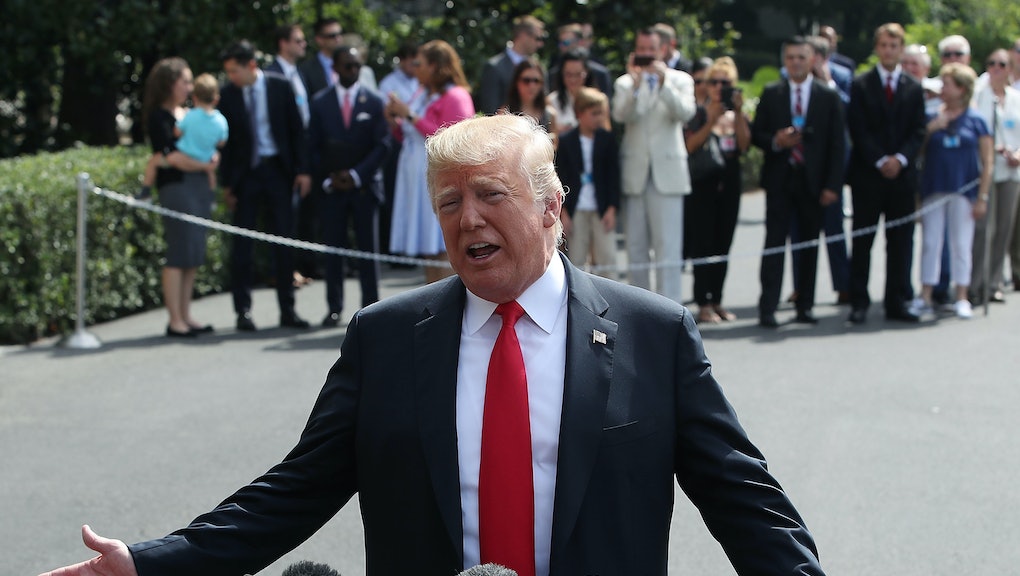 Despite Trump’s claims, “collusion” is a crime — it just goes by another name

As they seek to discredit special counsel Robert Mueller’s investigation into Russian interference in the 2016 election, President Donald Trump and his defenders have for months been claiming that collusion is not a crime. However, there’s a major problem with their argument: Collusion is, in fact, a crime, according to legal experts. It just goes by another name — conspiracy.

“To collude means to conspire, and it is absolutely illegal to conspire to commit a crime against the United States. Period,” Jennifer Taub, a professor at Vermont Law School, said in a phone interview.

Trump has tweeted about collusion dozens of times since the probe into his campaign’s potential communication with Russia began, saying repeatedly that there was “no collusion.” Recently, Trump and his legal team have modified that message, saying that “collusion is not a crime.”

“I don’t even know if that’s a crime, colluding about Russians,” Trump personal lawyer Rudy Giuliani said July 30 on CNN. “You start analyzing the crime — the hacking is the crime. ... The president didn’t hack.”

The next day, Trump tweeted out that same message. “Collusion is not a crime, but that doesn’t matter because there was No Collusion (except by Crooked Hillary and the Democrats)!” Trump tweeted on July 31.

Now, Trump is reiterating that message again, tweeting on Monday that Mueller’s investigators “made up a phony crime called Collusion, and when there was no Collusion they say there was Obstruction (of a phony crime that never existed).”

Yet according to legal experts, that’s splitting hairs, given that there are many colloquial words like “collusion” that don’t appear in the federal code but most certainly are crimes. Take for example lying to federal agents.

Multiple people in Trump’s orbit have already pleaded guilty in Mueller’s probe to lying to federal agents. However, the word “lie” doesn’t appear in the statute that led to the guilty plea. Instead, it’s defined as making false statements.

According to the statute:

Whoever, in any matter within the jurisdiction of the executive, legislative, or judicial branch of the Government of the United States, knowingly and willfully—

(1) falsifies, conceals, or covers up by any trick, scheme, or device a material fact;

(2) makes any materially false, fictitious, or fraudulent statement or representation; or

(3) makes or uses any false writing or document knowing the same to contain any materially false, fictitious, or fraudulent statement or entry;

“People have pleaded guilty and served jail time for lying to the FBI, even though the word ‘lying’ is not in the statute,” Taub said. “It’s a different word, and the word is making a false statement, but that means a lie.”

Taub said it’s similar with collusion and conspiracy, which means two or more people agree — or collude — to commit a crime, with one person taking material action to commit that crime.

If two or more persons conspire either to commit any offense against the United States, or to defraud the United States, or any agency thereof in any manner or for any purpose, and one or more of such persons do any act to effect the object of the conspiracy, each shall be fined under this title or imprisoned not more than five years, or both.

“Collude is shorthand for the word conspire,” Taub added.

Mueller has charged multiple people in his probe with conspiracy against the United States, including former Trump campaign chairman Paul Manafort and former Trump campaign aide Rick Gates – who pleaded guilty to one count of conspiracy against the United States and another count of making a false statement to Mueller’s investigators.

Mueller also filed new charges in June against Manafort and Konstantin Kilimnik, a Russian-Ukrainian political consultant who has suspected ties to Russian intelligence, that included conspiracy to obstruct justice and conspiracy to launder money.

“’Collusion’ is not a legal term. But conspiracy is, and that is what Mueller charged,” former federal prosecutor Renato Mariotti tweeted in June after that indictment.

Mueller has yet to release any evidence or reports that say Trump himself conspired — aka colluded — with Russians in any illegal activity related to the 2016 presidential election. But that doesn’t mean Trump — or anyone on his campaign — has been exonerated.

In fact, there are questions about whether the meeting his son, Donald Trump Jr., had with a Kremlin-connected lawyer in Trump Tower in June 2016 in which he was offered “dirt” on Hillary Clinton amounts to conspiracy.