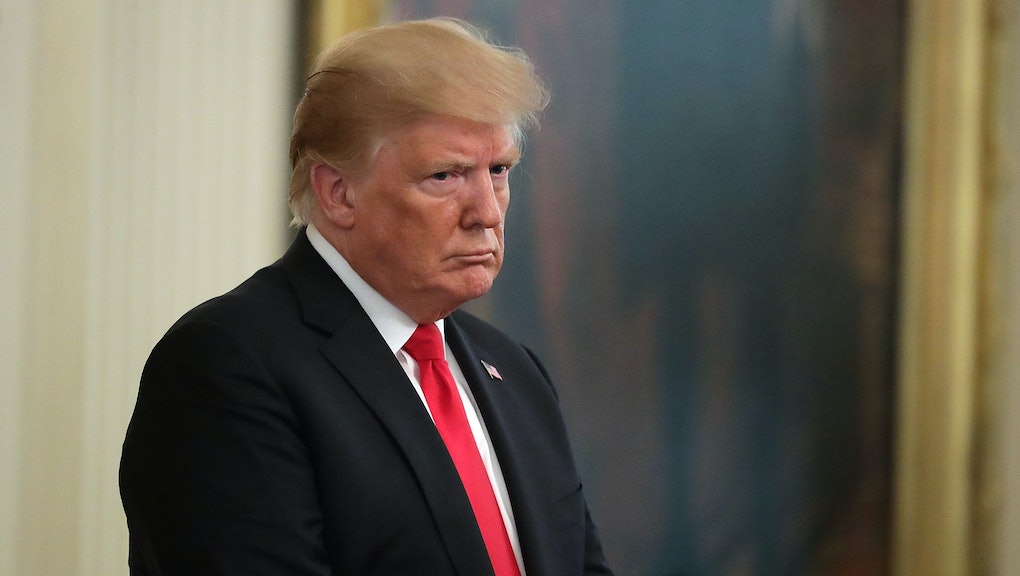 Today in Trump’s America: Trump may have unwittingly confessed to a felony on ‘Fox & Friends’

• Trump has an easy day — the only public event on his schedule is a roundtable at 11:30 a.m. on the Foreign Investment Risk Review Modernization Act, which seeks to give Congress more oversight in approving foreign company investments in U.S. business.

About last night: Trump may have implicated himself further in Fox & Friends interview

On Wednesday, the president gave an interview to the morning news show Fox & Friends. While the interview with a friendly news outlet was supposed to mitigate the damage from the legal woes sparked by Michael Cohen’s guilty plea Tuesday, it instead made Trump’s troubles worse.

That’s because Trump may have unwittingly confessed to committing a felony campaign finance violation in an on-camera interview.

The fact the payments didn’t come from the campaign coffers and were not reported in campaign finance reports is exactly why the payments were illegal.

According to the Federal Election Commission:

And given Trump’s own lawyer, Rudy Giuliani, admitted the payments were intentionally made and then concealed in an effort to silence women and prevent them from negatively impacting Trump’s electoral hopes, the payments should have been reported and should have adhered to federal campaign spending limits.

“Imagine if that came out on Oct. 15, 2016, in the middle of the last debate with Hillary Clinton,” Giuliani said back in May.

“Cohen made it go away,” Giuliani added, referencing the payments. “He did his job.”

In the Fox & Friends interview, Trump also lied about when he knew about the payments.

“Later on I knew,” Trump says.

But audio Cohen released in July shows Trump directly discussing the payments before they were made — meaning Trump did know about them.

Cohen also testified under oath that Trump directed him to make the payments.

As a legal shadow darkens over Trump, he complained to Fox & Friends about the fact Cohen — his longtime lawyer and “fixer” — has now turned on him.

“It almost ought to be outlawed; it’s not fair,” Trump said of the practice investigators use to get co-conspirators of crimes to flip on their associates.

“It’s called flipping, and it almost ought to be illegal,” he added.

He went on to say he shouldn’t be impeached because he’s “done a great job.”

“I don’t know how you can impeach somebody who has done a great job,” he said.

Of course, a president’s job approval has nothing to do with whether or not a president can be impeached.

Former President Bill Clinton’s approval rating actually went up during impeachment proceedings back in 1998. Republicans still voted to impeach him, though he was not removed from office.

The midterm elections are in 75 days, and a new poll from Fox News shows Democrats with an 11-point lead on the generic congressional ballot — a margin that would lead the party to ride a tsunami-like wave to a House majority.

Democrats’ generic congressional ballot lead is up 8 points from a July Fox News’ poll, which is considered one of the gold standard public surveys.

Of course, 75 days is a lifetime in politics.

But historically the party that leads the generic ballot around Labor Day of a midterm election year goes on to do well in the November election.

For example, at this same point in the 2010 midterms — when Republicans rode a Tea Party-led wave into power — the GOP had an average of a 5-point lead on the generic congressional ballot. The GOP went on to win nationwide by 9.4%.

In September 2006 — the year Democrats rode a wave into power — the party had an average of a 6.5-point lead in the generic congressional ballot. That year Democrats went on to win nationwide by 11.5%.

As of Thursday, Democrats currently have an average of a 6.6-point lead on the generic congressional ballot, according to RealClearPolitics.

Hung jury: A juror from the trial against former Trump campaign chairman Paul Manafort told Fox News just one person on the 12-person jury led to the mistrial on 10 of the 18 counts Manafort faced. According to that juror, 11 jurors voted to convict Manafort on those counts, while one did not. Any decision by a jury in a criminal trial must be unanimous. Manafort was still convicted on eight counts of tax evasion and bank fraud, which carries a maximum sentence of 80 years in prison.

DNC hacking: The Democratic National Committee alerted the FBI that it detected a sophisticated phishing attempt to hack its voter file, CNN reported Wednesday, a sign election meddling is ongoing.