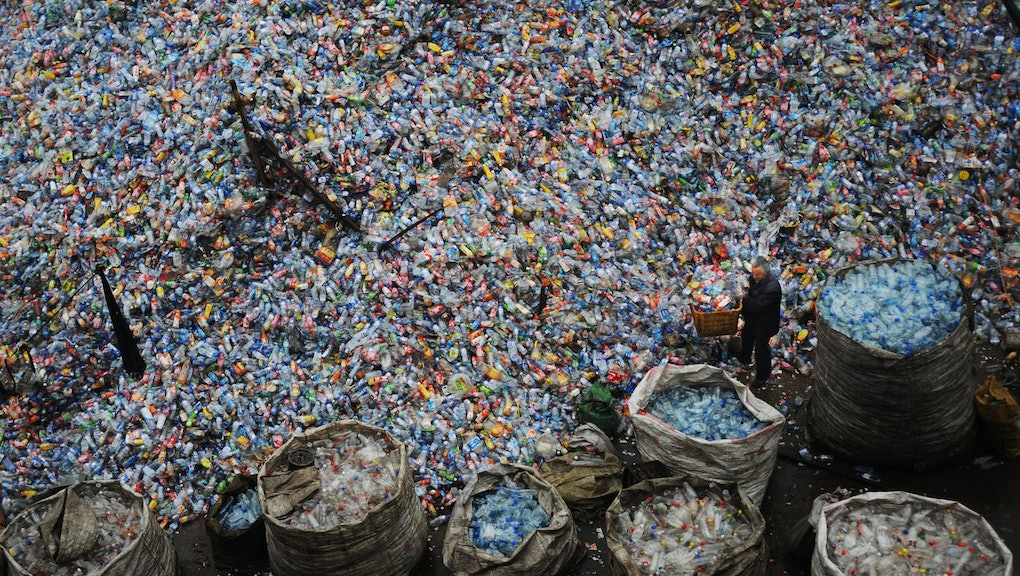 We’re all guilty of mistakenly throwing away trash in a recycling bin or tossing a paper cup in a disposal meant for plastic.

According to Waste Management, an American trash collecting company, the average recycling contamination rate — or disposal of trash or recyclables in the wrong recycling bin — is 25%, meaning 1 in 4 items thrown in a recycling bin isn’t recyclable.

And recycling contamination’s effects extend far beyond environmental harm, Tori Carle, a waste reduction supervisor in Greensboro, North Carolina, said over the phone, and the problem may only worsen with time.

The U.S. previously exported about one-third of its recyclables — but that all changed in 2013, when China, one of the largest purchasers of the country’s recyclable materials, created the Operation Green Fence policy. This policy meant intensive inspections of recycling coming from the U.S. for any contaminants. In 2017, China took this even further and introduced the National Sword Policy, banning the import of recyclable waste, which went into effect in January 2018. The U.S. suddenly faced a new predicament: Where would it outsource its massive trash production?

“China was tired of buying our shitty recycling that was filled with garbage,” Mitch Hedlund, founder and executive director of Recycle Across America, said in a phone interview. “We didn’t clean up our recycling and continued to leave it confusing for the public. So [China] went from purchasing about 30% of U.S. recycling to purchasing less than 3%.”

According to Hedlund, our recycling facilities are now vulnerable in a number of ways.

Typically, all recyclables in the U.S. are brought to a materials recovery facility, where machines and people sort through and separate recyclable materials — and the process is often incredibly dangerous for workers.

According to Hedlund, one facility with $17 million dollar equipment suffered from similar issues with improper recycling. “Every 25 minutes almost on the clock, their equipment breaks down because of plastic bags or plastic films get stuck,” she said.

From needles and syringes to scrap metal, the garbage found in bins is often hazardous to workers who come into contact with them. “Last week, I saw a frame of a bicycle in a recycling can and that large piece of scrap metal could actually fall and hurt someone,” Carle added.

When a facility stops its machinery to disentangle nonrecyclables, this results in enormous delays for the facility too, Carle said, which can also become an expensive practice long-term. “A lot of downtime means a recycling company is losing time, and therefore, dollars,” Carle said. In fact, a recycling facility in Phoenix, Arizona, spends as much as $1 million in lost time due to improper recycling, mostly because of having to remove plastic bags.

On a larger scale, the recycling industry could stand to benefit from enhanced recycling programs nationwide. A study from the Tellus Institute with Sound Resource Management found that improved recycling programs could result in a total of 2.3 million jobs by 2030, almost 2.7 times as many jobs that existed in the industry in 2008.

In an effort to curb recycling contamination, Rhode Island recently introduced a standardized labeling system on many of the state’s recycling bins, Hedlund said. This could help residents to better recognize and understand what can be recycled in a particular container. “Every bin and label looks very different elsewhere and that’s why the public doesn’t know how to recycle,” she said. “Already, that state has seen a 20% reduction in contamination in their recycling facilities — and they haven’t even introduced the labels to the entire state yet.”

So how should consumers recycle better?

Before you haphazardly toss another plastic CVS bag into a recycling bin, it’s important to know what can actually be recycled. Surprisingly, a recyclable symbol on a product doesn’t always mean something is actually recyclable.

For plastic products, less than 10% is typically recycled, with 75% of plastic ending up in landfills. According to a report by Columbia University’s Earth Institute, this could be due to the number of plastic products with different chemical compositions and the labor-intensiveness of separating and recycling them appropriately.

According to Hedlund, it’s important never to put a plastic bag in a recycling bin, which can interfere with recycling machinery. Alternatively, she recommended returning the bags to retailers who may be able to re-use them or simply disposing of them in the trash.

When it comes to plastic bottles, Hedlund says a good indicator of a recyclable one is its neck size, as bottles with wider necks are typically made of injection molding, a material that makes them nonrecyclable.

Surprisingly, paper can be recycled and recovered up to seven times before losing its quality, and in 2017, 65.8% of paper was recycled in the U.S. Hedlund recommended recycling only clean paper, like magazines or paper you’d find in an office, rather than soiled paper, like toilet paper or tissues or any other paper in contact with food, which can’t be recovered.

Glass, on the other hand, may be difficult to recycle, with some communities recently ending their glass-recycling programs, Hedlund said. In fact, according to the Environmental Protection Agency’s website, just 33.2% of glass was recycled in 2015. This could be attributed to the costs of recycling glass and a process that requires color sorting and cleaning.

According to Hedlund, glass bottles and jugs are usually recyclable in most communities, but there are still common misconceptions about the kind of glass that can be recycled. “People make the mistake that a wine glass can be put in a recycling bin, but that’s a different type of glass that can actually ruin the whole system,” she said. Instead, they, too, might have to go in the trash.

One final rule of thumb

Whether it’s plastic or glass, Hedlund recommended emptying anything before throwing it in a blue bin, to avoid any other contamination.

Carle said consumers should become more aware of their actions and their effects on recycling facilities, as well as the widespread opportunities proper recycling can create. “What you hold in your hand, to you, might be garbage, but is actually a resource and has economic value when it’s recycled right. A bale of paper, plastic or beer cans has the same kind of value as oil, silver or gold,” Carle said. “And the decisions you make — the styrofoam you put in recycling bins — drive that market down. But what it takes is people participating correctly, and sometimes, that’s like herding cats.”