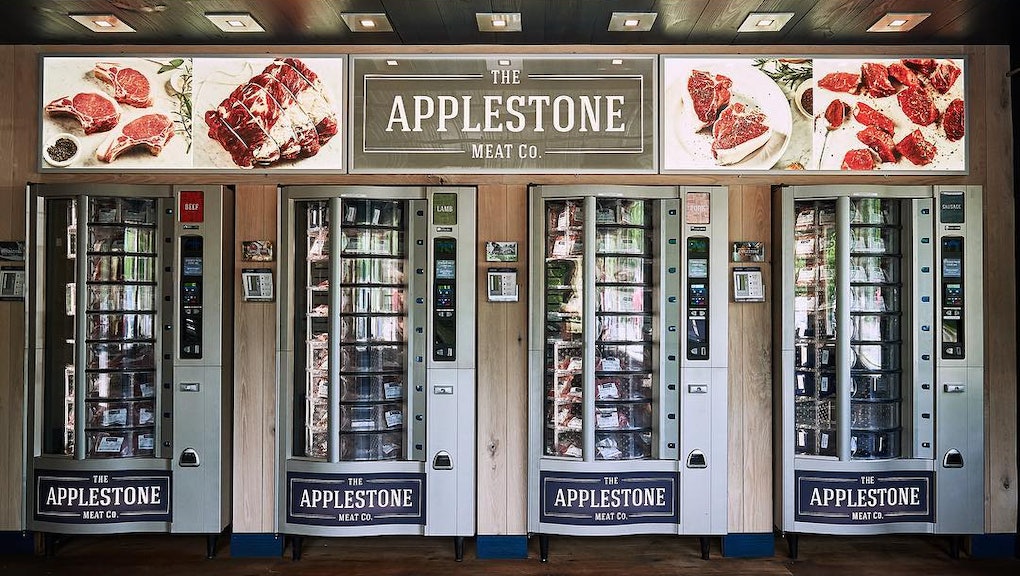 Meet Joshua Applestone, the man who wants to sell you steak from a vending machine

From cupcakes to made-to-order pizzas, vending machines have evolved to stock virtually anything a hungry person could dream of. And while you may rarely crave bone marrow at 3 a.m., one New York butcher hopes to be there for you if you do, and change the way we think about buying cold cuts and ground meats.

In 2015, the Applestone Meat Company, based in New York, developed its very own meat vending machines that sell an assortment of ground meat, sausage, pork, lamb and beef at any hour of the day.

Created by founder Joshua Applestone, the freezer vending machines are located at Applestone Meat Company’s two facilities in Accord and Stone Ridge, New York and are stocked daily. Like an old-school dessert case at a diner, the machines rotate, giving customers a chance to pick the best meat of the lot. With the swipe of a credit card, they can go home with a strip steak or ground meat, no human interaction necessary. Applestone estimated the vending machines sell some 3,000 pounds of meat every week, making up 70% of all of Applestone’s sales (the rest is online). He plans to expand with a stand-alone machine in Manhattan by 2019, and to eventually be present all over the country.

Applestone thought of the concept when looking for ways to save time, he said in a phone interview. “While I was building Applestone [Meat Company], people kept knocking on the door and we’d lose so much time with sales,” he said. “We installed the machines as a way to take the strain off, since we were only two employees.”

And the vending machines have developed an eclectic audience of all ages. “I really thought we’d be getting college kids coming late at night to get a couple of [raw] burgers,” he said. “But part of what I love seeing is kids coming in with their parents and their parents letting them buy something from the machines. It opens really important doors for them.” The experience lets kids find joy in choosing healthful food options to later cook with their parents, he said.

And yes, Applestone is aware of the hesitation for customers who aren’t sure about purchasing meat from a machine. “When I started, people thought buying meat out of machines wasn’t the most appetizing idea in the world. I think if we were selling computers, it wouldn’t be a big deal. But this is ground meat,” Applestone said. “And now people are pounding down my doors to open one up in every town that I can. We’re looking at society changing their expectations on service.”

Maintaining quality is just as important as keeping up the convenient service. Raw meats like steak and chops keep in the vending machines up to a week before being changed out. (An uncooked steak or chop can safely remain in a freezer anywhere from four to 12 months, according to the United States Department of Agriculture’s website). Each vending machine is also temperature-regulated, and Applestone receives real-time updates to monitor any changes, should a freezer go haywire. All meats are raised sustainably, without added antibiotics or hormones, by local, family-owned farms. “By having these vending machines, it’s almost like [anyone can] have mini-farmers markets,” he said.

While Applestone’s vending machine meats aren’t as cheap as gum or a bag of chips, the owner said the prices are consumer-friendly and aim to bridge the gap between prices typically found at expensive boutique meat shops and cheaper, traditional grocery stores. Ground beef, for example, will set you back $6.99 per pound.

Although vending machines do much of the heavy lifting when it comes to sales, Applestone said that doesn’t mean jobs at Applestone are in jeopardy. The facilities still employ a devoted butcher staff, and in case a fridge of meat seems too intimidating to customers, they can ask for help from real people at a customer service window between the hours of 11 a.m. and 6 p.m. “I wanted to create an approachable environment for our customers,” he said. “We believe that buying well-raised meat shouldn’t be intimidating.”