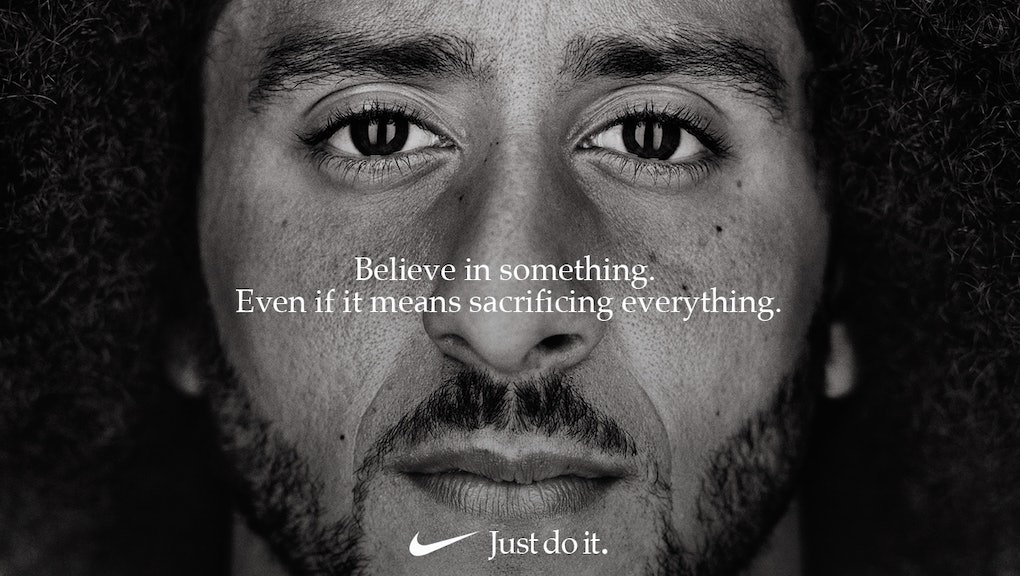 On Monday, three days before the official start of the NFL season, Nike unveiled Colin Kaepernick as the face of its latest “Just Do It” campaign.

“Believe in something. Even if it means sacrificing everything,” the ad reads, scrawled over a close-up on Kaepernick’s face.

Kaepernick first signed a contract with Nike in 2011, the same year he was drafted to the San Francisco 49ers, making him both a new face but hardly a new presence for the brand. However, according to the New York Times, that deal was set to expire soon had Nike not chosen to extend the contract.

“Colin is a Nike-sponsored athlete and has been since 2011,” Nike spokeswoman Sandra Carreon-John said in a statement to Mic. “As a Nike athlete, Colin has been featured in several campaigns for football, training and Nike Sportswear. The current Just Do It campaign celebrates some of the most inspirational athletes who have chased dreams no matter the obstacle or outcome.”

The ad campaign comes days after another victory for Kaepernick, in which his lawsuit against NFL, alleging it conspired to keep him out of the league as a result of advocacy, was granted a full hearing.

And while the ad has received praise online from other athletes like Serena Williams and Kyle Williams as well as T.I., Kelly Clarkson, Swizz Beatz, Ava DuVernay and DeRay Mckesson, it has also sparked some controversy, particularly by Kaepernick’s most outspoken critics, many of whom see his kneeling during the national anthem to be unpatriotic rather than a form of protest.

Some have even taken their anger and frustration out on Nike by burning or destroying their Nike-branded goods, in a sign of protest against a brand that both works with Kaepernick and with all 32 NFL teams (Nike outfits all game-day uniforms and sideline apparel for the league).

Some of the most viral tweets around the story are from those suggesting that for those incensed to, instead of destroying Nike products, donate to homeless veterans or kids in need.

There are also those who have purchased Nike as a result of the campaign announcement, a sign that Kaepernick may not be as polarizing a choice as some were led to believe.

Despite what could be bolstered sales or large-scale brand protests, the effects will take some time to deduce its impact one way or the other.

One thing is for sure: Kaepernick’s face on the ad campaign is sure to jostle the NFL ahead of a season that will no doubt illicit higher scrutiny from a league whose cultural dominance has been chipped away at over the last two years thanks in large part to Kaepernick’s efforts to use his platform to address racial inequality and police brutality.