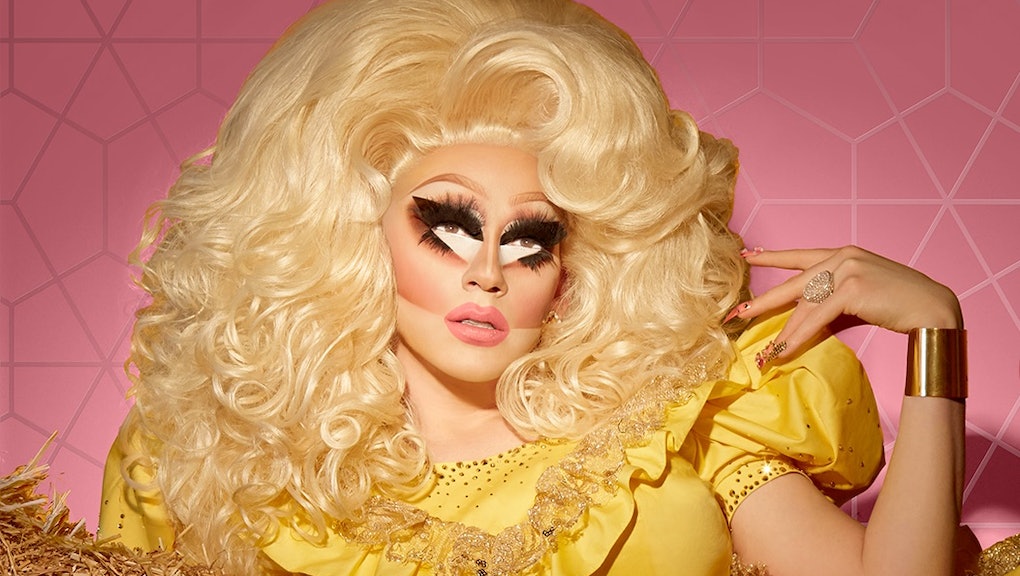 We regrouped with one of our fave queens on the scene to get the latest on the makeup line, why now is a “weird” time for drag and Trixie’s beef with the word “y’all.”

Mic: Before we get into it, why can’t we say y’all on Twitter anymore?

Trixie Mattel: Girl, apparently you can’t say anything on Twitter anymore. So many people who don’t say y’all in real life have said it on Twitter ‘cause now it’s like Twitter language. I sort of thought it was disrespectful to people who actually say y’all. But girl, Southern gay Twitter, it turns out they have phones and they are charged.

It is weird to be in the position where so many things that you say now, whether they be on Twitter or in real life, can blow up and become such a thing?

It’s a weird time to be a drag queen because we’re supposed to be the counterculture of it all. We’re supposed to be the button-pushers but really you can’t do or say anything — it’s crazy. Audiences, they’ve seen Drag Race and stuff, but a lot of the time, they don’t really understand where drag comes from.

I also feel like there’s pressure on a figure of your status to serve as some sort of ambassador of drag.

Totally. Currently if you’re tuning into drag [culture], Bianca’s a rape apologist, RuPaul’s transphobic, I’m racist. It’s sort of like, if you’re on the right side of history and you’re saying that the drag queens are bad, then I dunno... I don’t really know if you’re fighting the right person.

Oh, I’ve always wanted to do makeup. I love makeup, obviously, and I love makeup application. Even when I was dirt poor, you better believe I had money to save up for a Sugarpill eyeshadow. When I was in college pursuing my performance art degree, I was working as a makeup artist, at first freelance and then I worked for Ulta, I worked for Sephora, I worked for MAC. And for drag queens, quality product is important because we use it and abuse it.

I think I have a really good eye for a product that can be used in an extreme way but doesn’t have to be. I wanted to make products where you can use this same product to be in a drag show or fully go to work in a library.

These days, Trixie Mattel is an aesthetic that people know and love, but what was the reception to your makeup when you were first on the come-up in drag?

Oh my God, no. My life is like one long Pretty Woman moment. I mean, originally the makeup that people know me for... my makeup now, people that don’t even know drag, don’t even know my name, know my makeup and that was not always the case. My makeup used to be the case that I couldn’t get bookings. But I always knew what I was referencing and what I was going for. Drag queens parody the extremes of woman, and my look is sort of post-drag in that it parodies drag makeup.

On a recent episode of Race Chaser with Alaska and Willam, they spoke about how detrimental bad lighting can be for a drag queen. How important is lighting for today’s Instagram-savvy class of queens?

Oh my God, let me tell you this. I need to fact check the gender and the sexuality of every photographer that I work with so I know exactly what I’m going to get. If you look at every picture that I don’t love of myself, I guarantee you that it’s a heterosexual that took it. We’re not lighting a real person and so the lighting has to go with what is painted on.

When you look at my face, your eyes are essentially running an obstacle course, so if you don’t light it correctly, I can either look like this beautiful sculpted statue or I can look like Janis from the Muppets. For me, I like bright white lights straight on. Like if somebody a foot taller than you was holding a flashbulb, that’s sort of the exact perfect lighting.

Of all the Ru girls — and I think I have an inkling of who you are going to say — who is the best at makeup?

Kim Chi is the best makeup artist. Kim Chi is my favorite makeup artist, hands down. Because Kim never does the same thing twice. Her skill is unparalleled, always has been. However, it’s sort of the Olympics because drag makeup is all so different. Raven’s makeup is entrancing when you see it in person.

I want to talk for a minute if you will about the Latrice/cotton picking controversy...

Well, without referencing that specific controversy, I would love your thoughts on the ways in which drag queens today are perhaps held to a higher level of scrutiny then they were even, say, five years ago.

I want to end by asking how you’re finding this level of fame to be. I’m curious what sort of toll that takes on you as a human being?

“Everyone critizies you! Being famous is hard!” Uhhh... no it isn’t... as long as you don’t care what anyone says or does. It’s fabulous. The only thing that’s hard about it, and this is going to sound dumb, I miss going to gay bars and nobody knowing who I was. I miss going out with my boyfriend and not having to take pictures with anybody. Cause if I want to get next-level drunk, I don’t want my process to be interrupted.

I live in LA and a lot of people up here will be like, “I always pictured myself getting famous” or “I always knew this would happen” and for me, no, I’m some asshole from rural Wisconsin who likes dresses, so for me it is surprising but I always have one eye on the door because I think it’s all going to evaporate tomorrow.