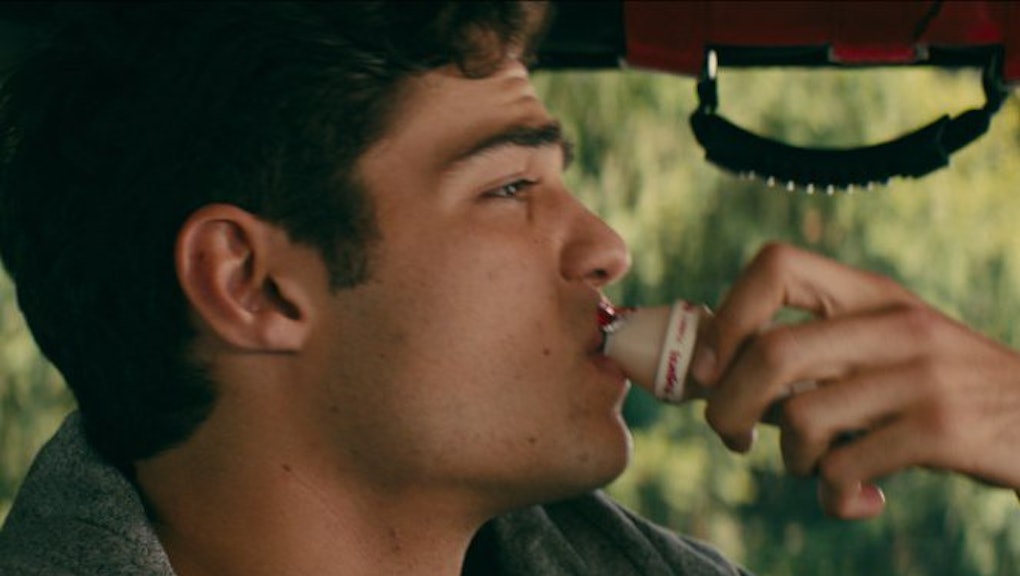 What’s more romantic than flowers and chocolate? A probiotic yogurt drink, thanks to a sweet moment in To All the Boys I’ve Loved Before, the adorable coming-of-age Netflix movie that has captured the hearts of many.

Yakult, a drinkable yogurt made of fermented milk that has been around for more than 80 years, has gotten an extra boost of internet fame since the movie’s release. In the film, the beverage makes an appearance briefly when protagonist Lara Jean’s younger sister, Kitty, refers to it as a “Korean yogurt smoothie,” Later, Peter Kavinsky, the movie’s central heartthrob, buys Yakult as a road trip snack for Lara Jean. And Twitter is here for it.

The drink, which is originally from Japan, only has a small moment in the film. But its presence — and the excitement it has stirred — speaks to importance of cultural representation in entertainment, as many recognized the popular drink of their childhood.

Yakult, something of a cult brand itself, is known for its sugary taste, distinctive peach color and digestive properties, made with over 6.5 billion cells that “help build immunity” and prevent diarrhea and constipation.

The drink is also a familiar staple in many cultures, sold in at least 33 countries, with a large volume of its sales in Asia and Latin America. (In fact, “Yakult ladies,” the modern day milkmen, go door-to-door selling Yakult in countries like Japan, Thailand, and Mexico, to name a few.) American consumers drink some 122,000 Yakult bottles a day, according to a 2011 statistic, though that’s just a tiny fraction of the company’s overall sales.

On Sunday, Bloomberg reported Yakult’s mentions on Twitter are spiking, thanks to Netflix’s release of the film on Aug. 17. As of Tuesday, Yakult’s stock was up nearly $3 dollars from its price during the week of the film’s release in August.

In an op-ed for the New York Times, Jenny Han, the author of the book from which the film was adapted, writes of her insistence on casting an Asian-American actress for the movie’s star role. “When you see someone who looks like you, it reveals what is possible,” she writes. Han is referring to the movie’s central characters, who are Asian, but her sentiment carries on to the foods they cherish, too.

And despite never being named in the Netflix film, Yakult was easily identified among Twitter users, many of whom are Asian and Hispanic, and speak of their longstanding personal connection to the drink.

“From the rice cooker on kitchen counter to Yakult to my 16-year-old announcing 10 minutes in ‘I’m invested,’ @jennyhan’s #ToAllTheBoysIveLovedBefore is a breakthrough,” one Twitter user said. “Hooray for more Asian girl representation on screen, and by representation I mean I saw that little bottle of Yakult (or at least its Korean counterpart), and I’ve never felt so represented,” another tweeted.

But some Twitter users feel this representation comes at a cost: What was once a Japanese yogurt stuffed in the lunchbox of many second-generation immigrants now feels trendy and appropriated. “I remember being made fun of for drinking Yakult at school and now because of a Netflix movie its suddenly cool now,” one Twitter user said. “Do y’all remember when you’d drink Yakult bc you grew up with it and not get assumed that you drink it bc of a movie,” another said.

American media is only just now shining a light on Yakult, but this shouldn’t feel new, because in the eyes of many Asian- and Hispanic-Americans, it simply isn’t.

While Yakult is likely more popular on Twitter now than it has been in recent years, some Asian grocers who stock the drink say nothing has changed in the real world. Mic reached out to six stores in the New York City area who sell Yakult to find out if Netflix’s film has impacted local sales of the drink. Many said the the drink is always popular and hadn’t noticed a recent spike, but one store recently sold out of its stock — and attributed the spike in sales to the summer weather.

Beyond yogurt sales and viewership, the film achieves a milestone in normalizing the Asian-American experience. Lara Jean lives in a world where Yakult, kombucha and Korean face masks are simply the norm, rather than the exception. In fact, conversations of race in the movie are nearly nonexistent, with the exception of one scene where Lara Jean and Peter watch Sixteen Candles, and Peter questions the racist portrayal of an Asian character named “Long Dong Duk.” Peter seems concerned and Lara Jeans seems ultimately unbothered, despite calling the character “extremely racist.”

And while a world that’s mostly ignorant of race isn’t always a realistic one, in the lives of some Asian-Americans, things as simple as kimchi or digestive yogurts aren’t seen as foreign — they’re as American as a hamburger or steak, and Hollywood just needs to play catch-up.