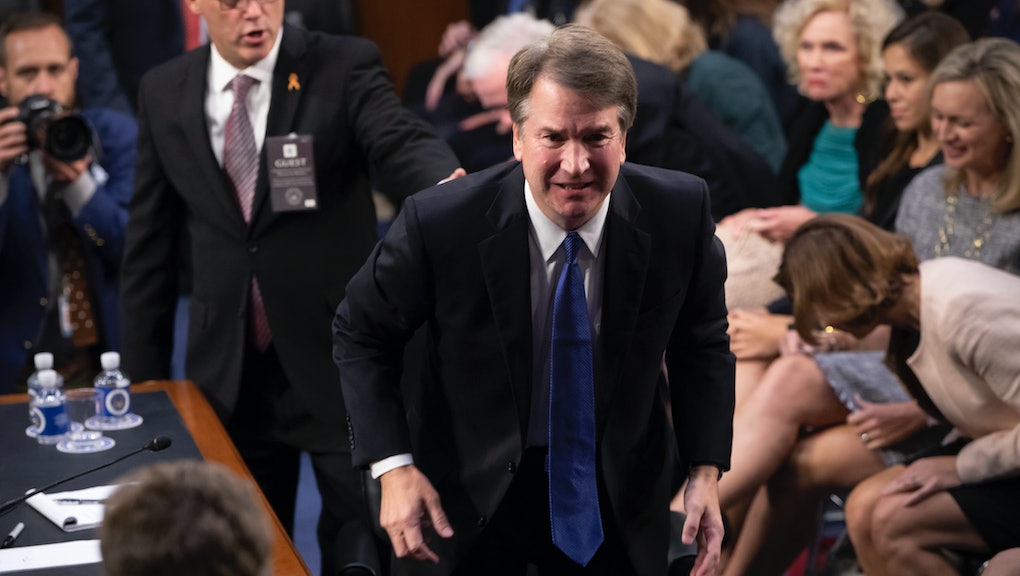 “It’s a sham”: Democrats call foul as Kavanaugh Supreme Court confirmation gets off to wild start

Brett Kavanaugh’s confirmation hearing had only just begun Tuesday when it started to go off the rails.

Democrats, objecting to what they said has been a rushed and opaque push to install Kavanaugh to the nation’s high court, lobbied for the hearing to be postponed so they could review the tens of thousands of documents related to the nominee’s record that were released late Monday.

It was perhaps a fitting kickoff to the confirmation hearing for Kavanaugh, President Donald Trump’s second Supreme Court pick. These are, as Democrats pointed out in a series of impassioned addresses Tuesday, “unprecedented” times — and with everything from reproductive rights to the power of the presidency potentially at stake, it only makes sense the hearing would be contentious.

The most fraught issue raised Tuesday was the confirmation process itself, which Democrats have said lacks transparency.

Their efforts to delay the hearing started before opening remarks began. Some 42,000 documents related to Kavanaugh’s record were released late Monday, and Democratic lawmakers on the committee said they hadn’t been given adequate time to review them.

Sen. Dianne Feinstein (D-Calif.), the committee’s top Democrat, contended the panel had “cast aside tradition in favor of speed.”

“I think you need to understand the frustration on this side of the aisle,” Feinstein told Grassley, comparing the hurried push to install Kavanaugh with Republicans’ stonewalling of Merrick Garland, former President Barack Obama’s choice to replace the late Antonin Scalia in 2016.

Democrats also raised concerns about Trump’s assertion of executive privilege on aspects of Kavanaugh’s record, suggesting the president and his allies have something to hide.

“What is the administration afraid of showing the American people? What is it trying to hide?” Sen. Richard Blumenthal (D-Conn.) said, calling for a vote to adjourn and postpone the confirmation hearing.

But Grassley refused to hold such a vote.

“Senators have had more than enough time and materials to adequately assess Judge Kavanaugh’s qualifications,” he said.

Elizabeth Hempowicz, director of public policy at the Project on Government Oversight, said in an email that she shares Democrats’ concerns about the nomination process, calling the lack of transparency heading into the confirmation hearing a “mistake.”

“We share the concerns raised at today’s hearing about the lack of access to documents from Judge Kavanaugh’s time at the White House and the frustration ... about the 42,000-document dump hours before the start of the confirmation hearing,” Hempowicz said. “We believe that allowing a claim of executive privilege to conceal thousands of pages of records from the Senate, when the claim hasn’t been exerted by either former President George W. Bush or President Trump, is a mistake.”

“In addition, moving forward with the nomination hearings at all before the National Archives and Records Administration has had a chance to complete its independent review of Judge Kavanaugh’s records for release to the Senate is another mistake,” Hempowicz added.

With Grassley denying requests to postpone the hearing, Democrats appealed to Kavanaugh to make his own request for a delay in the interest of transparency.

“We should not vote now,” Sen. Cory Booker (D-N.J.) said in his opening remarks. “We should wait.”

Kavanaugh did not appear to react to the back-and-forth rhetoric between Democrats and Republicans, nor did he visibly react to the protesters who shouted over lawmakers at various points throughout the proceedings, particularly during the opening hour of the hearing.

Grassley, for his part, appeared exasperated at times, lamenting his apparent loss of control over the hearing as the afternoon wore on.

In addition to their objections to the process, Democrats raised concerns Tuesday about Kavanaugh’s views on numerous issues, including reproductive and civil rights.

“The question we are being asked to address in this hearing, among others, is whether this judge, at this time in our history, will administer the law with equal justice as it applies to all citizens, regardless of if they live in a poor neighborhood or a rich neighborhood, or if they live in a small house or the White House,” Sen. Amy Klobuchar (D-Minn.) said in her opening remarks. “That is what this hearing is about.”

Trump — who has faced mounting legal and political pressure in recent weeks, including from special counsel Robert Mueller’s Russia probe — has continued to ramp up his attacks on the judicial system. In a particularly controversial Twitter outburst Monday, he railed against Attorney General Jeff Sessions over the recent indictments of two congressional Republicans, implying the Department of Justice should consider his allies above the law.

Democrats on Tuesday questioned whether it was possible Trump chose Kavanaugh, who has previously suggested he endorses a broad view of executive power, in an effort to protect himself legally.

Republicans, by and large, spoke in support of Kavanaugh, praising the nominee’s professional and personal qualifications for the job and insinuating Democrats were being obstructionists.

“I wish we could drop all the nonsense,” Sen. Orrin Hatch (R-Utah) said of Democrats’ objections, describing Kavanaugh as qualified and well within the mainstream. “I’m proud of the president for nominating you.”

Sen. Ben Sasse (R-Neb.) called criticisms aimed at Kavanaugh “drivel” and said the “hysteria” over his nomination was part of a decades-long slide toward partisanship in the Supreme Court confirmation process — the result, the Nebraska Republican said, of a “neutered” Congress that has punted its lawmaking responsibility to the courts and turned the judicial branch into a “substitute political battleground.”

“We can and should do better than this,” Sasse said.

Trump, for his part, lambasted Democrats as “mean, angry and despicable.”

“The Brett Kavanaugh hearings for the future Justice of the Supreme Court are truly a display of how mean, angry and despicable the other side is,” Trump tweeted Tuesday. “They will say anything and are only looking to inflict pain and embarrassment to one of the most highly renowned jurists to ever appear before Congress. So sad to see!”

When Kavanaugh finally spoke for himself late Tuesday afternoon, he thanked lawmakers for meeting with him and said he was “grateful” to Trump for his nomination. He also spoke in praise of his family, particularly his mother, Martha Kavanaugh, a former circuit court judge.

Kavanaugh also defended himself as an “independent” judge who will “interpret” the law rather than “make” the law, saying he would always “strive to be a team player” on a nonpartisan Supreme Court.

“I do not decide cases based on personal or policy preferences,” Kavanaugh said in his opening remarks. “I am a pro-law judge.”

Kavanaugh’s confirmation hearings are set to resume Wednesday morning, and will likely continue to be contentious amid Democrats’ assertions that “nothing about [the confirmation process] is normal.”

“Today, the Senate is not simply phoning in our vetting obligation — we’re discarding it,” Sen. Patrick Leahy (D-Vt.), who has presided over 19 such confirmations, said. “It’s not only shameful — it’s a sham.”