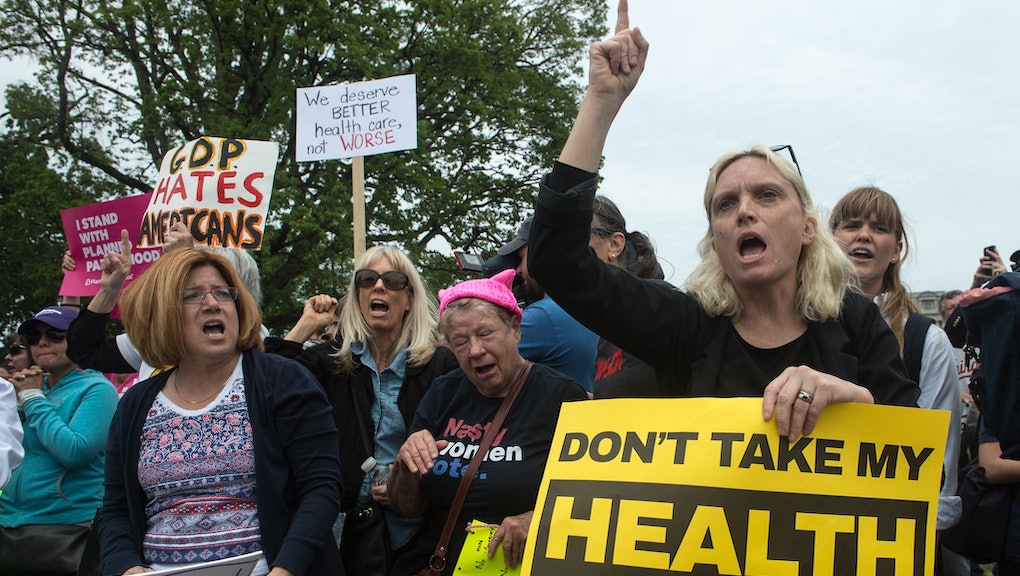 As Supreme Court nominee Brett Kavanaugh’s Senate hearing continues Wednesday, a lawsuit on the future of the Affordable Care Act is moving forward — and is potentially on its way to the high court.

District court hearings began Wednesday in Fort Worth, Texas, in a case brought by over a dozen state attorneys general and governors, who are arguing the ACA should be struck down. Led by Texas Attorney General Ken Paxton, the states claim that when Congress amended the ACA to remove the individual mandate tax penalty for Americans who don’t purchase health insurance, it rendered the ACA “unlawful.”

“The Patient Protection and Affordable Care Act ... as recently amended, forces an unconstitutional and irrational regime onto the states and their citizens,” the lawsuit reads. “Absent the individual mandate, the ACA is an irrational regulatory regime governing an essential market.”

In addition to Texas, the states signed onto the lawsuit are Wisconsin, Alabama, Arkansas, Florida, Georgia, Indiana, Kansas, Louisiana, Missouri, Nebraska, North Dakota, South Carolina, South Dakota, Tennessee, Utah and West Virginia, along with the governors of Maine and Mississippi.

Wednesday’s hearing will be a battle between Republican and Democratic-led states, as attorneys general from 16 states and Washington, D.C., challenge the lawsuit. Although the lawsuit is officially against the Trump administration and the U.S. Department of Health and Human Services, the administration said in a court brief it would not defend the lawsuit, as it too believes the ACA “must now be struck down as unconstitutional in light of the amendments that were made to it in the Tax Cuts and Jobs Act.”

Instead, the court allowed the Democratic states, led by California Attorney General Xavier Becerra, to intervene in the case, citing the states’ desire to “‘protect their own distinct fiscal, economic, sovereign and quasi-sovereign interests’ in the ACA and this litigation.”

“The Texas lawsuit is based on a dubious legal claim with the sole goal of stripping Americans of their health care,” Becerra said in a statement. “To roll back the clock and risk the health of millions of Americans is irresponsible and dangerous. We can’t and we won’t go back.”

Even if the ACA is not struck down outright, the law’s protections for Americans with pre-existing conditions to receive health insurance are at risk. In their court brief, the Trump administration argued the plaintiffs aren’t “entitled to a preliminary injunction” that would immediately strike down the ACA as they’ve requested because the individual mandate changes don’t take effect until 2019.

If the court agrees with the Texas-led states or the Trump administration’s arguments, there could be widespread effects for Americans. Nearly 9 million Americans signed up for ACA health care plans in 2018, and any change to pre-existing condition protections are also expected to apply to Americans who get their insurance through employers using ACA plans.

According to a 2011 analysis by the U.S. Department of Health and Human Services, between 19 and 50% of nonelderly Americans have a pre-existing health condition.

Despite the attacks from Republican-led states and the Trump administration, Americans remain broadly supportive of the ACA and its protections: A Kaiser Family Foundation poll in March found that 54% of Americans supported the ACA, and a separate KFF poll released Wednesday found 75% of Americans want the pre-existing condition protections to remain in place.

Because of this, the lawsuit could have broad political effects. Senate Republicans have already prepared for a potential ruling by introducing legislation protecting pre-existing conditions, though the legislation has been criticized for loopholes that allow would discrimination by insurers on the basis of age, gender or a person’s job.

The lawsuit is also set to play a role in the November midterm elections. Sens. Joe Manchin (D-W.Va.) and Claire McCaskill (D-Mo.), who both support the ACA and its pre-existing condition protections, are facing challenges from Republican attorneys general behind the Texas lawsuit. Both senators’ campaigns are highlighting their opponents’ role in the lawsuit, the Hill reported.

“Attorney General Josh Hawley went to court, and it could take away my health care,” a woman quoted by the Hill says about McCaskill’s opponent in a Democratic PAC-backed ad supporting the Missouri senator.

Even before the midterms, however, the lawsuit could play a key role in Kavanaugh’s confirmation process. During his opening statement during Kavanaugh’s hearing Tuesday, Sen. Cory Booker (D-N.J.) noted the case “could likely go before the Supreme Court.”

“Knowing your record, it is right that ... Americans, so many of them with pre-existing conditions, are asking whether the Supreme Court will be an institution that affirms and protects the rights of people with access to health care,” Booker said Tuesday.

Kavanaugh, a conservative-leaning judge who was appointed by President Donald Trump, previously upheld aspects of the ACA in rulings in 2011 and 2015. Neither of his arguments in those rulings relied on the merits of the ACA itself, however; Kavanaugh said the 2011 case should be dismissed for lack of standing, and the 2015 ruling merely said the ACA complies with the Origination Clause of the Constitution because it is a revenue-raising bill that originated in the U.S. House of Representatives.

In an op-ed for RealClearPolitics, Paxton described Kavanaugh’s nomination as “music to our ears,” though he did not specifically reference the ACA lawsuit.

The “Ginsburg Rule” means it’s unlikely that Kavanaugh will comment directly on the Texas lawsuit during his hearing; when asked Wednesday by Sen. Sheldon Whitehouse (D-R.I.) whether he would uphold a statute protecting pre-existing conditions, Kavanaugh declined to answer.

Kavanaugh’s perceived views on health care and the ACA, however, will likely have an impact on his Senate confirmation vote. Key Republican swing votes Sens. Susan Collins (R-Maine) and Lisa Murkowski (R-Alaska) both broke with their party by voting to preserve the ACA in July 2017, and both have said in statements on their meetings with Kavanaugh that they discussed protections for pre-existing conditions. McCaskill and Manchin, who are both undecided on Kavanaugh, have also specified health care and the Texas lawsuit as a key consideration for their vote; Sen. Doug Jones (D-Ala.), another swing vote, has spoken out in favor of the pre-existing condition protections.