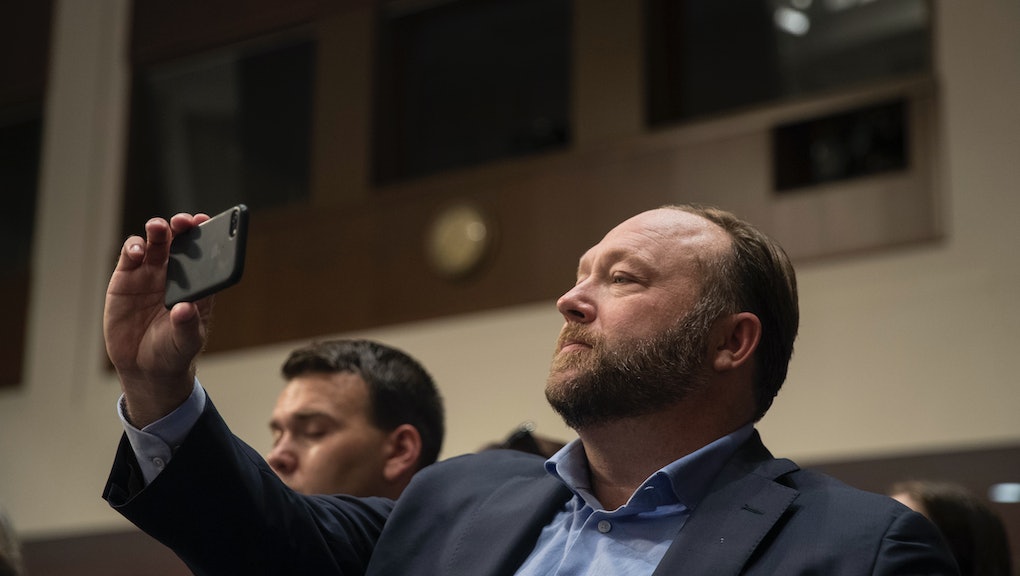 InfoWars host Alex Jones showed up to Facebook and Twitter’s meeting with Congress Wednesday. The social media host held his own press conference and talked over Sen. Marco Rubio as he interviewed with press.

Wednesday morning Twitter CEO Jack Dorsey and Facebook COO Sheryl Sandberg met with senators to discuss the spread of false information on their platforms and censorship of users deemed hateful or abusive. In recent weeks, Jones has seen his content removed from platforms belonging to Apple, Facebook, Spotify and YouTube for spreading conspiracy theories. For example, Jones has been a prominent voice in a movement to prove that the Sandy Hook shooting was staged. Families of victims of the shooting have been the victims of harassment (over the phone and in person) and death threats.

Before Facebook and Twitter’s congressional hearing, Jones held his own press conference. Speaking to cameras, Jones explained his reason for being in attendance. “This whole Russiagate thing is about delegitimizing the election that the people had in 2016,” Jones said. “As the president said, it is a witch hunt.” According to Jones, he deserved the ability to attend.

“We still have a right to face our accusers,” Jones said.

With a front row seat to the hearing, Jones watched Dorsey and Sandberg answer questions regarding user privacy, account bots that pose as humans and harassment on social media platforms. One reporter noted that Jones spoke into his phone’s camera even within the meeting room.

Following the proceedings, Jones stood outside heckling Rubio as he interviewed with the press. As Rubio spoke, Jones spoke over him. “The Democrats are doing what you said China does,” Jones said. “What about the Democrats purging conservatives,” Jones said, cutting off Rubio’s answer to a journalist with CNBC.

Rubio claimed to have no idea who Jones was. The InfoWars host went on to call Rubio a “frat-boy” and a “little gangster thug.”