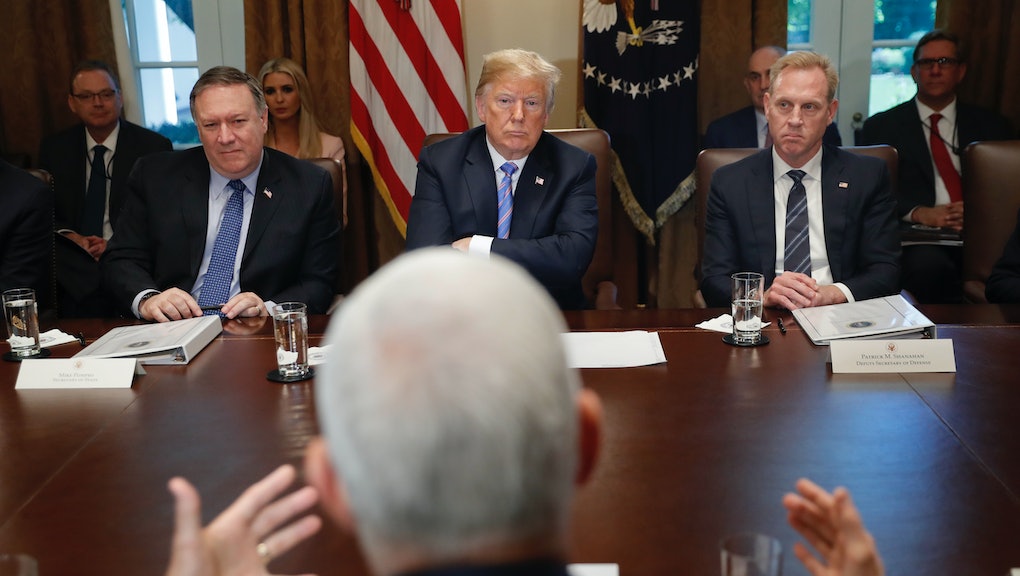 The bombshell anonymous New York Times op-ed published Wednesday afternoon is said to speak for many in President Donald Trump’s White House. Yet none will attach their name to it — perhaps because their Cabinet-level job would be “jeopardized” if they do so.

Vice President Mike Pence, Secretary of State Mike Pompeo and Director of National Intelligence Dan Coats have each denied authoring the op-ed, which detailed an anti-Trump “resistance” within the administration.

The op-ed from the anonymous author — an extremely rare tactic for the publication — describes a senior White House staff actively working to protect the United States from its own president’s “erratic behavior” and his “worst inclinations,” has thrown the administration into even greater tumult — and drawn cries of “TREASON” from Trump.

“Does the so-called ‘Senior Administration Official’ really exist, or is it just the Failing New York Times with another phony source?” Trump tweeted Wednesday evening. “If the GUTLESS anonymous person does indeed exist, the Times must, for National Security purposes, turn him/her over to government at once!”

Since the op-ed was published, speculation has abounded as to who authored it. Some observers have zeroed in on Pence, due to the anonymous author’s use of the word “lodestar” in the op-ed in reference to the late Sen. John McCain (R-Ariz.). Pence has used the word numerous times in the speeches in the past.

A spokesperson for the vice president denied that Pence was behind the op-ed, saying in a statement Thursday that the Times “should be ashamed and so should the person who wrote the false, illogical and gutless op-ed.”

“The vice president puts his name on his Op-Eds,” Pence’s spokesperson Jarrod Agen tweeted. “Our office is above such amateur acts.”

Pompeo also denied penning the op-ed, describing the piece during an address in India as part of a “disturbing” effort to “undermine this administration.”

Coats also said in a statement that suggestions he or his deputy wrote the op-ed were “patently false.”

That no one so far has come forward to claim the piece, which the Times printed without a byline because its author’s “job would be jeopardized by its disclosure,” has drawn criticism — including from critics of the president. Charles C.W. Cooke, writing in the conservative National Review, described the piece as a “disgrace” and a “threat to our constitutional order.”

“There are mechanisms in place to deal with an unfit president in the White House,” Cooke wrote Thursday. “This was not one of them.”

David Frum, one of Trump’s most ardent conservative critics, slammed the author and others silently undermining the president as “cowardly,” calling on the so-called “resistance” figures in the White House to take concrete, public steps to end the Trump presidency.

“If the president’s closest advisers believe that he is morally and intellectually unfit for his high office, they have a duty to do their utmost to remove him from it, by the lawful means at hand,” Frum wrote in the Atlantic on Thursday. “That duty may be risky to their careers in government or afterward. But on their first day at work, they swore an oath to defend the Constitution — and there were no ‘riskiness’ exemptions in the text of that oath.”

The author of the op-ed describes himself as one of several Trump officials who have “vowed to do what we can to preserve our democratic institutions while thwarting Mr. Trump’s more misguided impulses until he is out of office.” The writer characterizes this group as “unsung heroes” who have “gone to great lengths to keep bad decisions contained to the West Wing.”

Two senior Trump officials later told Axios that the author had “stole the words right out of their mouths” — and that “dozens and dozens” of others in the administration feel the same way.

The piece is just the latest indication that the administration, which Trump has described as a “smooth running machine,” is in an even deeper state of chaos than previously known. It echoes reporting by journalist Bob Woodward, whose forthcoming book on the Trump administration has rattled the White House this week as excerpts began surfacing in the media.

Portions of Fear: Trump in the White House that have surfaced in the press this week have described senior aides attempting to contain an unhinged, unqualified Trump as he lashes out against those close to him.

The White House said in a statement Tuesday that the book was full of “fabricated stories” intended to “make the President look bad.”