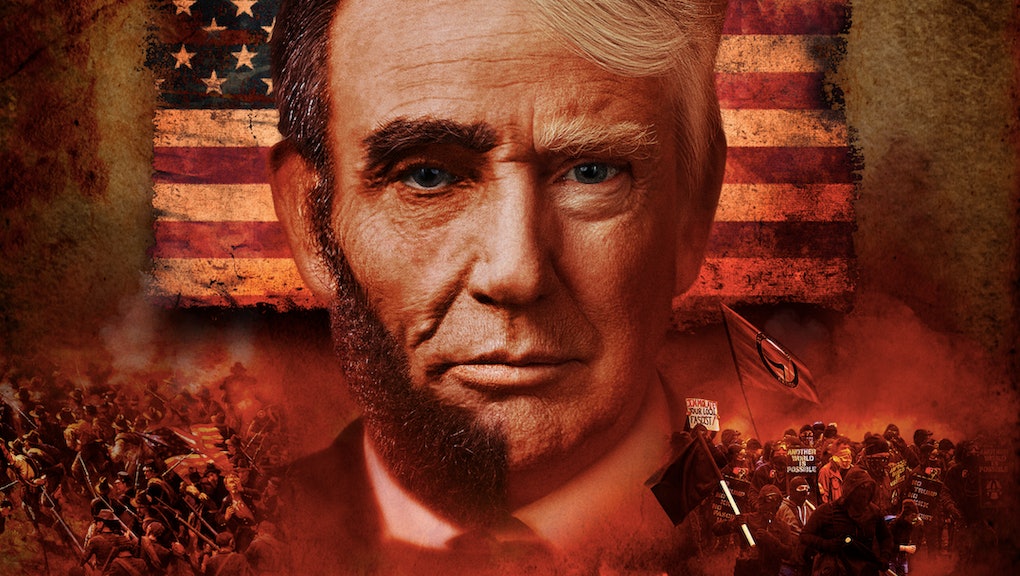 One of the most lucrative political documentaries of the decade is making millions in theaters right now, though you won’t find it in a single theater in cities like New York City or San Francisco. If you’re a progressive, you might not have even heard of it. But conservatives across the country are eagerly adopting its revisionist view of history.

In Death of a Nation, filmmaker and conservative provocateur Dinesh D’Souza continues the argument he made in his 2017 book The Big Lie, claiming that today’s Democratic Party is carrying on the legacy of slavery, racism and fascism in America and that President Donald Trump is the only one who can carry on the legacy of Abraham Lincoln to save the country from destruction.

D’Souza is a singularly effective conservative propagandist. He’s made three of the top ten most lucrative political documentaries of all time. In Death of a Nation, he brags that the success of his last film, Hillary’s America, helped elect Trump, who then pardoned D’Souza for the director’s felony charge of making illegal campaign donations.

The definition of “fascism” has historically been a challenge to nail down. Many of the world’s best historians argue that fascism is neither explicitly left-wing nor right-wing, but a form of nationalistic political behavior that, in moments of crisis, uses militant populism to subvert democracy and put a stop to socialist uprisings. Scholars and experts have accused D’Souza of cherry-picking from history in his books and films to argue that fascism is a purely left-wing, progressive ideology.

For his part, the filmmaker has suggested that because fascist governments have often implemented large social programs, all modern welfare programs are fascist. He also likes to compare modern progressives who favor raising taxes to Nazis since Adolf Hitler’s party seized the property of Jews in Europe.

So why would top experts of actual fascist history entertain the notion of sitting down for an interview and giving credibility to D’Souza’s historical claims? In some cases, because D’Souza’s team reportedly hid the true nature of the project from plain sight.

Robert Paxton, one of the preeminent historians of fascism and the author of one of the most highly cited definitions of the term, said in an email that he was “drawn into an interview with Dinesh D’Souza under false pretenses.” And though Paxton is the only fascist historian who was explicitly duped into eventually appearing in the film, he’s not the only one who was approached without knowing what kind of film the producers were making.

It’s not an interview Paxton would have given had he known he was sitting down with the director who has taken several shots at him over the years.

Last year, D’Souza accused Paxton of being a partisan hack and in The Big Lie, D’Souza wrote that Paxton refuses to admit that fascism is a leftist ideology so that he can maintain “his scholarly bona fides.” D’Souza concludes in a chapter called “Falsifying History” that Paxton is lying by omission, and decides Paxton is not even really a scholar of fascism.

So while it might seem strange for a scholar who once testified as an expert in a trial for Nazi collaborators in France to agree to appear in a documentary directed by one of his harshest critics, Paxton says there’s a simple explanation — he was never told he’d be sitting down to participate in a D’Souza’s film.

The first of D’Souza’s team to contact Paxton was Kate Rather, who reached out in September 2017 to arrange an interview for a documentary that would “facilitate intelligent conversation regarding the current opportunities and challenges that America is facing, while exploring fascism in the U.S. today.” In emails reviewed by Mic, she mentioned that she was working with producer Gerald Molen, and boasted that Molen had won an Academy Award for co-producing Schindler’s List. Rather kept in touch with Paxton through September and October to arrange an interview date, never mentioning D’Souza’s involvement.

Rather sent emails to Paxton and other interviewees for the film from an account with the dmlfilm.com domain. The website is a single page, showing the company name, a contact form, an email address, a phone number, an address in La Jolla, California. There is no mention that its sole proprietor is none other than Dinesh D’Souza.

On Nov. 6, 2017, the day before the scheduled interview, Paxton got an email from producer Aaron Brubaker confirming the date. Brubaker is a long-time collaborator of D’Souza’s, but, again, didn’t mention D’Souza’s involvement. Brubaker also used the dmlfilm.com email address, instead of his active dineshdsouza.com email address.

The next day, at Columbia University, Paxton sat down for the interview. They set up the shot, put a mic on the professor and, at last minute, brought in D’Souza, who sat down and immediately began the interview.

“There were no introductions,” Paxton said. “I began to suspect it was Dinesh D’Souza, but I had no way of being sure. So I did not break off the interview.”

It was only after the interview, when he heard the production staff referring to the man as “Dinesh,” that Paxton realized who he was speaking to. Mic reached out to Dinesh D’Souza and Aaron Brubaker for comment, but did not hear back from either.

Before parting ways, D’Souza told Paxton that his team reached out to other historians of fascism, such as Yale University’s James Whitman and Timothy Snyder. When Paxton got back to his home near the university, he emailed a warning to Whitman, who then forwarded along that warning to Snyder.

Snyder’s assistant said in an email that D’Souza’s production staff had, in fact, contacted Snyder with “a false description of their project, and without mentioning its affiliation to Dinesh D’Souza,” but hadn’t yet confirmed that Snyder would give an interview. She called the interaction “very strange” and “definitely carried out under false pretenses.” But once D’Souza secured the interview with Paxton, Snyder never heard from D’Souza’s team again.

Other historians interviewed for D’Souza’s film knew what they were getting into, but saw it as their job to deliver their expert opinions nonetheless.

Dr. Allen C. Guelzo, a leading Civil War historian who serves as the director of the Civil War studies program at Gettysburg College, was interviewed for a part of the film in which D’Souza claims that slavery is, and has always been, a “progressive” institution. Guelzo said in an email that he hasn’t seen the film, but added that he’ll answer anyone’s questions on American history.

Another expert in D’Souza’s film is Edwin Black, an investigative journalist who appears briefly to speak with D’Souza about eugenics. Black said that the film’s producers made no attempt to hide D’Souza’s involvement. Black watched Death of a Nation, and feels as though his expertise and comment was presented fairly, without deceptive editing. For Black, there’s an important difference between the objective facts of history, and the way that a filmmaker uses those facts to construct his or her interpretation of that history.

“This was more than a typical documentary, it was a personal statement by the director complete with singing of songs, employing inspiration and cinematic persuasion atop a fact predicate, as Michael Moore often does,” Black said in an interview with Mic. “The viewer will judge the singers, the partisan points, and the historical facts separately on their own merits.”

Paxton admitted in his interview that both Mussolini and Hitler “set up and ran welfare states,” a clip that appears in the film’s trailer. But during the interview, Paxton also says he forcefully pushed against the idea that fascism is a feature of progressive ideology, explaining that while fascists of the 20th Century often used leftist rhetoric and appeals, they went on to betray those principles in favor of corporatism and conservative elite.

In Paxton’s book The Anatomy of Fascism, he explains in extensive detail how fascism cloaks itself in socialistic appeals in a counter-revolutionary effort to quell an authentic socialist uprising.

“Fascism comes along as a way of mobilizing a mass movement, which is anti-socialist or anti-communist,” Paxton said in an interview in September 2017 at his home in New York City. “Socialism is a label, and they do some things for the workers; fascism was the barrier to communism.”

The mainstream press, for the most part, isn’t buying it. The film has a 0% rating on Rotten Tomatoes. Variety called the film a “demented” and “brainwashing” rewriting of history, the Guardian called it “angry nonsense,” and the Arizona Republic called the film “poor even by Dinesh D’Souza’s standards.” Still, given that Death of a Nation is already the twelfth most lucrative political documentary of all time, and is still in its limited theatrical release (his documentaries make much more in direct sales), Death of a Nation is already a hit in the conservative cannon.

Although Paxton finds D’Souza’s conclusions to be a distortion of history, at least he doesn’t feel as though his particular interview was chopped up to misrepresent what he said in the interview, even if it was used as a building block in a partisan revision of history.

“I suppose it could be worse,” Paxton said, “But it’s always embarrassing to be conned.”