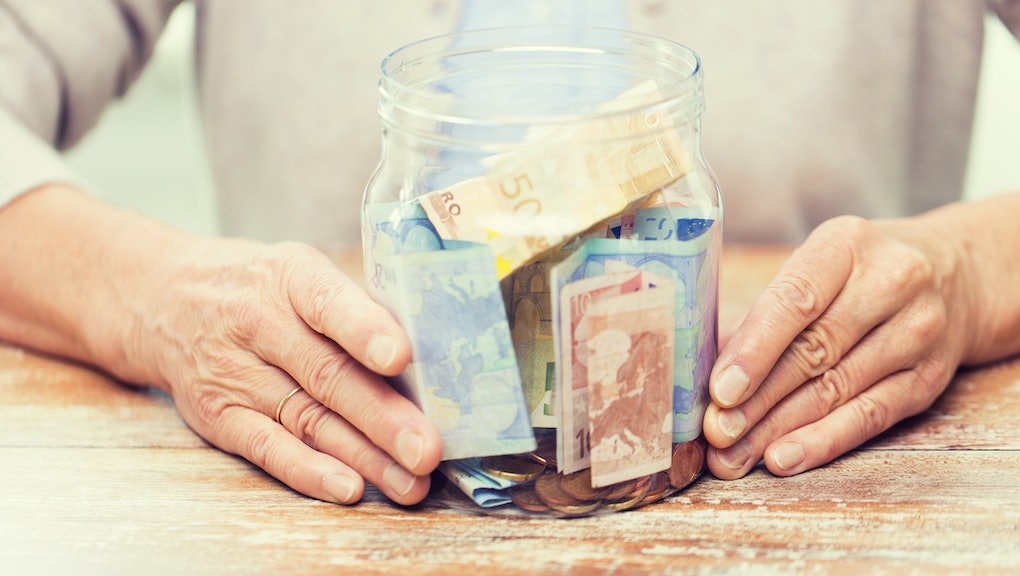 Love and Money: What to do when your parents haven’t saved for retirement

By the time parents reach retirement age, their children have probably figured out that they’re not perfect people. Still, it’s an unpleasant shock to learn that the people who may have given you an allowance and taught you the word “budget” haven’t been so fiscally responsible themselves when it comes to their own retirement.

The scenario sounds like a nightmare but is brutally common. Only 21% of workers in the national 2016 Retirement Confidence Survey said they feel very confident that they’re saving enough for a comfortable retirement; 26% of workers say they have less than $1,000 in savings or have no retirement plan at all. Citing data from the Federal Reserve and a Banknote survey, CNBC estimated this year that people approaching retirement age (between ages 55 and 64) have a median of $120,000 saved for retirement, or only 12% of what they’ll need.

A frank conversation with your parents about their finances is tough, but it’s better to handle it now than live with a sense of anxiety for years to come. You could ask directly, or slide into the conversation sideways by discussing your own retirement plans, Joleen Workman, vice president of customer care at Principal Financial Group, said in a phone interview. “You might say, ‘I’m setting my budget and this is what I’m thinking for retirement’ or ‘I just got a new job and I want to save 6% for the company match,’ for example. Then your parents can share where they are,” Workman said. “It can open the door to a two-way conversation and put you in a positive place where you can make suggestions to them based on your own research.”

Once the conversation’s begun, here are some additional tips:

Yes, you’re supposed to spend your whole life saving up for this moment and hoping those savings grow, but if older workers have empty pockets they can still start now. “Certainly you should never think the ship has sailed,” Arielle O’Shea, an investing and retirement specialist at NerdWallet, said in a phone interview. “In fact, when you’re older, especially 50 or older, you can actually save more in tax-abated accounts. The 401(k) limit gets higher, you can put an extra $1,000 in an IRA. You should take advantage of that if you are getting a later start.”

The federal government has other incentives to encourage older people to save. “If they don’t need social security, they should put off collecting the benefit as long as they can,” Tom Foster, a spokesperson for the retirement services at MassMutual, said in a phone interview. “For every year you go beyond normal social-security age, you get an 8% bump.” For example, the Social Security administration currently defines retirement age at 66 for those born between 1943 and 1954; at 66 years old, a person can opt to receive 100% of their monthly benefit. But if they wait (by staying in the workforce and/or living off savings) and leave their money with the feds until age 67, it becomes 108%, at 68 it becomes 116%, and so on until it’s capped at age 70. “It’s hard to find an investment that will give you that 8% bump,” Foster said.

“The first thing I’d do is get a concrete idea of what they have, and what they’re going to need,” Foster said. Sit down with your parents and get extremely real about the numbers. “I would list all of their various assets and deductions right now — their mortgage, real estate tax, rental condo or HOAs, utilities, credit cards, entertainment expenses, charitable donations. I’d come up with a monthly total, then look at their life expectancy, then multiple by how many months left to see what income they’ll need.” The stark facts may jolt them into movement. If the project is too overwhelming, you might encourage them to...

While some may believe hiring an outsider is a luxury, such an expense could make your parents more money in the long run — and all our experts suggested it. “I think it’s absolutely worth it to speak with a certified financial planner, someone whom you pay a flat fee to give you some advice,” O’Shea said. For one, “Garrett Planning Network is a coalition of people you can pay by the hour. They’ll tell you how to look at the resources available.”

You know how we keep trying to improve on the weight-loss equation of “eat less, work out more,” and we can’t? Same concept here: Nothing is going to help your parents’ retirement prospects like refusing to retire. “Many think 65 is the time to retire, but as they’re getting closer to that age … what individuals realize is, I’m still active and I haven’t saved as much as I’d like, I could keep working until I’m 66, 68, 70,” Workman said.

“If they want to work and they can work, god bless them,” Foster said. “If they don’t want to work, that’s a problem. Either you don’t have a choice, or you have to adjust your expenses and live differently.” Folks could consider leaving their “official” job at age 65 or so, and then taking part-time work or a less stressful gig so they still feel like they’re getting the vacation they’ve been looking forward to for the last half century.

Figuring out how to pay for late-in-life health care expenses or facilities is a whole other (painful) kettle of fish, but while you’re being awkward with your folks, why not at least address it here?

“Even people who have saved for retirement have often not covered themselves for extended care,” O’Shea said. “[Facilities] are expensive, and you’re probably better served by trying to save for retirement. She recommended discussing it with that financial planner or money manager while you or your parents have the chance.

Finally, set boundaries for yourself

Yes, there is a possibility that your parents may want help, or that you may feel obligated to provide it. “I think it’s important to set boundaries and expectations,” O’Shea said. “If you’re willing and able to help, you may want to do that, but you should be clear about how that help will come and how much you can actually help. We always say, parents should not put their children above themselves in terms of saving for college instead of retirement, but I think the same thing is true of kids and parents. You don’t want to sacrifice your own retirement savings to help your parents. That only continues the cycle.” If you help them too much, then your kids will have to help you. Assist your parents via some emotional support and these awkward talks, then consider checking on how your own 401(k) is doing.