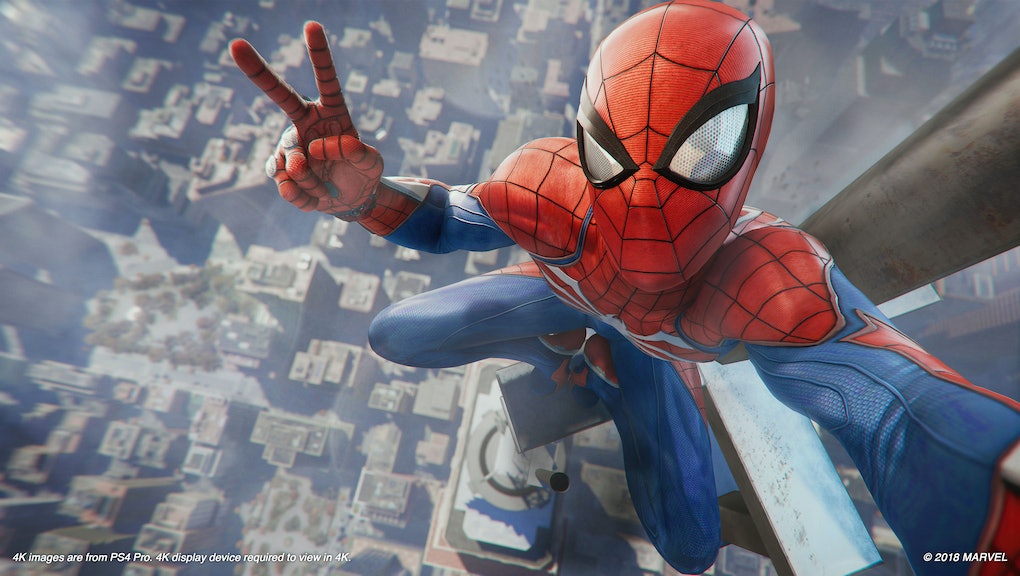 Spider-Man, the hotly anticipated video game recently released on PlayStation 4, lets you assume the role of Peter Parker and his high-flying, superhero alter ego. The game allows you to swing around New York City and fight crime — while you’re also dodging phone calls from your landlord.

It’s a dynamic story that fans are plenty familiar with — Spidey’s been a fixture in pop culture for decades, appearing in comic books, TV shows, movies and more. And PS4’s Spider-Man draws on various elements from all of those earlier tellings. To help players pick up on some of the different references and Easter eggs, we’ve compiled this mini-guide with the help of the game’s creators, who recently talked with Mic about some of their favorite references in the game.

“Our goal was to find the right balance between the familiar and the fresh,” Bryan Intihar, creative director at Insomniac Games, said in a call. “We wanted to have the confidence to bend and twist these characters in ways we haven’t seen before, while also being respectful to the franchise.”

And with that, let’s look at how the new Spider-Man nods to the hero’s mythos.

A callback to a Spider kiss

Some of the most recognizable references in the new game allude to the early 2000s’ Spider-Man films. “After the end of the main [Kingpin] boss fight, Spidey is hanging upside down and says, ‘So, should we kiss now,’” Jon Paquette, lead writer on the game, told Mic over the phone. According to Paquette, this moment is a wink at the iconic upside-down kiss from director Sam Raimi’s 2002 Spider-Man film.

But that isn’t the only callback to that massively successful blockbuster series. “We reference the second Raimi Spider-Man film, too,” Paquette said. “There’s a scene in the movie where Spidey stops a runaway train. In our game, when he tries and fails to use his web to stop the train he says, ‘Whoa, that totally worked last time.’”

The PS4’s Spider-Man lets players interact with antagonists like Rhino, Dr. Octopus (who we see as Pete’s boss, Dr. Otto Octavius) and the lesser-known villain Mr. Negative, who’s actually the main baddie. Other villains, however, didn’t make the cut. Baddies like Mysterio, Lizard and Sandman can’t be found in the game, but we do see glimpses of them via the game’s items.

Players discover said collectibles by digging up old backpacks that Spidey’s webbed to various corners of the city over the years, presumably right before running off to save the day. “We used the backpacks as a tool to tell the story of what Peter has been doing [as Spider-Man] for the last eight years,” Intihar said. “For example, one backpack has a menu from the restaurant where Peter and Mary Jane had their first date. Another contains a ticket stub from a game Peter went to with Uncle Ben.”

The Spider-Man 2 game for PS2, which was released in 2004 to coincide with Raimi’s film of the same name, included a mini-game in which Peter used his Spider powers to deliver pizzas. “When we first showed the game two years ago, everyone asked us if there were pizza delivery missions,” Intihar said. Instead of adding the mini-game to this version, the team threw in a memento from Spidey’s pizza-serving days instead. Via a backpack, players can dig up Spider-Man’s old pizza delivery hat. Pizza not included, unfortunately.

Other Marvel characters exist in the PS4 Spider-Man universe, too

Other heroes are references in the Spider-Man PS4 game, too. The writer Paquette noted one backpack contains a business card for the law firm Nelson and Murdock, belonging to Foggy Nelson and Matt Murdock. Fans of the comics, or Marvel’s Netflix series, will know that Murdock is more popularly known as Daredevil, protector of New York’s Hell’s Kitchen.

“Of anything in the game, the suits are where we’re really nostalgic,” Intihar said. “It lets us show some of the classic favorite suits and highlight things we haven’t seen in a game before.”

Intihar also noted this is the first Spider-Man game to come out since Spidey joined Disney’s Marvel Cinematic Universe. Accordingly, the team included all the suits we’ve seen actor Tom Holland don as Spider-Man. The Iron Spider, the Stark Suit and the DIY homemade suit all make an appearance.

Even though there are plenty of different suits in the game, Spider-Man’s sleek, black symbiote suit is nowhere to be found.

In one of Spider-Man’s most popular stories, a mysterious, inky-looking alien blob, known as a symbiote, finds its way to Peter Parker and enhances his abilities. The symbiote eventually changes hosts, moving on from Peter to Eddie Brock, who eventually comes to be known as Venom (just ask Tom Hardy).

So why isn’t the symbiote suit in Spider-Man? Because the game’s creators didn’t want to include it without including the story of Venom, too. “I’ve gotten a ton of angry tweets for not including the symbiote suit,” Intihar said. “We know it’s a fan favorite, but that suit is tied to a very specific character and abilities. Hands down it was our toughest decision.”

Even if the symbiote suit would’ve been a nice touch, there’s plenty of other Easter eggs and references to savor. Just keep your eyes peeled while you’re swinging around the city.