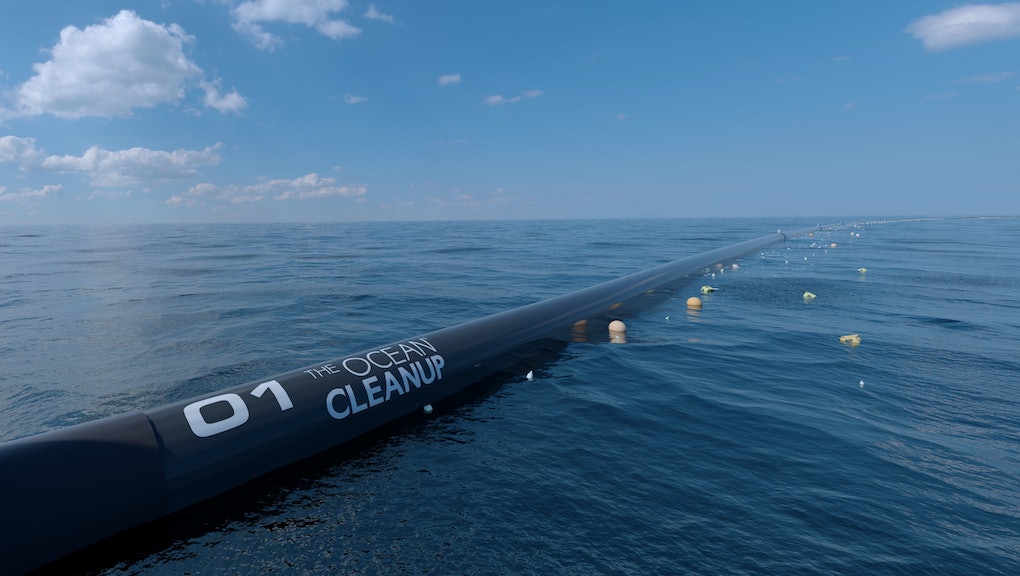 Some 8 million tons of plastic waste enter our oceans every year. And while bans on widely vilified plastic straws and grocery bags may curb the issue of future pollution, there’s still one problem — what exactly do we do with the plastic that’s already in our oceans? On Saturday, the Ocean Cleanup, a Dutch company, launched the “largest cleanup in history” to tackle this problem, and collect the nearly 1.8 trillion pieces of plastic endlessly floating in the Pacific Ocean.

Since the 1970s, the Great Pacific Garbage Patch, located between California and Hawaii (that’s the real name for one of five major areas of trash in our oceans), has grown exponentially. It spans nearly 1.6 million square kilometers, an area three times the size of France, and is the largest accumulation of ocean plastic in the world.

In the past, the problem of collecting trash from a patch has been a tricky one, Lonneke Holierhoek, chief operations officer of the Ocean Cleanup, said over the phone.

The Ocean Cleanup spent nearly five years researching and designing its U-shaped floatation device (not unlike a massive pool noodle). Using natural forces, like the ocean’s currents and wind, plastic debris will collect in the center of the device. Every few months, a vessel — or “garbage truck of the seas,” as the Ocean Cleanup’s website calls it — will come and remove the plastic, which will be returned to land for processing and recycling. The 1,969-foot floatation device is entirely autonomous, and controlled and monitored electronically, Holierhoek said.

Despite its name, a patch isn’t a floating plastic island in the middle of the ocean, but rather, trash spread across entire oceans, which have made efforts to collect the garbage difficult. “It’s pretty sparse and there’s a lot of room in between different pieces of plastic, so if you had to collect them one by one, it’d be a very inefficient operation,” she said.

And while plastic may not be the only pollutant in our oceans, among discarded items like fishing nets and gear, it’s one of the most dangerous pollutants, according to Nicholas Mallos, director of the Trash Free Seas Program at the Ocean Conservancy. “The tremendous qualities that make plastic so valuable in our everyday lives — its durability, its cold and heat resistance, its flexibility — are also the same qualities that then make those plastics so damaging,” Mallos said over the phone.

How the U.S. contributes to the plastic problem in our oceans

So where is all this plastic coming from? Well, there isn’t a way to trace the origin of every single piece of plastic, Holierhoek said, and the trash in the Great Pacific Garbage Patch dates back several decades. But polluted rivers that carry trash from the U.S. and Asian countries that enter into the Pacific could be to blame, she added. In fact, a recent study found just 10 rivers in the world make up about 90% of the plastic debris that ends up in our oceans — and the U.S. single-handedly contributes somewhere between 40,000 and 110,000 metric tons of it each year.

According to Mitch Hedlund, founder of Recycle Across America, simple littering on U.S. beaches plays a significant role in the plastic problem in our oceans. And according to the Environmental Protection Agency’s website, our sewage problem could be another factor. In many American cities like New York City, combined sewer systems are common. In this type of sewer system, an event like heavy rain combines with sewage and often inundates a sewage treatment facility — and directly overflows into rivers. In fact, more than 860 billion gallons of sewage enters U.S. waterways each year, which includes nonbiodegradable plastics like eye contacts and microbeads you’d find in face scrubs or body washes.

And according to Hedlund, U.S. consumers have trouble with recycling, which results in the littering of our beaches and oceans, she said over the phone. Hedlund said consumers are confused, in part, because there is no standardized labeling system for recyclable materials — and some recycling facilities aren’t exactly in a hurry to change that.

“The most dominant and influential recycling company in the U.S. is owned by a landfill company, and 90% of their business is landfill,” she said. “And yet they hold the microphone and influence what happens with recycling in the U.S. The best way to protect your massive revenue is to make sure that recycling doesn’t work very well. It is the most disturbing conflict of interest for our environment and for the public.”

“The most dominant and influential recycling company in the U.S. is owned by a landfill company. ... It is the most disturbing conflict of interest for our environment and for the public.” — Mitch Hedlund

She said that legislation likely won’t solve the problem of this conflict of interest any time soon, but said a growing consumer awareness of this problem will help to improve our recycling programs and curb the amount of plastic entering our waterways.

Plastic in our oceans poses both economic costs and health risks

Littering our oceans is an expensive habit, it seems. A 2013 study found that California spent a combined $428 million cleaning up litter and preventing it from entering waterways each year. A 2014 report by the United Nations Environment Assembly found plastic pollution causes nearly $13 billion in damage to marine life, and some say that number may even be a conservative one.

And while it’s easy to think garbage floating in the middle of the ocean, hundreds of miles away from any coastline, has no tangible effect on us, that’s simply incorrect. Plastics don’t break down like other materials, Mallos said, and instead, break up into smaller and smaller pieces, even too small for people to see (these are known as microplastics). Marine life, including fish and birds, can mistake these plastics for food and ingest them in astronomical numbers.

It’s estimated more than 100,000 marine mammals and 1 million birds die as a result of plastic ingestion from our oceans each year. “We’ve found turtles dying of plastic ingestion because they can’t digest it,” Holierhoek said. “Different studies even show that between 200 and 800 species of marine life are threatened by the presence of plastic to the point of extinction. And we are the end of this food chain — we eat some of those organisms.”

And while studies following the human health risks associated with plastic ingestion are scarce, there are a number of issues of concern, including risks associated with consuming chemicals used in plastic manufacturing, as well as bacteria that could pose a danger to our circulatory system, organs or even cells.

Will the Ocean Cleanup work?

On Saturday, the Ocean Cleanup launched System 001 from Alameda, California, its first attempt at tackling the enormous plastic problem in the Pacific Ocean.

But some claim the efforts by the Ocean Cleanup may not be as effective as desired. For one, microplastics like microbeads can sink to the bottom of the oceans, thereby escaping the device entirely. Other critics said if the device were to fail, it would become another piece of garbage in the patch — or, the “world’s biggest piece of marine debris.” And if the device attracted fish and other marine life, it would only make them more vulnerable to eating plastic, with the device collecting copious amounts of it at its center.

Despite criticism, Holierhoek said the Ocean Cleanup intends to roll out a full fleet of 60 similar devices — with the goal of removing at least half of the existing trash in the Great Pacific Garbage patch within five years.

How can consumers help with the plastic problem?

According to Holierhoek, areas like the Great Pacific Garbage Patch are in open seas, and thus, fall under no particular country’s jurisdiction, which can give the impression of a lack of responsibility on many countries’ part. “In open seas, no one’s really responsible for [the plastic],” she said. “But at the same time, everyone’s responsible for it because it’s our legacy.”

Holierhoek said for improvements to be made regarding plastic and garbage in our oceans, different countries need to commit to recycling — and Hedlund said consumer awareness in the U.S. is key, as well as a standardized consistency to our labeled recycling bins and products.

“When recycling cultures are strong in countries, the general public understands what they’re holding in their hands, like a can or a plastic bottle — they’re seen as valuable,” she said. “In cultures where there isn’t a social movement [behind recycling], then those materials aren’t seen as anything other than a nuisance or trash and people won’t dispose of them properly.”

And according to Hedlund, when all else fails, the first step is taking proper action and simply throwing something away in the trash and recycling whenever possible — and knowing your actions have direct consequences on our environment. “It’s like a chess game, in a way,” she said. “You can’t take one move without thinking about the fact that it’s probably going to affect a move three moves away — you might not see it right away, but everything we do has a ripple effect. And if anyone isn’t thinking that, they’re being self-destructive.”