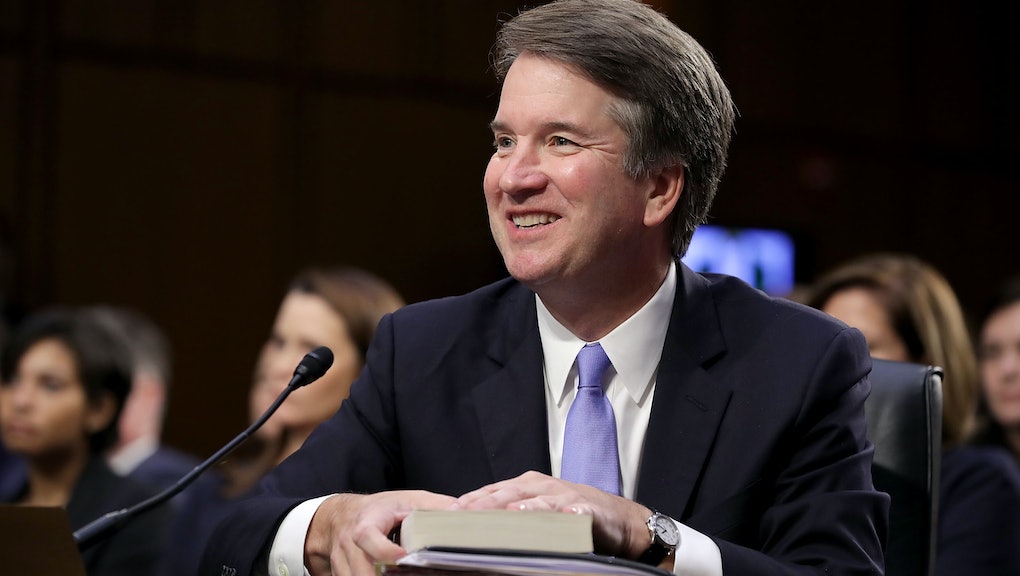 After a rocky Senate hearing and accusations of perjury, what’s next for Brett Kavanaugh?

With the next Supreme Court term set to begin Oct. 1, the clock is ticking for Kavanaugh to either be confirmed or stopped from moving on to the bench by Democrats and two swing-vote Republicans. Though Kavanaugh’s nomination has been burdened by controversy on key issues like reproductive rights and presidential power — and with activists now pushing for an official perjury investigation into the judge — his fate will ultimately be decided by a handful of swing-vote senators who face a tough decision in the coming days.

It likely won’t be long before the Senate votes on Kavanaugh’s confirmation, which has to clear the Senate Judiciary Committee before proceeding to a full vote on the Senate floor.

Judiciary Committee chair Sen. Chuck Grassley (R-Iowa) has scheduled the committee’s vote for Thursday. Committee Democrats have the option of delaying the vote for one week, an action that seems likely given their outspoken opposition to Kavanaugh during his recent confirmation hearing.

Following the initial weeklong delay, however, Grassley will be able to push Kavanaugh’s nomination through the committee — which holds a slight Republican majority — and to the Senate floor. Senate Majority Leader Mitch McConnell (R-Ky.) said Friday in an interview with radio host Hugh Hewitt that the full confirmation vote will take place by the end of the month.

McConnell said he has no doubts as to whether Kavanaugh would be confirmed.

“I think any doubts anybody might have had have been dispelled by his virtuoso performance before the Judiciary Committee,” McConnell told Hewitt. “I mean, it’s stunning. He’s just a stellar nomination in every respect.”

While McConnell may have praised Kavanaugh’s performance, opponents’ concerns about the judge seemed to only intensify in the wake of his Senate hearing.

Democrats have been critical of how Kavanaugh could potentially rule on issues like abortion rights, presidential power, health care and other policies. During his confirmation hearing, the nominee frequently declined to elaborate his views on key matters and referred to birth control pills as “abortion-inducing drugs.”

Kavanaugh’s evasiveness was bolstered by Republicans’ handling of certain documents from the judge’s time in the George W. Bush administration. Committee Democrats railed against the document release process, holding up the proceedings to express alarm about the number of records ultimately released, how 42,000 documents were distributed just hours before the hearing began and the fact 200,000 documents were marked “committee confidential” and blocked from public release. The Trump administration blocked more than 100,000 documents from the committee itself, citing executive privilege.

A few Democrats, most notably Sen. Cory Booker (D-N.J.), ultimately released committee confidential documents to the public, risking potential expulsion from the Senate by doing so.

“I understand the penalty comes with potential ousting from the Senate. ... I openly invite and accept the consequences of my team releasing that email right now,” Booker said Thursday.

More than 200 of Kavanaugh’s fellow Yale University alumni published a letter Sunday calling on their former classmate to make his White House records fully available before his Senate confirmation, saying declining to do so “is contrary to the best interests of the Senate and our democracy and is contrary to the ideals professed by our university.”

The contents of some of those documents resulted in another controversy surrounding Kavanaugh’s nomination: potential perjury. Democrats have highlighted how certain documents — specifically those concerning Bush’s nomination of William Pryor to the U.S. Court of Appeals for the District of Columbia and a scandal in which Republican aide Manny Miranda improperly collected and distributed Democratic files on Bush’s judicial nominees — seem to conflict with Kavanaugh’s testimony during his own circuit court confirmation in 2004. Though Kavanaugh testified he never saw any of the Democratic files, emails show he was sent some of them directly.

“A number of senators, Republicans and Democrats, asked you and you said you never received any stolen materials,” Sen. Patrick Leahy (D-Vt.) said at Thursday’s hearing. “That doesn’t appear to be accurate.”

Also under dispute is Kavanaugh’s 2004 testimony concerning his involvement in Bush-era torture programs and detention practices.

Senate Democrats have raised alarms about Kavanaugh’s apparent contradictions both during and in the wake of the recent Senate hearing; Senate Minority Leader Chuck Schumer (D-N.Y.) called the misstatements “extremely disturbing” and said they should “raise immediate red flags for all senators and the American public.”

Activists have gone one step further. Liberal organizations Demand Justice, MoveOn and NARAL Pro-Choice America sent a letter to Senate Democrats asking them to open an official perjury investigation into Kavanaugh. A separate group, Democratic Coalition, filed a criminal complaint against Kavanaugh — on which D.C. Circuit Court judge and former Supreme Court nominee Merrick Garland has been asked to rule.

Whether these controversies make a difference, however, is ultimately in senators’ hands. Republicans hold a 51-49 majority in the Senate, which means all Democrats and two swing-vote Republicans — likely Sens. Lisa Murkowski (R-Alaska) and Susan Collins (Maine) — would need to oppose Kavanaugh for his confirmation to fail.

A number of senators who were likely to oppose Kavanaugh but had yet to formally announce their positions have since come out clearly against the nominee, including Sens. Tim Kaine (D-Va.), Ben Cardin (D-Md.), Maria Cantwell (D-Wash.), Brian Schatz (D-Hawaii), Tom Udall (D-N.M.) and Jeanne Shaheen (D-N.H.).

Several key red-state Democrats are still undecided on Kavanaugh, however, including Sens. Joe Manchin of West Virginia, Joe Donnelly of Indiana and Heidi Heitkamp of North Dakota, all of whom voted to confirm Trump nominee Neil Gorsuch.

In a recent interview with Fox 59, Donnelly said he was “still reviewing” Kavanaugh’s records.

“I want to make sure we get all our homework done to make the best possible decision for the state of Indiana,” Donnelly added.

Donnelly did, however, praise Kavanaugh’s emphasis on being “impartial” during the Senate hearing.

“[It] is critical for Supreme Court justices to not be pro this side or pro that side ... but to be pro the Constitution and to realize how important precedent is,” Donnelly said.

Heitkamp and Manchin similarly offered tepid praise for Kavanaugh’s performance during the hearing, telling CNN on Wednesday they had not heard anything that would be disqualifying.

“I haven’t seen anything from that standpoint,” Manchin said. “He’s handled himself very professionally.”

Other red-state Democrats who have not yet announced a position on Kavanaugh include Sens. Claire McCaskill of Missouri and Doug Jones of Alabama, the latter of whom said in August he planned to meet with Kavanaugh after he appeared before the Senate Judiciary Committee.

Murkowski and Collins are still undecided

Even if these Democrats do get on board, defeating Kavanaugh will still require the support of Collins and Murkowski, both of whom remain undecided on Kavanaugh.

During his Senate hearing, Kavanaugh came under fire from Sen. Mazie Hirono (D-Hawaii) for his past comments on Native Hawaiians, protections for whom he opposed in a 1999 op-ed in the Wall Street Journal. Hirono pointed out those views could transfer to Alaskans as well.

For her part, Collins has so far appeared to be leaning positive on Kavanaugh’s confirmation. Despite saying before his nomination she wouldn’t vote for a nominee who’s “hostile” toward Roe v. Wade — something reproductive rights advocates believe would be the case with Kavanaugh — Collins has touted the judge’s view of Roe as “settled law,” even as a 2003 email emerged in which Kavanaugh contradicted that view and pointed out the ruling could be overturned.

The Maine senator has faced significant pressure to vote against Kavanaugh, which a survey showed 49% of her constituents want her to do. Activists have raised nearly $900,000 for Collins’ opponent in her 2020 reelection bid if she chooses to confirm Kavanaugh.

While Collins seemingly won’t be persuaded to believe Kavanaugh would be harmful to Roe v. Wade, however, she has suggested the nominee’s apparent misstatements during his Senate testimony could make a difference.

“If in fact [Kavanaugh] was not truthful, then obviously that would be a major problem for me,” Collins told the Portland Press-Herald on Friday.