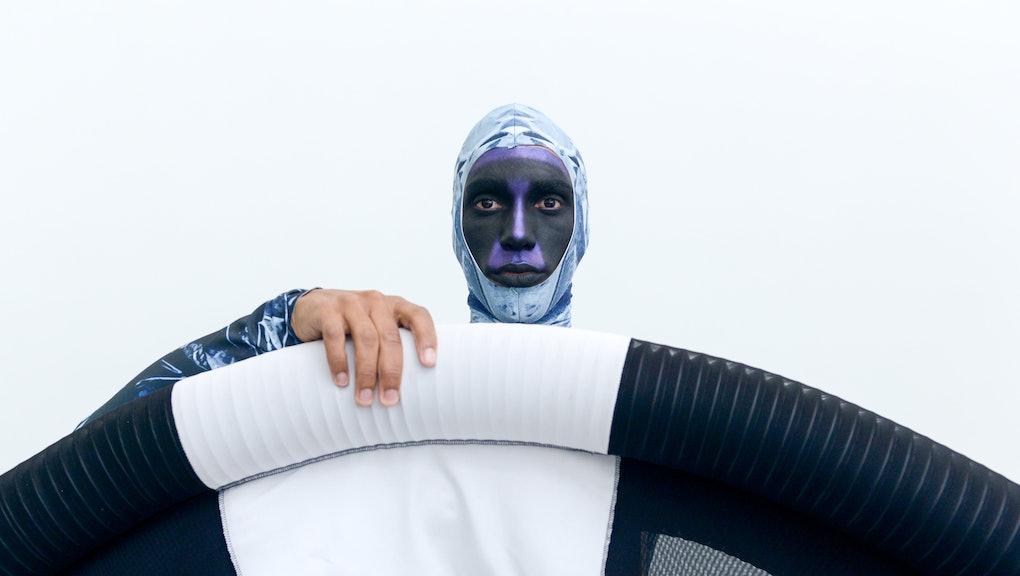 “I never had access to fashion so naturally I never thought it was a place for me, but after getting to university I had a moment where I felt like every single door was open and I just had to step in… and I stepped into fashion.”

That’s Rhode Island School of Design graduate Jamall Osterholm, a Providence-based menswear designer who just showed his second collection at New York Fashion Week as part of a partnership with LIFEWTR and the Council of Fashion Designers of America.

The collection is meant to invoke his queer black identity and, in making art about himself, cast attention on who within fashion is granted the most space to succeed.

Mic sat down with Osterholm after his presentation to chat about making the collection, creating a beauty standard that represents people like himself and using fashion to confront the idea of masculinity.

Describe your current collection and how it came about.

My current collection comes from a desire to put all of my work into context, which might not be possible but is a goal of mine. I always aim to put myself into context and understand why I do what I do. I have been making work surrounding my identity, my blackness, my gender, my feelings toward myself and my place in the world. With this collection, I am trying to recognize myself in a line of ancestry that will define a future people. An archeological dig that will reveal my truth and tell a story about how a world was created.

“With this collection, I am trying to recognize myself in a line of ancestry that will define a future people.” — Jamall Osterholm

This is now your second collection at NYFW and third overall. So let’s step back for a moment. How did your first collection come about?

My first real collection, my thesis collection, came from a realization that everything that I found beautiful was everything that I am not. It was a really big issue in my life. I felt like my eyes were open for the first time, and that’s when I truly found meaning in my art because I began making art about myself and that meant that I had to confront myself.

Growing up, did you see space for yourself [or] your type of design in the fashion industry?

Absolutely. I think I can attribute a part of my success to the fact that there is now a space being created for our voices. And I think we as people of color are the ones creating that space. I think we are coming into a time where we, on a large scale, are supporting each other and valuing each other over mainstream fashion, which for so long never considered us. I think because of this sentiment we are all being taken seriously and our voices are being listened to. Queer people of color have been creating our culture forever without being acknowledged or credited, but now we are coming into a time where we can credit ourselves and have it matter just as much as being acknowledged by the larger fashion industry.

How much do you see both your clothing and the runway as an opportunity to make statements larger than just fashion?

For me, the overall vision is so important, and by that I mean the clothing and all of the content that goes with it. The beauty of fashion, besides the clothing, is that it is very much in line with performance art. The runway itself is a kind of performance and in that performance is where I think you can really make a statement. I believe that as much as my clothes are a statement, the set, the makeup, the styling and cast are equally as important to tell a story. Representation of blackness among my cast is a huge theme for me. I constantly aim to push forward a beauty standard that reflects myself.

“I constantly aim to push forward a beauty standard that reflects myself.” — Jamall Osterholm

What are your thoughts on genderless fashion both as a concept and as a term?

I think genderless fashion is great. Not defining the work as a gender gives the space for people to interpret the clothing in a broader sense. For myself, I define my clothing menswear and I think I do this because I myself identify as a male and I am directly trying to confront the idea of masculinity. I am directly confronting the myth of masculinity [and] femininity, which at the same time has nothing to do with gender. So I label my work as menswear but for me that doesn’t mean it’s “for men.” I think the work connects with men, women and anyone who identifies as other.

“I label my work as menswear but for me that doesn’t mean it’s “for men.” I think the work connects with men, women and anyone who identifies as other.” — Jamall Osterholm

Where do you want to see your career go next?

I want to continue creating more collections. I think leading up to now I have been making my art. And when I say that, I mean I have been less concerned about my fashion as a product and more with the message behind my brand. As I continue, I want to begin building my business, which means considering a market that can actually purchase Jamall Osterholm clothing. One thing that is important to me moving forward is that I continue making art. I never want the business side of my brand to consume the real reason why I do fashion.

Inclusivity became a hot-button topic over the last few years. Do you think the industry is doing enough to make these concerns more legitimate than a buzzy topic?

Inclusivity is kind of a funny word to me because it presumes that POC haven’t been the driving force of art [and] design and culture this whole time. The idea that we are now being “included” is a farce. I think we are now being credited. Whether or not fashion is taking it seriously, whether or not it is a “buzz topic,” we are taking ourselves seriously and I think that’s all that matters. And because we can finally do that, we are setting up a path for future generations to do the same. So in my opinion POC designers are only going to continue flourishing and creating the world that we want to see.