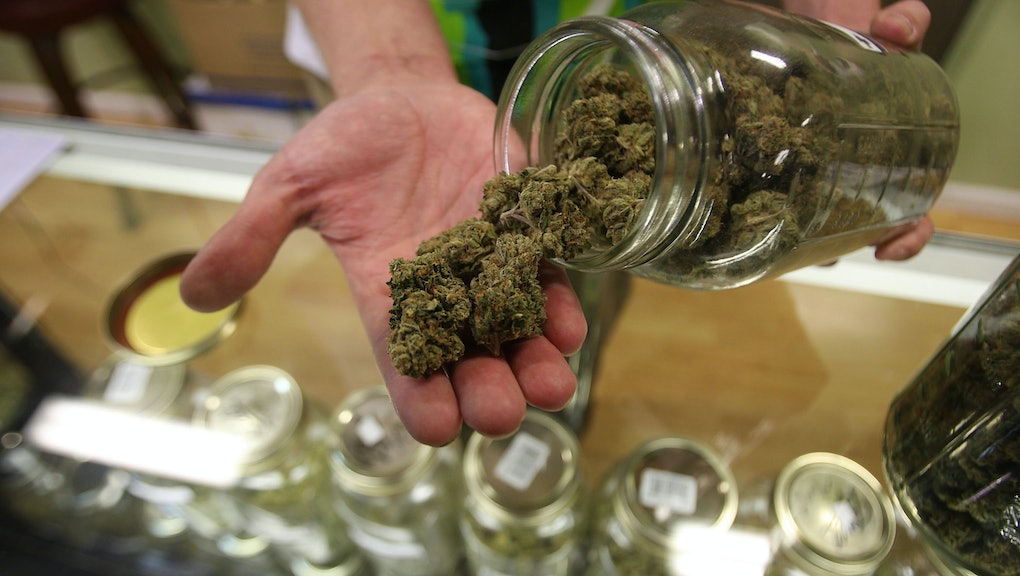 From granola to breakfast cereals, reports have detected pesticides in a number of American foods. And, according to a new study by California’s Bureau of Cannabis Control, these chemicals are making their way into weed edibles.

On Tuesday, the Associated Press reported levels of pesticides, mold and bacteria, like E. coli and salmonella, were discovered in tested batches of marijuana products — and nearly 20% of the samples failed to pass recently introduced purity and potency checks in California.

In January, cannabis enthusiasts rejoiced when California legalized recreational marijuana. Crowds lined up at dispensaries, spending an estimated $339 million in just two months of its legalization. In July, checks of marijuana products were mandated statewide, requiring that all marijuana products meet regulatory requirements (like accurate labeling), or otherwise be destroyed.

Since conducting almost 11,000 tests, the Bureau of Cannabis Control (a real, government-run organization, that regulates cannabis licenses in California) found 1,904 of the samples failed to meet the state’s requirements — effectively blocking one-third of cannabis-infused cookies, candies and tinctures from being sold at stores.

Certain cannabis supporters aren’t happy about the mandate, arguing that labeling regulations are too strict. One rule requires that marijuana products fall within 10% of THC concentrations (the chemical responsible for the high) as advertised on a product’s label. Some products miss that number by a narrow margin and end up failing tests. And according to the report by the Bureau of Cannabis Control obtained by Mic, claims on labels made up 67% of the failed tests.

The tests themselves may be inaccurate

Not all lab tests are necessarily accurate, Erik Hultstrom, founder and grower of cannabis brand Legacy Strains, said by phone, adding that quality standards should be required across laboratories.

“A lot of [labs] will do multiple tests and get different THC numbers with the same batch,” he said. “I’ve had false positives where I’ve submitted samples that tested positive for chemicals that I’ve never used and never had on site.” Hulstrom said he thinks the lab failed to appropriately clean surfaces between testing his sample and another.

Is it so bad to ingest weed with pesticides?

Of the nearly 11,000 marijuana samples taken, 114 were rejected for containing bacteria and mold, while 403 samples failed for containing unacceptable levels of pesticides. But how bad is it to ingest an edible contaminated with pesticides or mold? It depends, Jeffrey Raber, founder of the Werc Shop, a cannabis testing lab, said over the phone. “When you have immunocompromised individuals or others who are sick, taking this as medicine is something you’d need to err on the side of caution of,” he said. Pesticide exposure is linked with cancer, though there’s not enough research on exposure specifically through cannabis.

And many of us already consume a number of foods with pesticides, though there are still debates about how much is safe to consume. Glyphosate, the most widely used herbicide that was recently discovered in a number of oat products, is classified as a “probable carcinogen” by the World Health Organization. Still, according to the Environmental Protection Agency’s website, it’s not considered to be incredibly toxic when ingested by humans.

Raber says studies of inhalation of pesticides (like smoking a joint) and their effects on consumers are also understudied. “It’s a large unknown and unfortunately, we really don’t know that much since most studies are done on food [ingestion].”

And there aren’t many studies following ingestion and inhalation of mold in marijuana products either. In the short term, exposure to mold (like being in a home with a mold problem) has been known to cause conditions like nasal and sinus congestion. Long term exposure to mold, however, has been shown to result in cancer and may even affect the brain.

Many marijuana products are still underregulated by the Food and Drug Administration, with much of its scientific research extending to its medical purposes, not recreational use. But with more and more states on the precipice of legalizing cannabis, the FDA is beginning to recognize the significance of its use, having approved its first cannabis-related drug in June, for use by those with epilepsy.

And Hultstrom said a failure rate of 20% for marijuana batches in California is an encouraging sign for the cannabis industry as a whole and that consumers should look to licensed, regulated shops over illegal ones to ensure the quality of cannabis products.

“In another two years, we’ll be looking at a failure rate under 5%,” he said. “And moving forward, it will only improve — and growers who cut corners before will just have to catch up.”