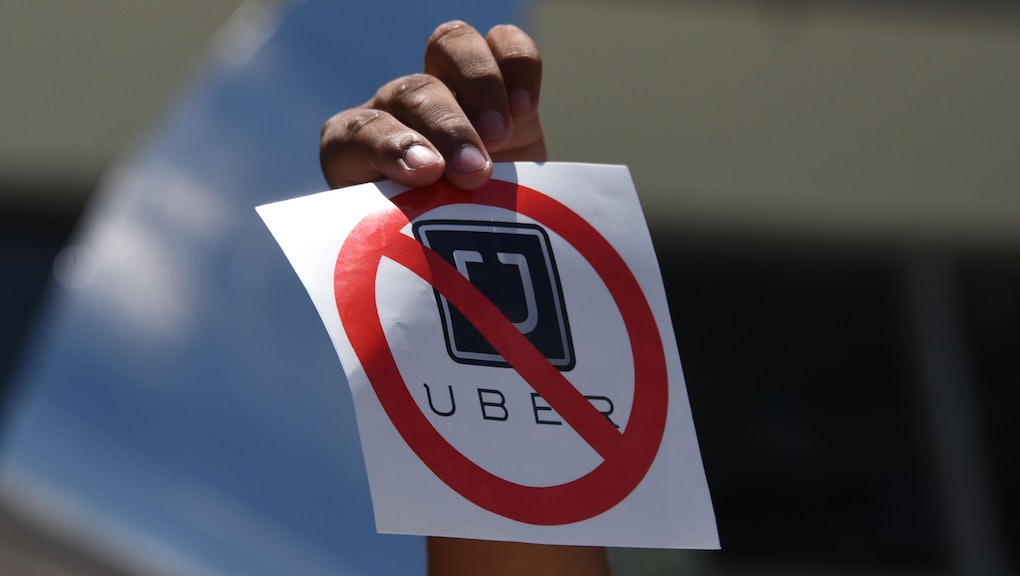 Money Confession: I spend $500 a month on Uber, Lyft and taxis

In this ongoing series, Mic readers submit their money confessions — and we’ll ask experts how to help solve these difficult financial issues. Send your own anonymous confession to moneyconfession@mic.com to get advice on your situation here.

“I spend over $500 a month because I’m addicted to taxis, Uber and Lyft. I’ve always been a cab person. I’m also a creature of habit, so when I get used to something, even if it’s not cost-effective, I keep doing it. At my last job, I started taking a taxi to work and never figured out the subway routine of getting there, so it stuck... for a year and a half. I was making good money and honestly didn’t really notice it adding up, until I saw that monthly total in my Mint app and wanted to vomit. Now I am on a serious budget and am getting much better about public transportation!”

The business world is obsessed with “disrupters,” companies that disrupt entire industries and change the way we live. One of the greatest disrupters of the last decade has got to be the ride-sharing app Uber, and the competitors that have sprung up since its launch seven years ago, like Lyft, Via, Juno, Curb, Mytaxi, Grab, Ola and so many more. Uber is available in 80 countries and hundreds of cities worldwide, is valued at $72 billion and has reached such cultural ubiquity that the company name has reached verb status: “I’ll Uber over to your house.”

So no, it’s not surprising that a person might become addicted to the ease of Uber.

The problem with spending money online and on your phone is that magical disconnection between what you’re getting — a ride! an order of pad thai! a new pair of jeans! — and the actual dollar bills being deducted from your account. “Apps don’t allow the exchange of money. There’s something important about having money in our hands,” Sherrie Campbell, Ph.D., author of Success Equations: A Path to Living an Emotionally Wealthy Life, said in a phone interview. “When you give something away, you note the subtraction. With apps, it’s all addition, like I just pushed a button and here it is!”

That disconnect is particularly seductive with apps like Uber. “As opposed to a cab where you would pay with cash or actually run your credit card and realize you spent $20 on it, with ride shares it’s like, ‘Here’s my ride! Hi, bye!’” Campbell said. “You don’t even send the money to them. It feels like it’s almost free.”

Ride-sharing apps are new, but this money confessor is dealing with that most classic financial mistake: denial. Kelly Lannan, a director of young investors at Fidelity Investments, commended our confessor for using Mint. “I think you took an excellent first step by taking a look at your expenses on Mint! We often find that avoidance is a very common action by the majority of people when it comes to their finances,” she said in an email interview. “They refuse to look at their credit score. They don’t check their bank statements. Once you take this step and face your spending habits, you are much more likely to take action — because you have already faced the hardest part.” Mint is one budgeting app that tracks your spending; check out even more here.

What should you do if you’re addicted to Uber?

The first step any Uber devotee can try takes two seconds. “Delete the app! If you think that this is something that may be causing you to turn to ride-sharing more, then practice ‘out of sight, out of mind,’” Lannan said. “I cannot tell you how often I have deleted Grubhub from my phone in an attempt to cut out delivery from my life.”

As you get reacquainted with public transportation, “there are numerous things you can do to still take your beloved ride-sharing apps and still save money,” Lannan said. So many apps, including Uber, allow a carpool option where a driver will pick up other riders along your route. “Share a ride to the office with a co-worker or split the Lyft fare with a friend,” she said. “You often have to share the ride with another person, but the rates are discounted and you are still able to take advantage of the service.”

Or try shifting your thinking by treating Uber as a splurge. “Commit to only using the ride-sharing app on Fridays. That way you start the weekend on a high note, and this is something you can look forward to during the week,” Lannan said. “By taking public transportation the remainder of the week, you are saving enough to justify splurging a bit.”

Do you have a horrible money habit keeping you awake at night? Are you struggling to figure out what it means, and how to solve it? Send your situation to moneyconfession@mic.com (we can keep your identity anonymous!) and we can work it out in a future column of Money Confessions.