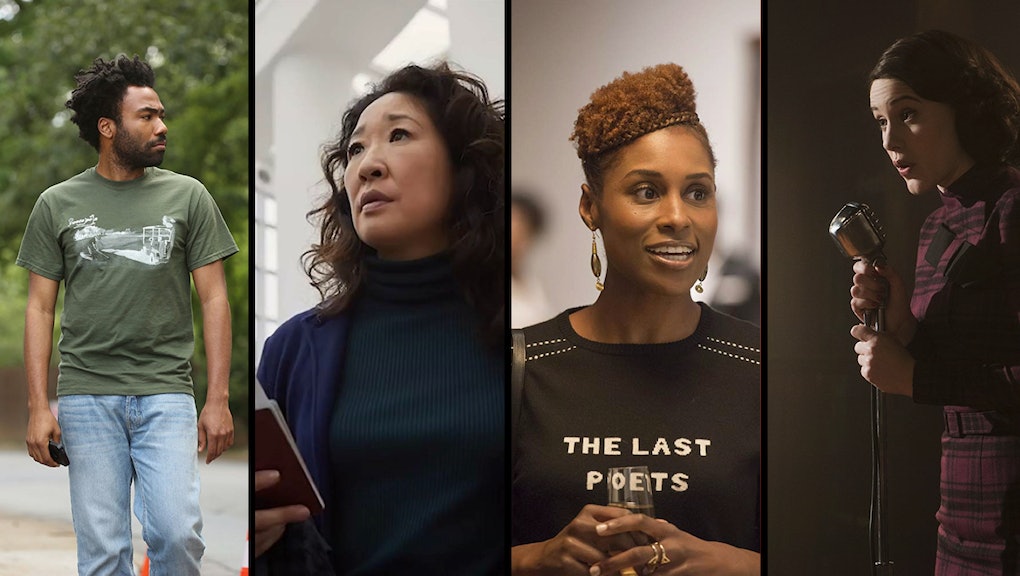 Emmys 2018: ‘The Marvelous Mrs. Maisel,’ Sandra Oh and other nominees we’re rooting for

It’s that time of year again: The Emmys are here to celebrate excellence in television. In anticipation of Monday’s ceremony, which will be hosted by Saturday Night Live duo Colin Jost and Michael Che at the Microsoft Theater in Los Angeles, some of Mic’s editorial staff decided to highlight a few of the nominees we’re hoping win big. Below is a list of the shows and performers we’re rooting for and why they deserve to take home the statuette.

One quick note: We doubled up on recommendations in categories where we’re fond of more than one nominee. And with that, let’s get to who we feel the Emmys should go to.

Atlanta: Robbin’ Season might be the best horror show of the year. There was the gothic chamber piece “Teddy Perkins,” with its musings on fame and abuse, set in a cobwebbed mansion haunted by a demented Michael Jackson-esque figure. Then we had the hallucinatory “Woods” episode, which played like a bad high beamed right onto our viewing devices. And don’t forget “Alligator Man,” the season opener that articulated the thing Donald Glover’s Earn is most afraid of — that he’s going to become a bystander to his own life. Wait, what’s that? Oh, this is for the comedy category? Well, whatever — give this show all of the awards regardless of category. Nothing else on TV shape-shifts so seamlessly, dipping between genres and formats, redefining before our very eyes what it means to be a comedy. — Kyle McGovern

Honestly, the first season of Amazon’s The Marvelous Mrs. Maisel — created by Amy Sherman-Palladino, best known for the endlessly quippy Gilmore Girls — didn’t start off on the best foot for me. The season premiere felt a little sluggish, a little too prestige-y and a little too focused on the romantic drama between Rachel Brosnahan’s titular Midge Maisel and Michael Zegen’s caddish Joel Maisel. The episode’s final act, though, hit me like the spotlight at the legendary Gaslight Café. Those sweet, sweet, 10 minutes see Midge, fueled with wine and rage, take the Gaslight stage and unload on the crowd about how her life has suddenly imploded. That sequence, when Midge realizes she has a natural knack for comedy, was so joyous and infectious I simply had to keep watching. That’s the mark of any good performer: They leave you wanting more. And, like Midge, Sherman-Palladino knows that. — Tim Mulkerin

Outstanding lead actress in a comedy

It’s about time Issa Rae was nominated for her starring role in her hit HBO comedy series Insecure. (I’m still holding a slight grudge against the Emmys for snubbing her in 2017. Aside from Tituss Burgess, there’s nothing about Unbreakable Kimmy Schmidt that’s worth honoring anymore.) In the season two premiere — which is the episode Rae submitted for the Emmy race — we pick up with her character, Issa Dee, as she navigates the fallout from a relationship gone awry. Rae always turns in great performances, but anyone who’s been paying attention to the half-hour series knows she should really win for season two’s sixth episode, “Hella Blows.” That installment’s blow-job scene — and, um, Issa’s subsequent eye injury — not only blew up the internet but also made me literally spit my wine across the room. No lie: I’m still laughing about it right now. — Erin Evans

No one has more fun than Tracee Ellis Ross. When she’s not appearing in Drake videos or dissecting popular rap songs, Ross plays the role of Black-ish’s Rainbow Johnson, the lovable goofball mother of five who refuses to let anyone forget she’s also a doctor. Ross’ charm and acting chops are essential to Black-ish’s appeal: Her comedic moments are gut-busting, her dramatic moments heart-wrenching. Season four had no shortage of the latter with its ongoing divorce storyline between Rainbow and Anthony Anderson’s Dre. Luckily, those heavier moments don’t outweigh the fun — Rainbow knows when to channel her inner Tracee. — Xavier Harding

Outstanding lead actor in a comedy

A few years removed from his hall-of-fame stint on Saturday Night Live, Bill Hader has reinvented himself as an actor-slash-auteur. Barry — the HBO series he co-created with Alec Berg — allows Hader to make use of his many writing and directing talents, but the real revelation is his starring performance as part-time hitman and full-time struggling actor Barry Berkman. Throughout the show’s eight-episode first season, Hader displays a startling level of depth, building a character that lets him explore guilt, trauma, violence, toxic masculinity and the pressures of hitting your marks at acting class. The episode Hader submitted for consideration isn’t exactly packed with laughs, but it’s an affecting snapshot of the teary-eyed assassin doing what he (unfortunately) does best. — Kyle McGovern

Showrunners Matt and Ross Duffer turned the eeriness up to new levels for Stranger Things’ second season. All the relief we felt after seeing Noah Schnapp’s Will Byers reunited with his family at the end of the first season? Yeah, that was dampened pretty quickly, what with that giant Shadow Monster exploiting Will’s connection to the Upside Down and taking control of the poor kid’s body and mind. But Will isn’t the only character season two explores in darker detail. We also get a (mostly regrettable) side story for Millie Bobby Brown’s Eleven in which she comes face-to-face with her traumatic past and strengthens her psychic powers so she can pull off a feat of blockbuster-type heroism in the finale. Stranger Things took a tactic that’s way too rare for sequels: It simultaneously went bigger and deeper, and that’s why it deserves top honors at the Emmys. — Natelegé Whaley

Outstanding lead actress in a drama

In addition to the fact it’s high time for an Asian actor to win an Emmy in the outstanding drama actress category, Sandra Oh’s standout performance in BBC America’s Killing Eve should definitely earn her the prize. Oh, who had reportedly been holding out for a worthy part before joining the hourlong drama, delivered a nuanced and complex performance as Eve Polastri, an MI5 paper-pusher who becomes obsessed with tracking down a female assassin. Over the course of the first season, said assassin becomes obsessed with her right back. Come for the witty banter, stay for the chemistry between Oh and costar Jodie Comer. — Anna Swartz

Outstanding lead actor in a drama

Sterling K. Brown (This Is Us)

When it came time to submit an episode in hopes of a repeat win in the outstanding lead drama actor category, Sterling K. Brown picked “Number Three,” and it’s easy to see why. It’s the episode where Brown’s Randall Pearson and his wife, Beth (played by Susan Kelechi Watson), are faced with the prospect of parting with their foster daughter, Lyric Ross’ Déjà. The father of two initially fights for Déjà to stay, believing she’d be safer with them than her biological mother. But Randall, an adopted child, has a change of heart after reflecting on the void he feels from missing out on a relationship with his now-deceased biological father, William. The plot might sound simple or straightforward, but the bittersweet emotions Brown works through are anything but. — Natelegé Whaley

Outstanding lead actor in a limited series or movie

Does Jesse Plemons really deserve the Emmy for outstanding lead actor in a limited series or movie for a one-episode turn on Black Mirror? Yes, he does. “USS Callister” is the rare Black Mirror episode with something more to say beyond “humans use technology to serve our worst impulses.” Plemons’ performance as a resentful, toxic “nice guy” who acts out his fantasies of control and abuse on fictional women made him the sharpest villain on TV in recent memory. — Anna Swartz