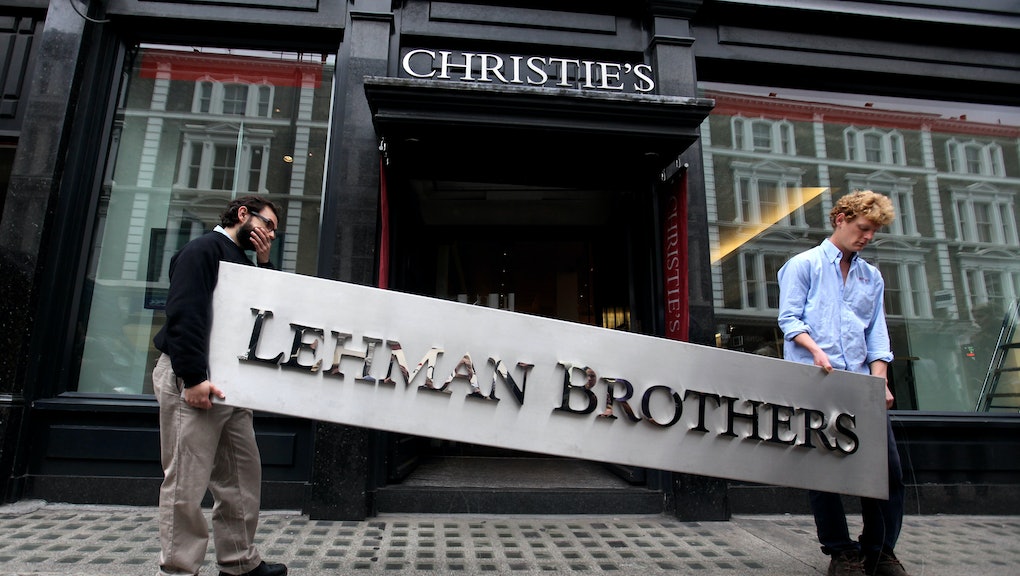 There were so many cracks in the foundation of the American economy in the months and even years leading into the recession — a million little choices that led to a global economic crash.

But the house fell down entirely on Sept. 15, 2008, when the global firm Lehman Brothers filed for bankruptcy. It was the turning point at which the crash became real, even for those who weren’t glued to the stock market all day. Unlike when the government and JP Morgan bailed out Bear Stearns in March 2008, or when Bank of America agreed to purchase Merrill Lynch, no one came to save Lehman. The economy was in free fall.

It’s been 10 years since that fateful filing, and 65% of those who said they were affected by the recession say they haven’t fully recovered from the crisis, according to Betterment’s Consumer Financial Perspectives Report. How did it feel to be inside the company when it happened? We spoke with four Lehman alumni (who requested anonymity to speak freely about their former employer after all this time) who got real about those terrible final hours.

The intern with a job offer in hand

I spent the summer of 2008, the summer after my junior year of college, at Lehman Brothers, where I was in the analyst class of the Boston office. On Aug. 7, 2008, I was the only one in Boston to get a job offer for when I graduated and it was such a proud moment for me. Going into my senior year, I was all set. Then, suddenly, I wasn’t.

I don’t recall them contacting me. I do remember my college classmates panicking — one friend who also had an offer from Lehman was reading the papers every day as the stock price fell and kept trying to call them to check on her job. When they filed for bankruptcy, I learned it from a newspaper. I started applying to a million different places, in full frantic mode. People made jokes when they heard I’d interned there: “Oh, are you the reason it went bankrupt?”

In October, my friend and I both got calls from Barclays saying they’d bought up several of Lehman’s offices and they were extending us the same offer that Lehman had given us. We were ecstatic, like “We’re safe! We have Barclays!” A classmate, who was all about the morals, said, “What’s wrong with you? People are losing their jobs and all you can think about is yourselves.”

“‘What’s wrong with you? People are losing their jobs and all you can think about is yourselves.”’

The role Lehman had offered me was in Boston, but that office was gone now and if I wanted to keep the Barclays job, I had to move to New York. There were a lot of culture clashes between the Lehman people and Barclays people, who were much more stern. Maybe because the company is British? If we had a meeting at 10 a.m., the Barclays staffers would be seated at 9:50 a.m. and the Lehman people would come in at 10. We were a bit more approachable. I stayed there for three more years.

I no longer work in the finance industry, and part of that is because I started to really believe the people in it were evil. It wasn’t the crash that convinced me, but Occupy Wall Street. I remember listening to colleagues mocking the people protesting outside, with this true sense that they were better than them, and it made me so angry. How can you be so snobbish? Especially after everything that happened.

The analyst who started days before

Lehman Brothers came to recruit at my college the spring of 2008, my senior year. I had interned previously with Bear Stearns and felt like, “Phew, dodged a bullet there!” I joined the desk at Lehman on the Tuesday after Labor Day 2008, and I was so proud to be working at such a prestigious company. To walk into that beautiful, dramatic lobby every morning: It was really exciting.

On our first day, Tuesday, Sept. 2, 2008, I remember my manager telling my class that we were arriving at such an exciting time in Lehman’s history. On Wednesday, CEO Dick Fuld had a call with investors and we all listened in as he basically explained that the company was in crisis and here was the plan for how we’d get out of it. As he talked, we just watched the stock price drop.

There were rumblings between the analysts like, “Oh we’re going to be sold, like Bear.” The following Friday afternoon, the Fed announced they wouldn’t support a deal. That was the “oh shit.” We heard Barclays and Bank of America were considering buying us, but then BoA bought Merrill Lynch. Over the weekend of the 14th and 15th, people were going into the office and getting their stuff out, but I had no stuff. Then I got texts from other analysts that the building was in lockdown. We got the email at midnight on Sunday night: Lehman had filed for bankruptcy.

“The coffee truck outside put up a sign: ‘No coffee for anyone reporting on Lehman.’”

One night, my roommate texted me by mistake a message meant for her boyfriend: “I think [redacted] is going to lose her job.” Like gee, thanks! But I didn’t. I was actually lucky to be brand new: Barclays bought up my analyst class. I was never out of a job. I stayed for six years.

It was so frustrating, but I did feel a stigma about working in finance. From my experience, banks consist of a lot of nice people who are just trying to do their jobs. We’re not back here rigging the rates and causing companies to be badly managed. Even among friends I felt the conception that banks were just bad organizations, doing bad things.

The new hire forced to repay his signing bonus

My previous employer had paid for me to go to business school, as long as I worked for them after. I interned for Lehman in London and they gave me another offer and I was on the fence for a while but they convinced me: The position came with a £40,000 signing bonus, or about $74,000 (around $87,000 today). My old company was disappointed in me, but I used that money and all my personal savings to pay them back for my tuition.

I’m Russian, and I was offered a role in that London office. I had to go home to Moscow to wait for my British work permit to go through — I was scheduled to start in mid-September. I found out about the bankruptcy one morning out from the British embassy. A staffer called me and said, “We have your application in front of us but we’re watching the television and… are you sure you still have a job?” I called New York and reached an outside consultant, not Lehman HR. They told me I was sacked, and a few weeks later it got worse: I received an official letter saying I had to pay back the bonus.

“They told me I was sacked, and a few weeks later it got worse: I received an official letter saying I had to pay back the bonus.”

Of course, my old firm wouldn’t take me back. I consulted a lawyer, and the contract said that if I wasn’t still working for Lehman by the end of my first year, I had to pay back the bonus. I argued that I wasn’t working for Lehman because Lehman literally didn’t exist, but it didn’t matter. I was financially ruined.

In 2008, I was sought after as a Russian speaker because the Russian market was hot. Now, no one wanted me. The British office of Lehman was bought by Nomura so all my fellow analysts got jobs, but Nomura didn’t want to sponsor my work permit. I struggled for months to find work. I’m still in Russia. I work in mergers and acquisitions.

The finance outsider just trying to figure it out

In 2007, so many financial institutions were recruiting college students who were, like, English majors. They wanted people who weren’t the typical business school types. I double majored in communications and psychology ... and I thought I’d go into marketing or PR. I went to the networking event on campus because it had free food, and the woman from Lehman Brothers liked my resume. I got offers from Lehman and Goldman Sachs in October 2007 of my senior year, and I chose Lehman because I thought I’d have more opportunities there. I knew nothing about finance.

I was intrigued by my job in the operations department because I’m fascinated by figuring out how things fit together. I liked being in the pit crew, not a race car driver. I figured I’d stick around for three years, and learn a ton about the financial markets. I was so proud of my little Lehman hat. I started in June 2008.

When I think back to that summer, I absolutely knew something was up. The head of global operations came to speak with us and kept saying, “Everything is going absolutely fine.” As a communications person, I was hyperaware: Why would he need to say that?

My group was isolated from a lot of talk. For someone like me, who wasn’t as aware of the markets yet, I was like, I don’t know. We’ll figure it out! I’m an optimist. I didn’t think it would actually, really fold.

“I’m an optimist. I didn’t think it would actually, really fold.”

After the news hit, I remember everyone taking their Lehman-labeled things. I still have some old envelopes with the name on them. Everyone was watching It’s Always Sunny in Philadelphia on their computers. Unlike Gchat and some other sites, which were banned from our work computers, Hulu was brand new and that was one of the shows on it. The bars around 745 [Seventh Ave., Lehman’s headquarters] were booming. Those bars have never made more money.

I think it’s gone now, but on my old Blackberry I took a photo of the guy chipping down the Lehman sign. I was sad for my boss, who had been there for 20 years with all of her stocks there. Thankfully, I was absorbed by Barclays. My group just kept their heads down and continued working. No one held anyone else’s hand through it.

I left a few years ago, and now I work in marketing and advertising. For Halloween 2010, I wore my Lehman hat and went as “bankrupt.”