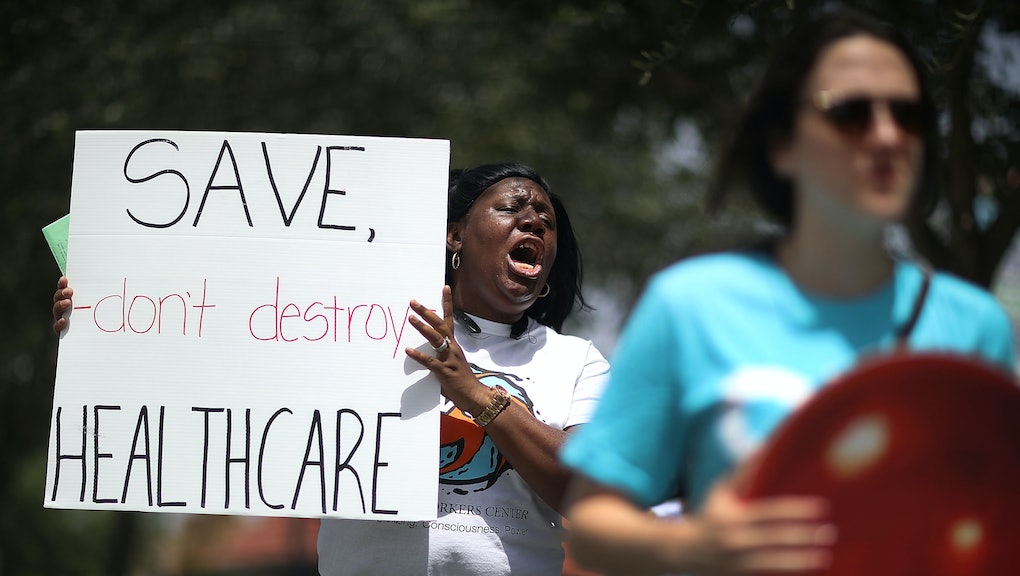 Maryland entered the battle of states fighting over the Affordable Care Act’s future, filing a lawsuit Thursday against the Trump administration over their repeated attacks on the health care program.

“Since taking office, the Trump administration has engaged in a sustained effort to ‘explode’ the Affordable Care Act by making it more difficult and expensive for individuals to procure health insurance through the Act’s Exchanges,” the lawsuit notes.

The suit asks the court to uphold the ACA by issuing a declaratory judgement that asserts the ACA is “constitutional and enforceable,” as well as an injunctive relief that keeps the Trump administration “from taking any action inconsistent with the court’s declaration.”

If the ACA is dismantled, the lawsuit states, its cancellation would “cause immediate and long-term harm to Maryland.” Around 100,000 Maryland residents have obtained private insurance and more than 1 million are on Medicaid under the ACA, the lawsuit notes, while uncompensated care costs in the state have declined by $300 million.

“We cannot allow President Trump and Attorney General Sessions to destroy the ACA,” Frosh said in a statement. “Their attempts to sabotage this life-saving law and jeopardize the health of Marylanders who rely on it cannot stand. We are taking action to protect and ensure health care coverage for every Marylander and all Americans.”

The Maryland lawsuit is the latest state effort regarding the ACA’s future, as state attorneys general across the country have fought both for and against the health care program. Sixteen Republican-led states and two Republican governors, led by Texas Attorney General Ken Paxton, filed suit against the ACA in February, arguing that since Congress eliminated the tax penalty for individuals who don’t purchase insurance, the ACA is now unconstitutional and should be struck down.

Attorneys general in 17 Democratic-led states, led by California Attorney General Xavier Becerra, are defending the ACA in the Texas suit, which was heard in district court earlier in September. Though the Trump administration is the named defendant in the Texas lawsuit, the administration said it would not defend the law in court, instead filing a brief in support of the Texas challenge agreeing the law should be struck down.

In its brief, the administration pushed for a preliminary injunction that would strike down several ACA provisions, including the protections for pre-existing conditions, arguing that the protections cannot be separated from the individual mandate that Congress eliminated.

Maryland, which is not part of the challenge to the Texas lawsuit, argued against the Republican states and Trump administration’s reasoning for challenging the ACA in its lawsuit, saying there is “no basis” the targeted provisions “should be held unconstitutional because they cannot be severed” from the individual mandate protection. The Maryland suit also noted the Trump administration’s mere decision not to defend the law “threatens the continued viability of some of its major provisions” and “presents an imminent risk” that the administration will not enforce the ACA’s provisions.

While the Texas lawsuit already appeared to be bound for the Supreme Court — something lawmakers noted during the recent Senate hearing for Supreme Court nominee Brett Kavanaugh — the Maryland lawsuit may complicate matters even further, as it could potentially lead to two conflicting rulings on the ACA’s legality.

“Depending on how quickly the Maryland case moves, it’s possible we could see dueling injunctions — one ordering the Trump administration to stop enforcing the law, the other ordering it to keep enforcing,” University of Michigan law professor Nicholas Bagley wrote in a blog post. “That’s an unholy mess just waiting to happen.”