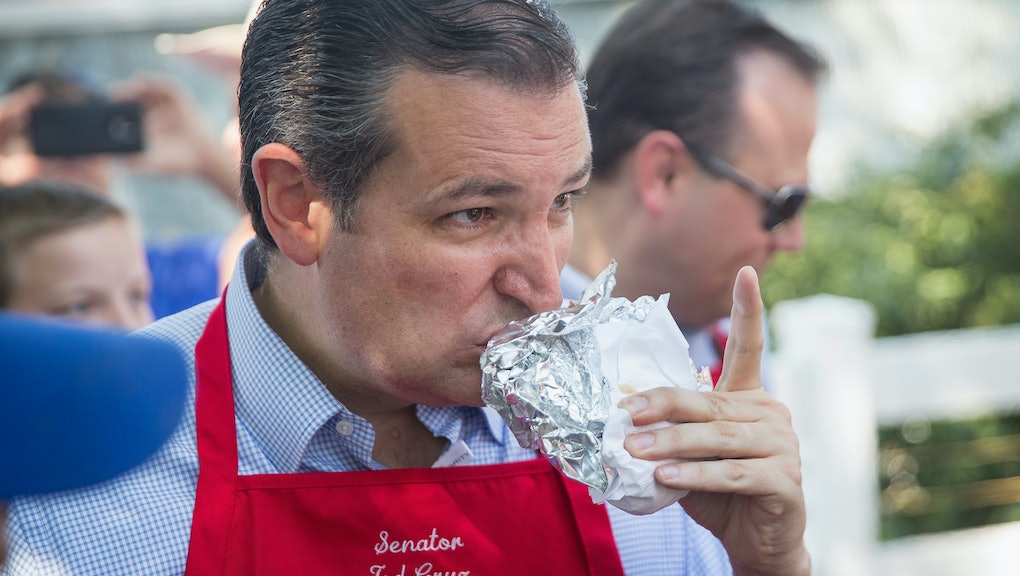 At a campaign event Saturday held at a restaurant in Columbus, Texas, Republican Sen. Ted Cruz used a familiar tactic in an effort to engage voters. “If Texas elects a Democrat, they’re going to ban barbecue across the state of Texas,” Cruz told a room of supporters, the Austin American-Statesman reported.

It’s not the first time Cruz has tried to mobilize American voters through their stomachs. Cruz has repeatedly attempted to capitalize off of Americans’ connection to food, and manipulate it into something that could be threatened if he were to lose an election.

When running for president in 2016, Cruz played off a trope that was sweeping the nation by remarking on the political correctness of providing for special diets. At the time, the gluten-free fad had arguably hit its peak: Between 2009 and 2014, the number of people who adhered to a gluten-free diet increased three-fold, while the number of people affected by celiac disease, an autoimmune disorder in which gluten consumption can lead to uncomfortable to life-threatening conditions, remained the same. Liberals, he inferred, wanted to obliterate gluten and forever ruin the fluffy, perfectly textured and comforting divinity that is bread.

At the time, Cruz vowed that, if elected president, he would not offer gluten-free meals to the military. It was a warped sort of logic: While aboard South Carolina’s USS Yorktown, Cruz said that he’d wipe out cases of “political correctness” in order to spend money to build a more robust military.

“That’s why the last thing any commander should need to worry about is the grades he is getting from some plush-bottomed Pentagon bureaucrat for political correctness or social experiments — or providing gluten-free MREs,” Cruz said, referring to ready-to-eat meals.

Sure, it was probably dumb that certain people felt impelled to cut gluten from their life and waste money and chewing energy on no-good gluten-free cereals, bread and other trendy products. But, in a country that claims to thrive off capitalism, it is consumers’ right to do so. Even more of a right, for military workers especially, is access to food that won’t threaten one’s livelihood.

The time he promised french fries to all kids

Also during his 2016 presidential run, Cruz promised that French fries would return as a lunchtime staple. At a rally in Des Moines, Iowa, Cruz addressed the people in the room who didn’t yet have the right to vote. “Let me say something to the school-aged kids here,” he said. “If Heidi Cruz becomes the next first lady, French fries are coming back to the cafeteria.” He added, “Maybe it’s just me, but I kind of think cardboard belongs in the trays, and not in the meals.”

Cruz might as well have pledged extra recess and no homework for all. His words were a dig at former first lady Michelle Obama’s work in school nutrition and battling childhood obesity, which, by the way, is a growing epidemic in the United States. French fries are indeed a part of America’s cultural identity. So with a swift, empty promise, Cruz positioned this delicious, integral American dish as at risk, and could only be restored with him in the White House.

Food doesn’t have to be politicized or divisive in the way Cruz decides to make it. It is often a common denominator and a way to bring people together. The late Anthony Bourdain used food to understand those whose perspectives were different from his own. He helped his viewers to empathize with people they would have otherwise never sat with at at the table. One of the beauties of food is that two people from very different perspectives — a Republican and a Democrat, even — can wholeheartedly enjoy the very same meal.

Red or blue, Texans see barbecue as part of the state’s culinary identity — something that won’t change depending on which party leads the state. “Texas-style barbecue might be the most popular cuisine in America right now,” Patrick Feges, co-owner of Feges BBQ in Houston, said in an email. “It’s like banning pizza in New York or cheese in Wisconsin. It ain’t happening. Besides, what does Ted Cruz know about barbecue anyway? He’s from Canada.”