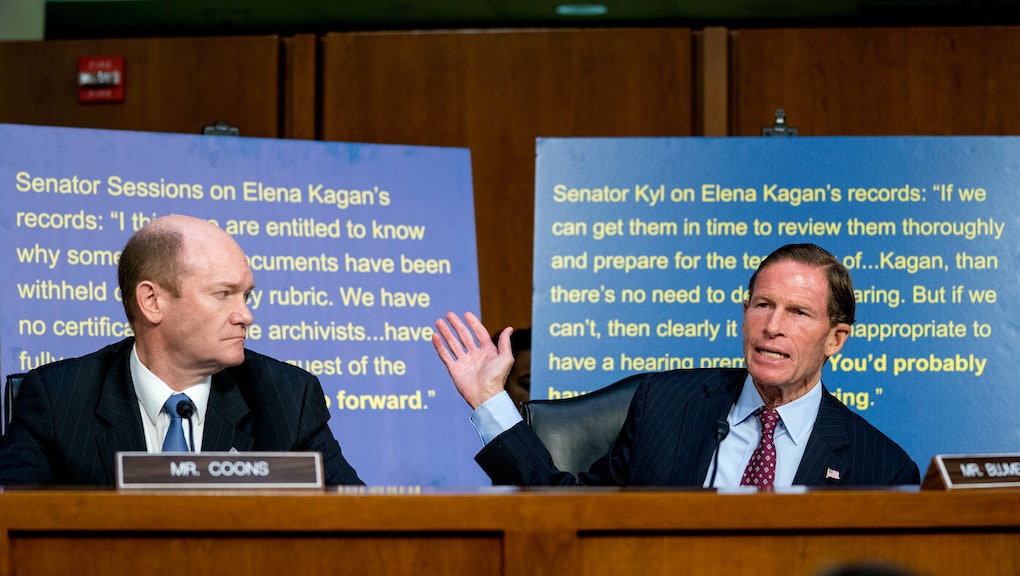 As Supreme Court nominee Brett Kavanaugh’s confirmation is rattled by sexual misconduct allegations, Senate Democrats are continuing their push to learn more about the judge’s record during the George W. Bush administration.

Six Democratic members of the Senate Judiciary Committee, led by Connecticut Sen. Richard Blumenthal, filed a lawsuit against the National Archives and the CIA on Monday. The suit asks the agencies to release all their records from Kavanaugh’s time as Bush’s associate counsel and staff secretary.

The lawsuit concerns a Freedom of Information Act request filed in August by Senate Democrats for Kavanaugh’s documents that has yet to be fulfilled. Senators are asking the courts to compel the agencies to comply with the request, and the lawsuit includes a motion seeking a preliminary injunction, as well as a temporary restraining order to force the agencies to immediately respond.

“The Trump administration and Senate Republicans’ refusal to do their job — blocking us from doing ours — has forced us to turn to the courts,” Blumenthal said in a statement. “Reviewing the full record of a nominee for a lifetime appointment to the highest court in the land isn’t optional — it’s obligatory.

“Senate Republicans’ shameful abdication of their constitutional responsibility to vet this nominee now requires us to seek judicial intervention to obtain his record. There is too much at stake to accept anything less than a complete picture of Judge Kavanaugh’s background.”

Monday’s lawsuit is the latest act of defiance by Senate Democrats over the withholding of the vast majority of Kavanaugh’s documents from the Bush administration.

The National Archives reported there are millions of pages of documents concerning Kavanaugh’s time in the Bush administration. According to the Washington Post, however, only 415,000 pages had been released to senators by the end of August before Kavanaugh’s Senate hearing began, with an additional 42,000 pages released just hours before the hearing began. The documents were primarily released through Bush lawyer Bill Burck, rather than the National Archives, and tens of thousands of pages were withheld from the Senate by the Trump administration, which invoked executive privilege.

In addition to their frustration over the small percentage of documents released and Burck’s involvement, Senate Democrats also railed against the decision to label 147,000 of the documents “committee confidential,” which meant they could not be publicly shared. Democratic members of the Senate Judiciary Committee held up Kavanaugh’s Senate hearing by speaking out against the withheld documents; several senators, most notably Booker, then released committee confidential documents, potentially risking expulsion from the Senate to do so.

The Democrats’ legal request for the Kavanaugh documents comes as the nominee’s confirmation has been delayed by professor Christine Blasey Ford’s allegation that Kavanaugh forced himself on her at a high school party in an act of “attempted rape.” A judiciary committee vote on Kavanaugh’s nomination Thursday was canceled and a hearing scheduled for Monday has been thrown into doubt, as Ford said she will not testify until the FBI investigates her allegation.