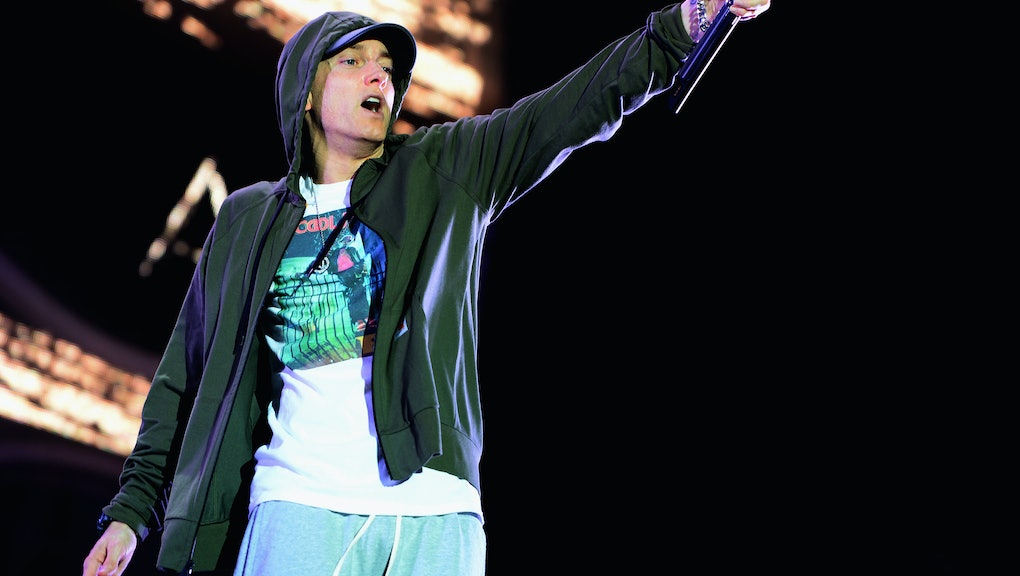 Does Eminem really expect us to believe he’s sorry for calling Tyler, the Creator a homophobic slur?

In a recent interview with Sway Calloway, Eminem offered a peculiar pseudo act of contrition over the latest use of his presumed epithet of choice, “faggot.” Targeting the rapper Tyler, the Creator on the track “Fall,” which is featured on his newest album, the surprise-released Kamikaze, Eminem raps, “Tyler create nothin’, I see why you called yourself a faggot bitch.” For anyone that has paid even a minuscule amount of attention to Eminem’s career, you know that the slur’s been a fixture in the rapper’s vocabulary for almost two decades.

Yet, suddenly we’re supposed to believe he feels bad about that. “I think the word that I called him on that song was one of the things where I felt like this might be too far,” the Detroit-bred rapper explained to Sway. “Because in my quest to hurt him, I realize that I was hurting a lot of other people by saying it.”

Eminem has his reasons to be angry. He claims to have first been angered by Tyler’s tweets bashing his label’s 2014 compilation, Shady XV, and rapper Earl Sweatshirt saying in a 2015 interview, “If you still follow Eminem, you drink way too much Mountain Dew and probably need to, like, come home from the army.” None of that sat well with Eminem, who told Sway, “I was like, ‘Really? What the fuck? You guys were just on tour with us, we hung out, we kicked it, made jokes.’”

To be clear, Tyler, the Creator has his own sordid history with “faggot.”

In a 2011 interview, he told NME about his use of the word: “I’m not homophobic. I just think ‘faggot’ hits and hurts people. It hits. And ‘gay’ just means you’re stupid. I don’t know, we don’t think about it, we’re just kids. We don’t think about that shit. But I don’t hate gay people. I don’t want anyone to think I’m homophobic.”

Tyler’s sexuality is up for debate, in light of raps on his 2017 album Flower Boy, but he, like Eminem, has used “faggot” with the intention to demean. What bothers me about men like this is they can fix their mouths to denigrate a man by calling him a “faggot,” but are not man enough to speak with conviction about the language they employ and the clear directive behind it.

And for Eminem, this controversy is the song that doesn’t end.

In 2013, he was criticized for rapping that he wanted to “break a motherfucker’s table over the back of a couple faggots and crack it in half,” among other things on the track “Rap God,” off of 2013’s Marshall Mathers LP 2.

When asked about it in Rolling Stone, he said he didn’t equate “faggot” with someone gay. “It was more like calling someone a bitch or a punk or asshole,” he claimed. “So that word was just thrown around so freely back then. It goes back to that battle, back and forth in my head, of wanting to feel free to say what I want to say, and then [worrying about] what may or may not affect people. And, not saying it’s wrong or it’s right, but at this point in my career — man, I say so much shit that’s tongue-in-cheek. I poke fun at other people, myself.”

A straight white man not recognizing his privilege is always the bane of everyone else’s existence.

In any event, this sort-of apology comes only after Eminem has received this same sort of criticism throughout his entire career. As a means of deflecting it when he was at his peak, the rapper infamously joined Elton John onstage at the 2001 Grammy Awards. They seem to maintain a friendship, but when has friendship with a black person ever stopped a white person from being racist? Moreover, if he stood onstage with a gay man to put down the notion he loathed gay people, why continue to use the word that started the controversy?

Eminem is undoubtedly one of the greatest rappers, but he apparently can’t manage to find another means of digging at a detractor besides calling him a faggot. Is he that lazy? Or is he that homophobic? It’s his fault that I still have to ask.

Eminem is a 45-year-old man that has been criticized for the same thing for almost half of his life. His response to that criticism is to repeat the same mistake. This issue involving Tyler, the Creator is the latest example of an ongoing problem. Eminem wanted to call him a faggot because that’s what he does. It’s as he’s always done. Because that’s the kind of person he is. He thinks to call a man a faggot is a way to humiliate him. It is ingrained. And it is very much homophobic. He refuses to change.

And let’s say he did have some miraculous revelation that words actually mean things — then it begs the question, what took so long? I understand the mentality of “better late than never,” but again, Eminem is 45 years old. What takes a man this long to understand that queer people are people, too?

In 2013, Eminem told Rolling Stone about the use of anti-gay slurs in his music, “I think people know my personal stance on things and the personas that I create in my music. And if someone doesn’t understand that by now, I don’t think there’s anything I can do to change their mind about it.”

This is incredibly disingenuous. There is no separation between the artist and the art when prejudices are used to build platforms and gain profits. His “personal stance,” whatever that means or may be, doesn’t let him off the hook for this purported persona.

So in that regard he’s absolutely right. My mind is made up about Eminem: He will say he has no ill will toward queer people but will let “faggot” fly out of his month the very second a man upsets him. That says everything we need to know about him; it always has.