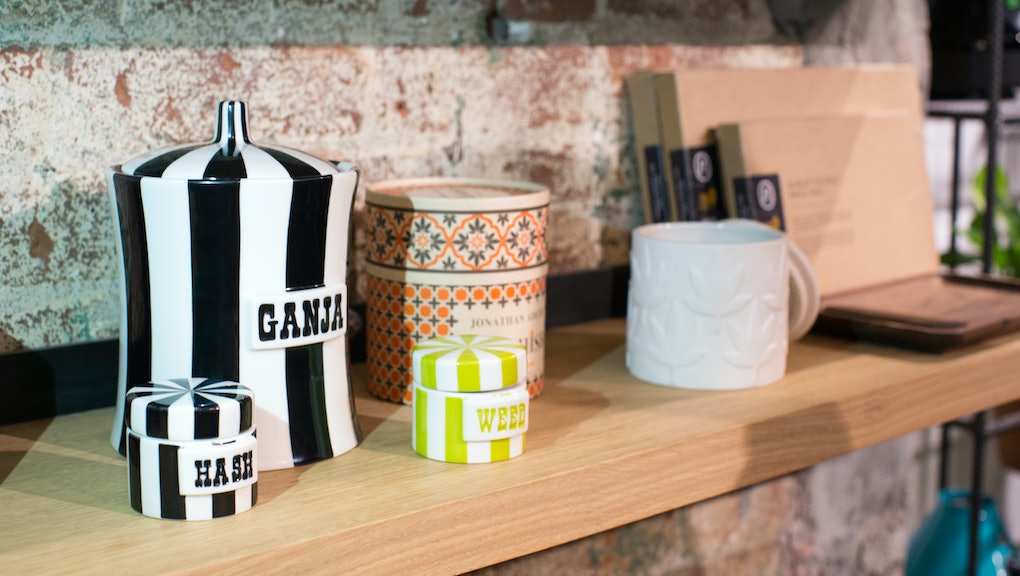 How Higher Standards is turning smoking into a high fashion commodity

The cliché of the stoner, while outdated, is pervasive. However, there’s a growing number of people who want marijuana and its accessories like they want their fashion: with options, both high and low.

Higher Standards, a brand and retail concept shop whose flagship store opened in New York City’s Chelsea Market in 2017, purports to be for the smoking connoisseur who wants to live an “elevated lifestyle.” It’s not just about the quality of the marijuana, but it’s also about the quality of what you’re smoking it out of as well. In other words, less Seth Rogen, more Rihanna.

“People are going out and spending hard-earned money on very high quality dry herb and concentrate and then taking it home and smoking it out of a dirty pipe or a vaporizer,” Higher Standards’ chief marketing officer Sasha Kadey said in an interview. “And you wouldn’t go and buy Wagyu and eat it off of a dirty plate.”

Kadey, who spent eight years in the wine and spirits industry and then another five years developing luxury cosmetics brands, leveraged his experience when first developing Higher Standards in 2016. “When we looked at the existing care and maintenance products out there, most of them more closely resemble automotive products or household cleaning products rather than anything that is luxurious.”

He noticed that cleaning those products was seen as a burden or a chore, whereas in the beauty or cosmetics space you have rituals and regimes that are rooted in promoting wellness or offering a therapeutic experience. In other words, same process, different sense of purpose. It’s that similar purposefulness that allows La Mer to sell $325 moisturizer, when you can buy a daily moisturizer for $6. Sure, the La Mer contains a “legendary healing elixir,” but it’s really about the sense of luxury and the lifestyle it begets that lures in the consumer.

To achieve something similar in the marijuana industry, Kadey knew he’d need to innovate. Kadey grew up in Southern California not far from the Venice boardwalks, one of the meccas of glassware and vaporizers, and also spent 10 years in Eugene, Oregon, known for its vibrant glass-blowing scene. In those places, he learned about the basic tools used for maintaining glass: isopropyl alcohol, rock salt, pipe cleaners and even kebab skewers.

This meant often going to a drug store, an arts and crafts store, maybe even a supermarket just to maintain what he describes as “functional art.”

From there it became a matter of creating a high-end aesthetic that resembles something more like a cosmetics brand, a kit that contained tools that real connoisseurs were already using. That ended up becoming the Supreme Clean Kit, which in addition to consolidating the tools necessary (including the addition of a resin bag and dot wipes), paid particular attention to how the product was packaged.

But beyond just products, the in-store experience at Higher Standards is also important. An elevated product needs an elevated environment, which is often everything that your standard smoke shop is not. To up the luxe factor, Higher Standards added lifestyle goods from brands like Jonathan Adler and MALIN+GOETZ and a staff that is equal parts retailer and cannabis educator. That staffing is essential given what could be the two biggest hurdles of all: the social stigma against marijuana and its current lack of federal legality.

“Alcohol is associated with 88,000 deaths per year, yet it’s able to court the luxury consumer,” Sheena Shiravi, director of consumer communications at Eaze, a cannabis technology company that connects adults to local retailers to get legal cannabis delivered on demand. “As consumers continued to be educated about cannabis and begin to see cannabis more easily integrated into their lives, we’ll start seeing cannabis brands targeted specifically and successfully at the luxury consumer.”

“For us, the best success we’ve had is establishing a wide network of authorized resellers, so all of the dispensaries, head shops, smoke shops, tobacco shops that carry our products and recommend them to our customers,” Kadey said. In other words, in order to be an innovation to smoke shops they first have to sell their products at those locales to spread the word.

The eventual goal, according to Kadey, is to add dispensary counters if marijuana becomes legalized in New York state. They’ve already created pop-up shops inside dispensaries throughout Los Angeles, allowing them to buy cannabis and devices to use it in one fail swoop.

If you haven’t noticed, there’s a lot here. And that’s without even getting deep into the complexities of marijuana legalization, which remains varied state by state, and prevents how and where they can market their product. But as marijuana continues to surge into the mainstream with growing appeal and lessening stigma, Higher Standards might be among the first in what could become the norm in cultivating and capitalizing on a luxury cannabis consumer.