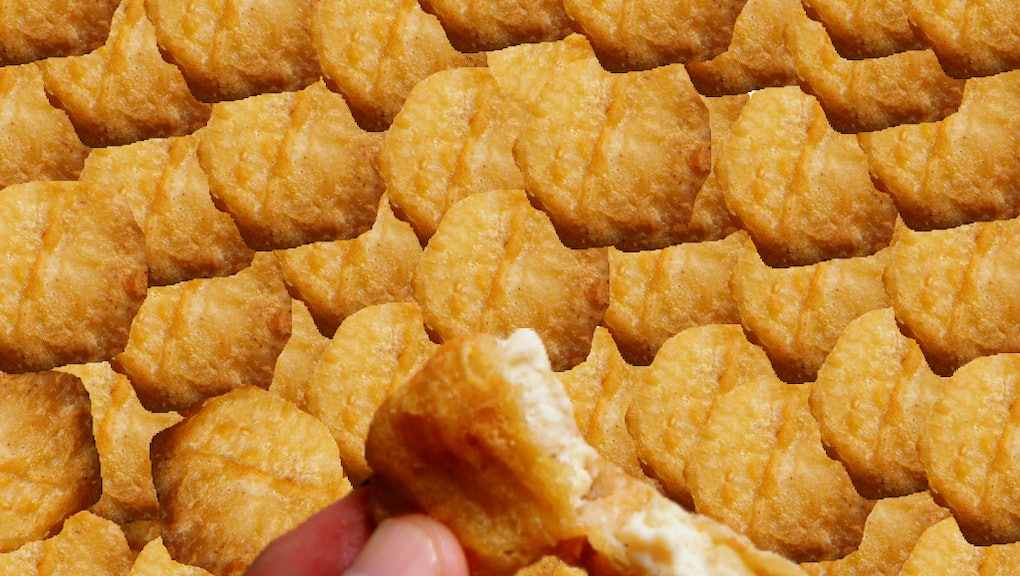 Can Shake Shack’s Chick’n Bites hold their own against McDonald’s Chicken McNuggets?

The late chef and author Anthony Bourdain once called McDonald’s Chicken McNuggets one of the most disgusting things he’d ever eaten — though not the worst, having also feasted on warthog anus while filming an episode of No Reservations.

“Given the choice between reliving the warthog experience and eating a McNugget, I’m surely eating the McNugget,” Bourdain told AV Club in 2008. “But at least I knew what the warthog was. Whereas with the McNugget, I think that’s still an open question.”

No one really knows where chicken nuggets come from, what they’re made of or why they look the way they do. But time and time again, we order them in all their fried, delicious and oddly shaped glory. And while Chick-fil-A has its own nuggets and Wendy’s has its tenders, the McNugget remains the undisputed leader of the boneless chicken bite.

In my eyes, no moment in adulthood comes close to a Saturday afternoon spent with my parents, buying several boxes of McNuggets in the hopes of finding a Boardwalk piece — the key to winning the $1 million prize in McDonald’s Monopoly game. McNuggets were a beacon of hope and remain that way for me now, in spite of competitors offering new or healthier renditions.

So when Shake Shack announced it was adding chicken nuggets — called Chick’n Bites — to its menu, I was intrigued.

“We took a moment to build it from the ground up — how it’s marinated, how it’s cooked, the flavor profile of the flour, the crispy-crust-to-chicken ratio, how big the bites felt in your hand, how easily they dipped into sauces,” Shake Shack chef Mark Rosati told Today Food. “We spent a lot of time making sure the profile felt good.”

As a McNuggets enthusiast through and through, I needed to try the Chick’n Bites for myself. I went to Shake Shack’s newly opened Innovation Kitchen in Manhattan to decide if the nuggets could stack up against my beloved McDonald’s.

Who prepares their nuggets better?

Shake Shack’s nuggets are fresh, never frozen, according to Today. They’re also made with antibiotic-free chicken breast prepared sous vide before being battered and deep-fried.

In an effort to be more transparent about its admittedly questionable McNuggets preparation, McDonald’s Canada released a video in 2014 showing production process. At a factory, McDonald’s throws chicken breast, skin and seasonings into a blender. The mixture is molded into shapes, coated in a light batter, coated again in a thicker tempura batter and then par-fried, which sets the batter but keeps the chicken raw so it can be fried later in stores.

The verdict? Shake Shack. Fresh, free of antibiotics and all the other buzzwords give it the advantage here. A 2012 study even found that cooking sous vide can extend a food’s shelf life and possibly reduce bacteria.

At Shake Shack’s Innovation Kitchen, customers order and pay via automated kiosks, which require zero human interaction — unless you actually prefer to order with a cashier, which is still an option. Shake Shack also texts you when your order is ready.

McDonald’s offers mostly traditional counter service, though Business Insider reported that most of the chain’s 14,000 locations will have digital kiosks installed by 2020.

The verdict? Shake Shack. McDonald’s hasn’t texted me (yet).

How do they taste?

Shake Shack’s Chick’n Bites are seasoned to death. The breast itself is flavorless and tough; the skin is thin. It’s hard to eat more than a few at a time because of the overwhelming seasoning. The honey mustard, one of two sauce options offered beyond ketchup, isn’t great and slightly sour.

McNuggets, on the other hand, need little seasoning nor sauce. The skin, which offers a slight crunch when prepared perfectly, is the best part. The meat is light, a little salty and, of course, very greasy.

How do they taste after being reheated?

After putting the Shake Shack box in a microwave for 30 seconds, I discovered a honey-mustard crime scene, having accidentally left the cup inside. The chicken was still very tough; the residual taste in my mouth still very strong.

McNuggets can be reheated and still taste very much the same, but are best prepared in the oven to maintain that necessary crunch-factor.

The verdict? McDonald’s, even after being left in a hot car for awhile. McNuggets are preserved enough to sustain themselves through an apocalypse and still taste like they’re fresh out of the fryer.

Can you bring them to a work meeting in a small, enclosed room without judgment?

No, you can’t bring Shake Shack’s nuggets to an important meeting in a small room. The smell of your breath will fill the space and your colleagues will file a complaint with human resources. But at least people think Shake Shack is cool and trendy.

Bringing McNuggets to a work meeting isn’t a great idea, either. They’re a little greasy, so you wouldn’t be able to write anything down or type on a laptop without leaving stains. They’re also a little juvenile in their small boxes, which means your co-workers won’t take you seriously when you have something to say.

The verdict? Shake Shack, because I live in fear of judgment.

Everything about Shack Shake’s chicken nuggets is great, in theory. Fresh, antibiotic-free chicken breast you can order from an iPad — what’s not to love? But the seasoning kills any appeal, as does the lack of sauce options for those who need it.

McNuggets, on the other hand, are perfect in both taste and consistency. And no matter how long they may or may not remain in a refrigerator before being reheated, they taste as if you’ve just ordered them. McDonald’s remains the champion of the nugget world because it’s managed to master the right amount of crunch and seasoning, both of which were absent from Shake Shack’s iteration.

If it ain’t broke, don’t fix it — and McDonald’s McNuggets are far from broken.