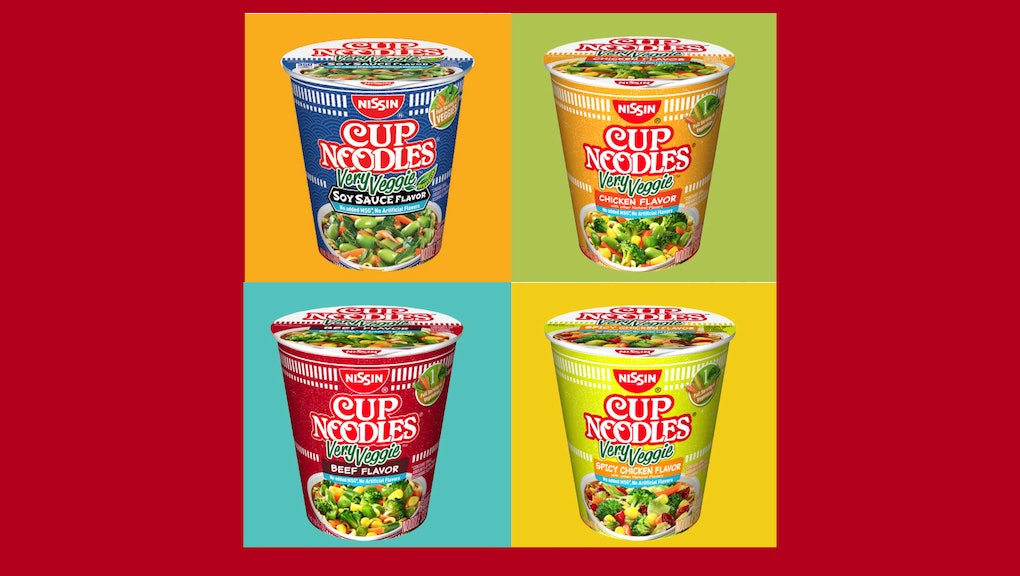 Tuesday will be a day to remember for noodle-loving vegetarians on a budget: It is the day a vegetarian flavor of Cup Noodles finally arrived to the market. Patience is a virtue, people.

Cup Noodles’ Very Veggie Soy Sauce, made with edamame, carrots and bok choy, is the brand’s first-ever vegetarian product. In 2017, Cup Noodles launched its Very Veggie line, which promises a full serving of vegetables in every cup. Despite the focus on vegetables, the soups were made with either chicken or beef flavoring, deeming it inedible for herbivores.

According to a spokesperson from the brand, Cup Noodles rolled out the new veg-friendly variety because it’s what the people wanted. “The No. 1 piece of feedback we received from consumers who were excited about all the veggies in Cup Noodles Very Veggie? ‘How about a vegetarian one with a full serving of veggies?!?,’” Jaclyn Park, director of marketing for Cup Noodles, said in an email. “With the steady rise of vegetarianism across the nation, we know all kinds of consumers want to enjoy delicious and satisfying Cup Noodles – not just vegetarians, but also flexitarians and people who just want to eat more vegetables!”

Nissin, the manufacturer of Cup Noodles, is also the producer of Top Ramen, the dried noodles that come with a flavor packet, but without a cup. Top Ramen makes two vegetarian options, though the soups’ meatless-ness isn’t heavily advertised on the package: Both Top Ramen Soy Sauce and Top Ramen Chili are made without meat.

Created in 1971, Cup Noodles has been a college student staple for its accessibility and price point (99 cents a cup!), and the brand has developed a bit of a cult following over the years. But Momofuku Ando, who created the flash-fried noodles in 1958, was motivated the goal of ending world hunger, Karen Leibowitz wrote in Lucky Peach (now reprinted in Gizmodo). “Food shortages continued to plague Japan for years after World War II, and Ando concluded that hunger was the most pressing issue of his time,” Liebowitz wrote. “He believed that ‘peace will come to the world when all its people have enough to eat.’ Ando wanted to help Japan feed its entire population.”

If you’re craving some vegetarian Cup Noodles, you can find locations that sell them here.