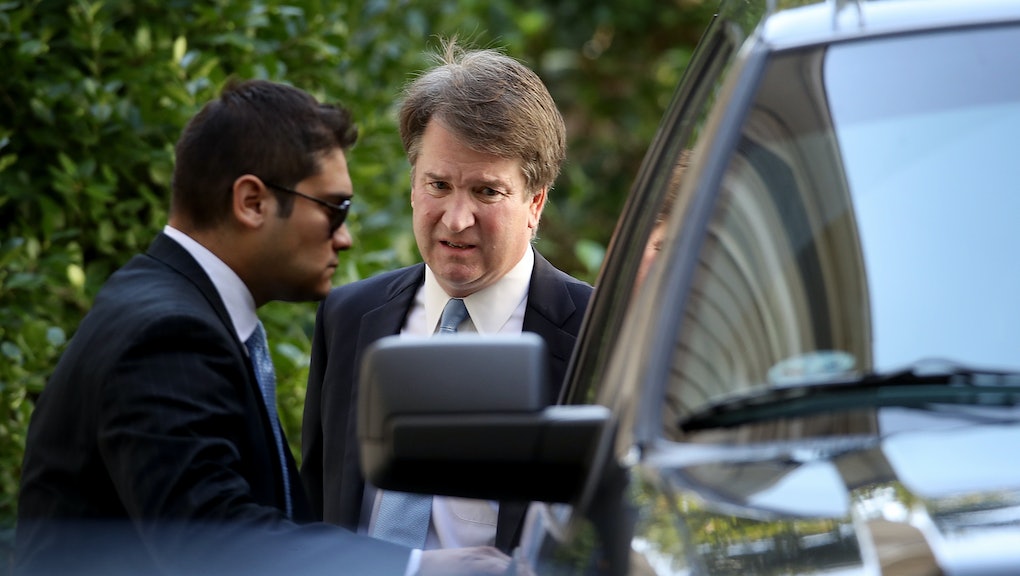 Both Supreme Court nominee Brett Kavanaugh and Palo Alto University professor Christine Blasey Ford, who accused Kavanaugh of sexual assault when both were in high school in the early 1980s, are set to testify before the Senate Judiciary Committee on Thursday.

Though Republicans are giving Ford a venue to hear her allegations, they’re already plowing ahead with Kavanaugh’s confirmation, scheduling votes for Friday and advising members not to leave Washington for the weekend in order to set up a full Senate vote on Kavanaugh’s nomination.

This comes as a third woman has come forward on Wednesday with a sworn declaration that she witnessed Kavanaugh “drink excessively and engage in highly inappropriate conduct, including being over aggressive with girls and not taking ‘no’ for an answer.”

Democrats, including Sen. Kirsten Gillibrand, say the hearing is a “sham.” They have blasted Republicans for refusing to hear testimony from outside witnesses, including Kavanaugh’s high school friend and conservative activist Mark Judge, who is alleged to have been present during Ford’s alleged assault, as well as at parties where women were inebriated and drugged girls were allegedly gang raped. Democrats have also slammed the GOP for already scheduling votes, suggesting they’ve made up their mind about the accusations.

“For Republicans to schedule a Friday vote on Kavanaugh today, two days before Dr. Blasey Ford has had a chance to tell her story, is outrageous,” Sen. Dianne Feinstein (D-Calif.), the ranking member on the Senate Judiciary Committee, tweeted Tuesday. “First Republicans demanded Dr. Blasey Ford testify immediately. Now they don’t even need to hear her before they move ahead with a vote.”

Republicans, meanwhile, are attacking Democrats on process, questioning why they sat on Ford’s allegations until after Kavanaugh’s hearings wrapped up.

“Democratic colleagues did not treat Dr. Ford or her allegation with the seriousness and discretion she deserved,” Senate Majority Leader Mitch McConnell tweeted Wednesday. “At the 11th hour, when its introduction was certain to introduce further delay, they got it to the press. So much for Dr. Ford’s request for confidentiality, I guess.”

The Senate hearings are set to begin at 9:30 a.m. Thursday morning, with Ford testifying first, followed by Kavanaugh.

Democrats have not had contact with Ford, according to Politico, and therefore do not know how she’ll hold up amid the pressure of facing the nation at a public hearing.

Republicans have hired outside counsel to question Ford during the hearing, as the entire GOP side of the Senate Judiciary Committee is made up of older, white men — an optics issue for the party. The outside counsel Republicans hired, Rachel Mitchell, is chief of the special victims division of the Maricopa County attorney’s office in Arizona, who has experience with sexual assault cases.

Ahead of Ford’s testimony, her lawyers released sworn statements from four people who corroborate Ford’s accusations. They include Ford’s husband, Russell Ford, and family friends Keith Koegler, Adela Gildo-Mazzon and Rebecca White. All swore under penalty of perjury that Ford had told them about her sexual assault, and that the man who assaulted her had become a federal judge — which Democrats are sure to point out and ask questions about during the hearing.

Swetnick’s allegations add a whole new level to the hearing, as Kavanaugh will now face questions about those accusations.

Kavanaugh released a calendar from the year Ford alleges he tried to sexually assault her as proof that he wasn’t at a party when Ford alleges she was sexually assaulted. But Swetnick’s sworn statement says that some of the parties where she witnessed inappropriate Kavanaugh behavior were at “beach week” — which is written in large letters on Kavanaugh’s calendar. Kavanaugh’s friend Mark Judge is also listed as attending some of the parties, according to Kavanaugh’s calendar.

Kavanaugh has denied he engaged in any inappropriate behavior, including denials that he drank in excess. Those claims, which Kavanaugh made in a Fox News interview, are refuted not only by Swetnick, but also by Yale University classmates, who told the Washington Post that Kavanaugh was a “sloppy drunk.”

“You can’t lie your way onto the Supreme Court, and with that statement out, he’s gone too far,” Lynne Brookes, a Republican and classmate of Kavanaugh’s at Yale, told tie Washington Post. “It’s about the integrity of that institution.”