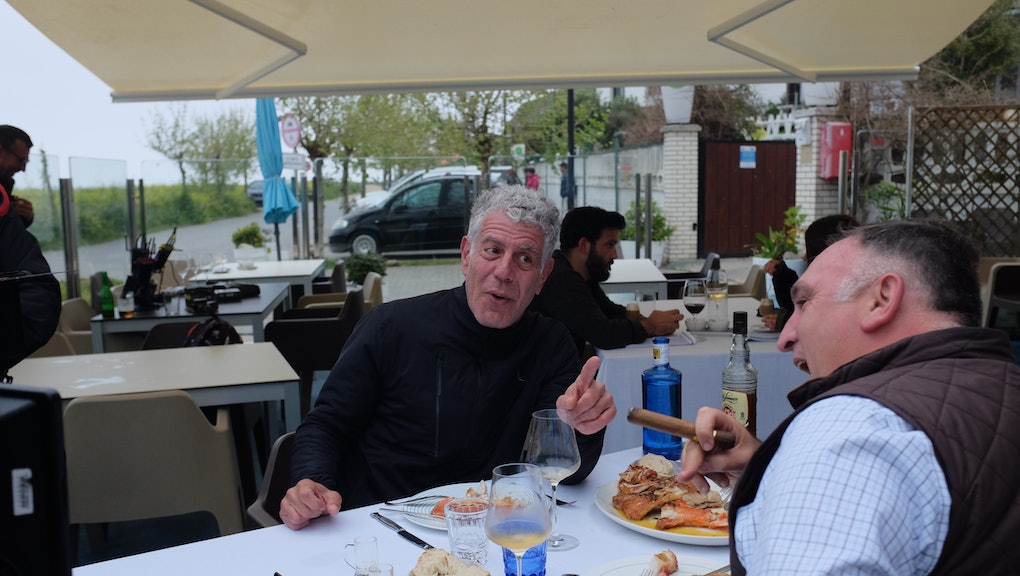 Sunday’s episode of Anthony Bourdain’s “Parts Unknown” is the first in which Bourdain doesn’t serve as the show’s narrator. It’s not the same when chef José Andrés, who brought Bourdain to his hometown of Asturias, Spain, subs in to chronicle the adventure. But through Andrés, we get a better look at the guy whose closest friends affectionately called him “Tony.”

Bourdain and Andrés play a kind of odd couple, and they’re a pleasure to watch on screen. Andrés assumes the role of a jolly, boisterous host; he flies across an unstable bridge with the energy of a kid, arms out for balance, imitating a bird. Bourdain, on the other hand, trudges across this bridge in his boots, unmoved by his friend’s energy, in a militaristic fashion.

Their pairing doesn’t stick to the script of the classic clown-befriends-grouch trope that we so often see: Andrés definitely brings out Bourdain’s goofy side. Their relationship is hysterical, and both Bourdain and Andrés appear gleefully aware of the parts they play and how to best work off each other.

In the episode, Andrés leads Bourdain around Asturias’ rugged environment; they hike to a remote village, consider the dangers the Asturians endure when fishing for gooseneck barnacles off jagged ocean cliffs and discuss the traditions of salmon fishing and the meaning behind it.

Where the two come together, of course, is over food: Andrés and Bourdain share a palpable appreciation of good food and the work that goes into creating it. They nerd out over an enormous platter of spider crab during a scene in which Andrés takes a piece of the crab and shoves it underneath Bourdain’s nose so he can smell what seafood is supposed to smell like.

After their mountain hike, the pair enjoys fabada, a rich bean stew that Andrés refers to as the defining dish of Asturias. Bourdain relishes in the dish, saying, “These beans really are magical beans.”

While the two use different language to express their appreciation for food, they clearly admire the other’s take. “You show all of us that it’s worth it to go to the end of the world for the right food,” Andrés says to Bourdain. “And for the right stories.” There are moments like this throughout the episode where it’s difficult to tell if the scenes were edited to reflect an in-memoriam type feel — or if it’s simply this way because of the emotional nature of this season.

At one moment, Andrés is shot sitting off to the side, appearing pensive. “It’s easy to love Tony,” he says to no one in particular. “He seems like he doesn’t care about anything but himself, but then you can see it. He’s the most caring person I’ve ever met. That’s why I’m happy and proud to call him a friend.”

In a way, it seems like the producers give Andrés this type of scene to establish that no one can — or is trying to — take Bourdain’s place. His show might go on, but it will never be like it was. At the same time, Andrés’ words come off as just honest: His admiration for his friend is genuine.

We know the two chefs shared a powerful bond from stories even before the episode aired. On screen, we get to watch how earnestly each loved the other’s idiosyncrasies, and it’s very fun just to be included.