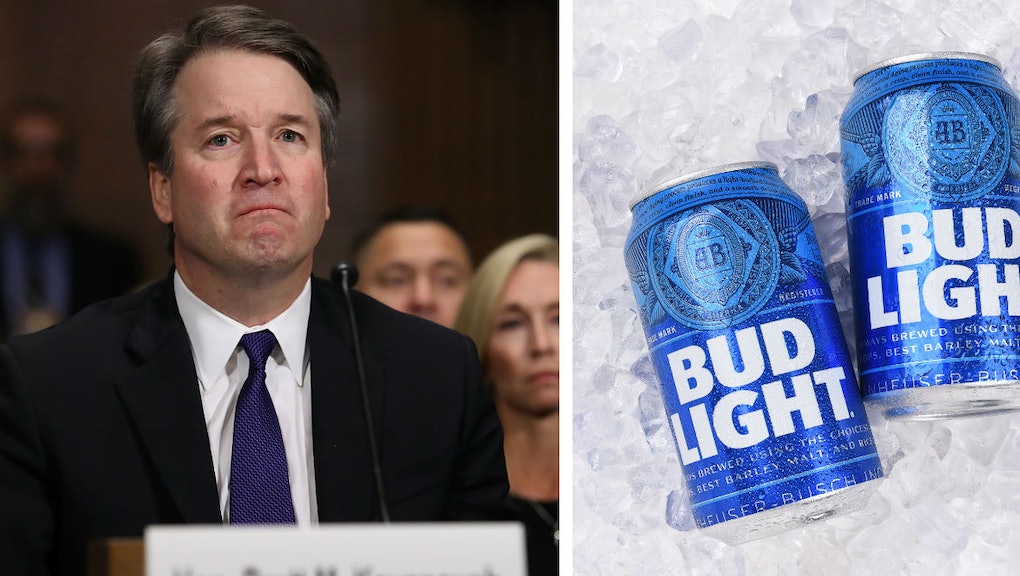 “I liked beer. Still like beer”: How Brett Kavanaugh used the all-American beverage to make his case

During Thursday’s Senate Judiciary Committee hearing, Supreme Court nominee Brett Kavanaugh used the word “beer” 29 times. He also referred to football 11 times and lifting weights on three separate occasions. Kavanaugh’s constant mention of casual drinking, sports and weights often felt purposeful. Every mention of beer or weights was dropped precisely when a line of questioning felt alienating, to the point that a transcript of the hearing reads like a skipped record. “Yes, we drank beer. My friends and I, the boys and girls. Yes, we drank beer. I liked beer. Still like beer. We drank beer,” he said during the hearing.

In one instance, Kavanaugh deflected a question regarding a possible reference to alcohol in his yearbook and asked Sen. Sheldon Whitehouse (D-R.I.) if he, himself, liked beer. By design, this deflection and constant talk of alcohol are attempts to endear himself to the American public: In his mind, he’s just another guy that enjoys beer, who happens to be caught in the crosshairs of a sexual assault allegation while being nominated for the Supreme Court.

In July, USA Today reported a former clerk of Kavanaugh’s described him as “intellectually voracious” and a “cutting-edge textualist thinker” — but also “a Bud Light kind of guy,” as if to suggest, in spite of his accolades, he’s still a very down-to-earth guy who is concerned about calorie counts, like the rest of us.

Why the obsession with beer? Well, put simply, drinking it is a pastime for a lot of Americans. It’s as patriotic as eating a hot dog or tailgating at a football game. Often considered a man’s drink, beer is accessible, unlike expensive wines or hard liquors. Kavanaugh wielded the beverage in the hearing to remind the public he’s an everyman — as opposed to the product of privilege he is.

Kavanaugh’s professed love of the all-American beverage of beer paints him as a creature of a very all-American culture — one that has been shaken by the #MeToo movement. A recognition of women reporting assault and rape is more important than ever because even when put on trial, men like Kavanaugh fail to recognize their severity.

The dichotomy between Ford and Kavanaugh couldn’t be clearer — and we may be in the midst of real cultural change. Next week will reveal more about whose side America is on: the high schooler who just wanted to drink beer, or the woman who has lived with horrifying memories since high school.