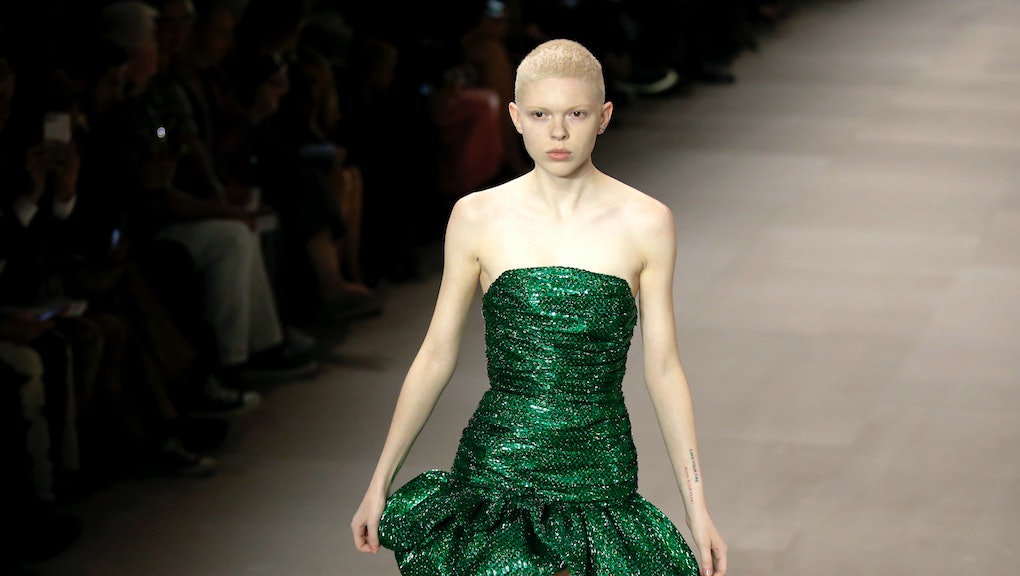 Perhaps the biggest show across all of Fashion Month — which includes shows in tentpole cities New York City, London, Milan and Paris — was the highly anticipated debut of creative director Hedi Slimane at Celine.

Slimane, who held creative director positions at Dior Homme and Yves Saint Laurent previously, is one of the fashion world’s most enigmatic figures, or polarizing, or brilliant, depending on who you ask and on what day. He’s merciless in his refutation of critical analysis, yet largely reclusive. He grants limited, albeit memorable, interviews.

In Slimane’s debut at Paris Fashion Week, he didn’t seem particularly interested in answering the call for more diversity on runways that’s permeated fashion industry conversations. Of the 96 models to walk the show, only nine were models of color; the show was 91% white. This number is particularly glaring when you look at it in comparison to New York Fashion Week, which just closed out its most inclusive season ever, with 44.8% models of color on the runway.

“Hedi Slimane’s Saint Laurent runways were notoriously whitewashed and it’s disappointing to see that he’s carrying on the tradition for Celine,” the Fashion Spot’s Jennifer Davidson said in an interview.

Other fashion experts and people on social media quickly called out the overwhelming whiteness of the Celine show.

“A few sharply tailored XXL shouldered looks stole the show, but most glaring was the fact that it took 30 exits to see a model of color,” wrote Diet Prada in their somewhat-scathing review. “While [Slimane] has a way of unearthing our hidden desires from time to time, the white youth obsession is something we definitely won’t be buying into.”

“You are talking Hedi Slimane ... I am happily surprised he used any models of color,” fashion activist and model Bethann Hardison wrote in the comments of @moremodelsofcolor’s Instagram, which called out the brand, including its casting director Ben Grimes. “God bless him. Not a fan. #prayingforceline.”

“50 shades of white,” model Natalia Castellar Calvani wrote further down in the comments section of the post.

The conversation was, of course, not limited to Instagram.

Slimane’s runway refutes a growing narrative that fashion is becoming increasingly more aware of its diversity problem (see the Washington Post’s story “Fashion is finally figuring out diversity — in ways that actually matter” or the New York Times’ “Diversity, of All Kinds, Is on the Rise at Fashion Shows”).

Like it or not, Slimane’s runway, perhaps the most looked at and certainly the most talked about one at Fashion Month, helps establish the barometer of “it,” “cool” and “chic.” So the largely white show — and don’t even get us started on the total lack of plus-size models — not only reverses past progress but calls into question the unity of the industry’s efforts.

“All these beautiful colors in the world and you stuck on one type?” actor and model Liris Cross said in an interview. “Legacy brands give less regard to diversity and I feel it is because they are still ruled by the ‘old regime.’ [Christian] Siriano and Chromat are self-made and modern so they get it and why it’s important. If some of these legacy brands want to step into the new age, I suggest they do the same.”

The show also provided a first look on whether Slimane was the right person to take the reins of Celine from Phoebe Philo, a designer once called the world’s leading feminist fashion designer.

From the business side, Slimane seemed like the right fit. In 2015, just three years into his tenure at Saint Laurent, Slimane more than doubled its sales revenue.

However, for many, the appointment seemed puzzling, to say the least. Slimane’s aesthetic has been described as “rocker chic,” whereas Celine, the 73-year-old French brand founded by Céline Vipiana, is known for, as Vogue’s Nichole Phelps once wrote, “fashion for smart, sensitive women by a smart, sensitive woman.”

Early reviews of the show more than suggest that Slimane has a lot to learn when it comes to using fashion as a feminist act.

“Is Hedi Slimane the Donald Trump of fashion?” asked Pret-a-Reporter’s Booth Moore wrote in her review. “To some people for whom buying a $4,000 coat designed by a woman was somehow perceived to be a feminist act, the storyline may be familiar: Rob a female of a job she seemed perfect for, and replace her with a man who burns down the house,” she wrote.

Yes, fashion is a business, so whether or not Slimane’s tenure will convert to a sales bump for the brand is at this time unknown.

But one thing is abundantly clear: The Celine brand, one created by a woman and overseen by a woman for the past decade, is now at the command of a man who has already told the industry and consumers that he has little concern for the way things were at Celine. And if his first Celine showing is any indication, he doesn’t seem to be creating a future for the brand that puts him anywhere outside of the center.