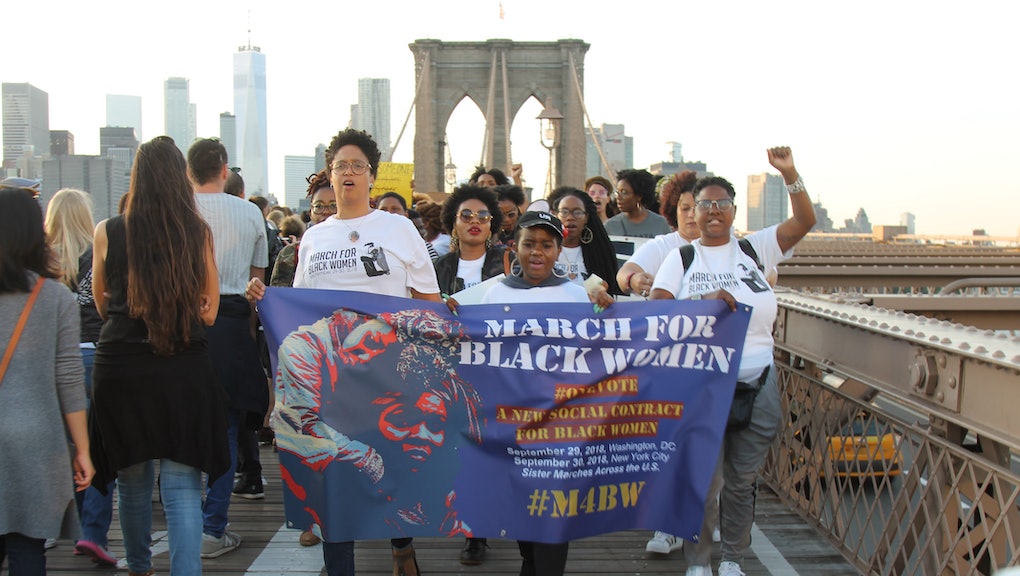 NEW YORK CITY — “I love black women! You don’t love black women? What’s wrong with you?” demonstrators for the March for Black Women chanted as they walked from Manhattan to Brooklyn via the Brooklyn Bridge in New York City on Sunday.

Multiple issues disproportionately harm black women and girls’ lives, including sexual violence, policing, a broken immigration system and the epidemic of homicides against black transgender women. At least 300 protesters convened at the event to call for a new social contract for black women to dismantle these injustices. The march was organized by Black Women’s Blueprint, a civil and human rights organization empowering women of African descent, and was centered on believing survivors of sexual assault and silencing them no longer.

According to the Institute for Women’s Policy Research, 21.2% of black women are raped during their lifetime, compared to 19.3% of women overall. Organizers demanded the reauthorization of the landmark Violence Against Women Act, which ensures programs, funding and protections for victims of rape and domestic violence. The law was set to expire Sept. 30, but was extended until Dec. 7, Roll Call reports. Demonstrators also echoed growing sentiment against the Supreme Court nomination of Brett Kavanaugh, amid accusations he sexually assaulted Christine Blasey Ford while they were in high school.

“What a time we are living in with the fiasco taking place in and around our highest court and the expiration of the Violence Against Women Act,” Gina Belafonte, daughter of activist and actor Harry Belafonte, said during the kick-off rally outside New York City Hall Park. “These are precarious times and we must harness the legacy of what is good, fair and righteous.”

The crowd began gathering at 3 p.m. and participants were welcomed by the Healing Drum Collective, a group of female drummers, who beat djembes, burned sage and poured libations. There was also an alter, where participants could stand and remember loved ones who have died.

“One of the ways violence really impacts women of color is that it takes their spirituality away,” Dayanara Marte, a healing justice consultant for Black Women’s Blueprint, said. “So we open up all of our events with an honoring of our ancestors, of our legacy, where we came from and invoking them into our space and also having things that represent the innate power that women have to heal and recover within.”

After the healing ceremony, the crowd heard from a series of speakers before marching over the Brooklyn Bridge to Whitman Park, where a candlelight vigil was held until sunset. Participants carried signs with provoking statements such as, “Trust black women, none of us are free until all of us are free,” “Black women and the culture are synonymous,” and, “Let’s not forget, white feminism was built on the backs of women of color.”

At the rally, co-founder and executive director of Black Women’s Blueprint, Farah Tanis recalled a world without VAWA as a child. On a cold rainy night, her mother attempted to escape after experiencing domestic violence with her, her siblings and a bag of dirty laundry. Because she had nowhere to get help, Tanis’ mother returned home and faced further abuse from Tanis’ father.

“I believe that night my mother cried tears that gave me voice today,” Tanis said. “That keeps me going so that I can speak.”

Dorcas Davis, co-founder and co-chair for the March for Racial Justice, also told attendees to repeat the names of black women who were killed by police in 2018: Cynthia Fields, Lashanda Anderson, Decynthia Clements, Crystalline Barnes and Geraldine Townsend. The issue of how black women are excessively policed by authorities is not spoken about often enough.

“Each of the women you just named had their lives ended because of the systemic violence in our justice system,” Davis said.

Remembering these women’s names was a important reminder for “reimagining a world for black women and girls where they are safe, cared for, loved and celebrated for their whole humanity,” she continued.

At the close of the ceremony in Brooklyn, marchers gathered in a circle and repeated the names of more than a dozen black trans women who have been killed in 2018, including Londonn Moore, Shantee Tucker, Dejanay Stanton, Vontashia Bell and Sasha Garden.

“I think more people should be talking about trans girls and women but they are not,” Charlie Trotman, community engagement coordinator for Girls for Gender Equity, told Mic during the event. The organization trains girls how to advocate for themselves. “We have to make sure that we are uplifting black trans girls and women. We always include transgender and non-conforming folks in our work knowing that’s part of feminist work and not separate.”

Patricia Okoumou, an activist notable for scaling the base of the Statue of Liberty to protest racist immigration policies on the Fourth of July, was also present at the March for Black Women. She told Mic it was important for her to a stand with black women and survivors of violence.

“I call all of us survivors because we’ve been through so much and the term victim just keeps us down and tries to oppress us,” Okoumou said. “So I march over here with my belly full, and I’m not tired because it’s for a good cause.”