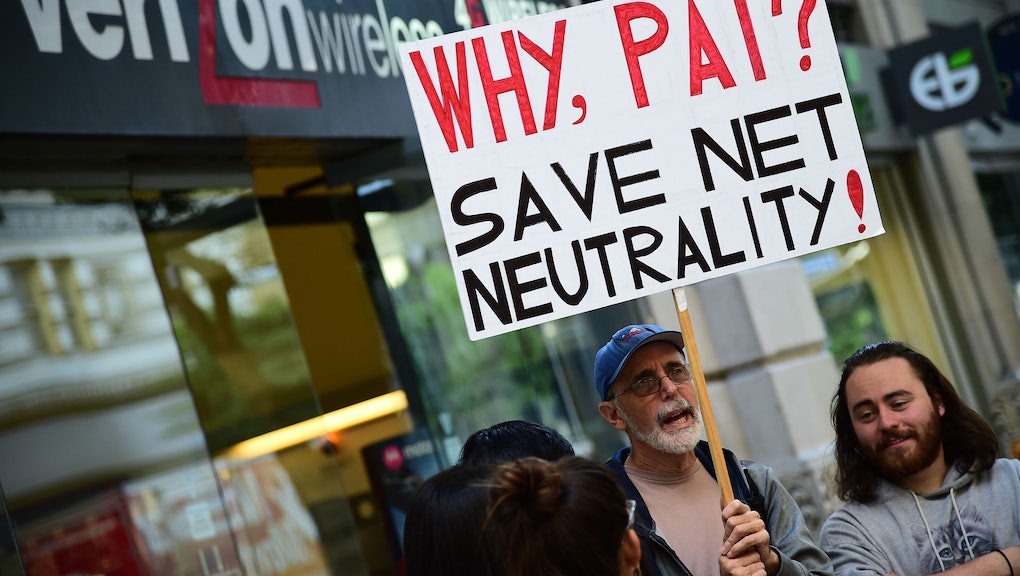 California officially passed the toughest net neutrality law in the country Sunday. Then, within hours, the Trump administration sued the state over the legislation.

The U.S. Department of Justice filed a lawsuit Sunday against the California Internet Consumer Protection and Net Neutrality Act of 2018, or SB 822, which California Gov. Jerry Brown signed into law earlier in the day.

SB 822, which international non-profit digital rights group the Electronic Frontier Foundation described as a “gold standard” of net neutrality legislation, re-establishes the net neutrality protections that the Federal Communications Commission repealed in December 2017, including prohibiting internet service providers from paid prioritization, blocking content and throttling data. The legislation went even further than the previous federal guidance, however, banning such other ISP practices as “zero-rating” schemes, in which providers prioritize their own apps and services by excluding them from data limits.

“Net neutrality, at its core, is the basic notion that we each get to decide where we go on the internet, as opposed to having that decision made for us by internet service providers,” California State Sen. Scott Wiener, who co-authored the legislation, said in a statement after Brown signed the bill into law. “It’s also about ensuring a level playing field for ideas and for businesses trying to compete. Today marks a true win for the internet and for an open society.”

The Trump administration asserted in its lawsuit that SB 822 is unlawful, as it is preempted by federal law — and “violates the Supremacy Clause of the United States Constitution.” Federal communication law, the administration contends, preserves federal authority over interstate communications, such as internet communications governed by net neutrality. The FCC order repealing the net neutrality guidelines stipulated that the order preempts any state or local measure that would impose rules or requirements that it’s repealed, or decided to refrain from imposing.

“In short, SB 822 conflicts with and otherwise impedes the accomplishment and execution of the full purposes and objectives of federal law,” the lawsuit argues.

In a statement, U.S. Attorney General Jeff Sessions vowed to fight against the California law “with vigor.”

“Under the Constitution, states do not regulate interstate commerce — the federal government does,” Session said. “Once again the California legislature has enacted an extreme and illegal state law attempting to frustrate federal policy. The Justice Department should not have to spend valuable time and resources to file this suit today, but we have a duty to defend the prerogatives of the federal government and protect our Constitutional order.”

The California law is the latest action by states to preserve net neutrality principles, as at least six governors issued executive orders upholding net neutrality and legislation has been enacted in Oregon, Washington and Vermont. Federal legislation to overrule the FCC on net neutrality has passed the U.S. Senate, but stalled in the House of Representatives, despite efforts to force the issue to the House floor through a discharge petition. The petition has so far received 177 signatures and needs 215 total signatures to succeed.

In addition to going further than other state legislation in its scope, the California legislation is particularly distinctive because of the state’s large size and tech economy; the New York Times noted that the regulations could encourage ISPs to extend the same rules to other states.

The struggle between California and the Trump administration is familiar. The state has previously pushed back on other administration policies, ranging from immigration to the environment. California already largely succeeded against a Trump administration lawsuit arguing the state’s sanctuary laws protecting undocumented immigrants violated the Supremacy Clause — but it’s unclear how this new legal challenge will play out.

In an interview with Mic in June, Ernesto Falcon, legislative counsel at the EFF, noted that state regulation of ISPs was “uncharted water” and said it was a “close call” to predict how any then-potential lawsuits could play out. While Falcon noted that “the FCC itself does not have the authority to preempt states” through its order repealing net neutrality, the “dormant commerce clause” allows the federal government to preempt state law in interstate matters, and state regulations cannot “unduly burden” interstate commerce efforts.

“States can intrude in the interstate commercial space, so long as their interests are sufficiently high enough to do so, and the burden is sufficiently low enough that Congress would find it permissible,” Falcon said.

Telecommunications companies may also file their own lawsuits against California, as the law could result in increased costs for companies and a “patchwork” of various regulations across the country.

California officials remain optimistic about their ability to defend the law. Wiener said in a statement he has “complete confidence” in California Attorney General Xavier Becerra, who has already vowed to fight the Trump administration’s legal challenge.

“While the Trump Administration continues to ignore the millions of Americans who voiced strong support for net neutrality rules, California — home to countless start-ups, tech giants and nearly 40 million consumers — will not allow a handful of power brokers to dictate sources for information or the speed at which websites load,” Becerra said in a statement quoted by Politico.

“We remain deeply committed to protecting freedom of expression, innovation and fairness,” he added.