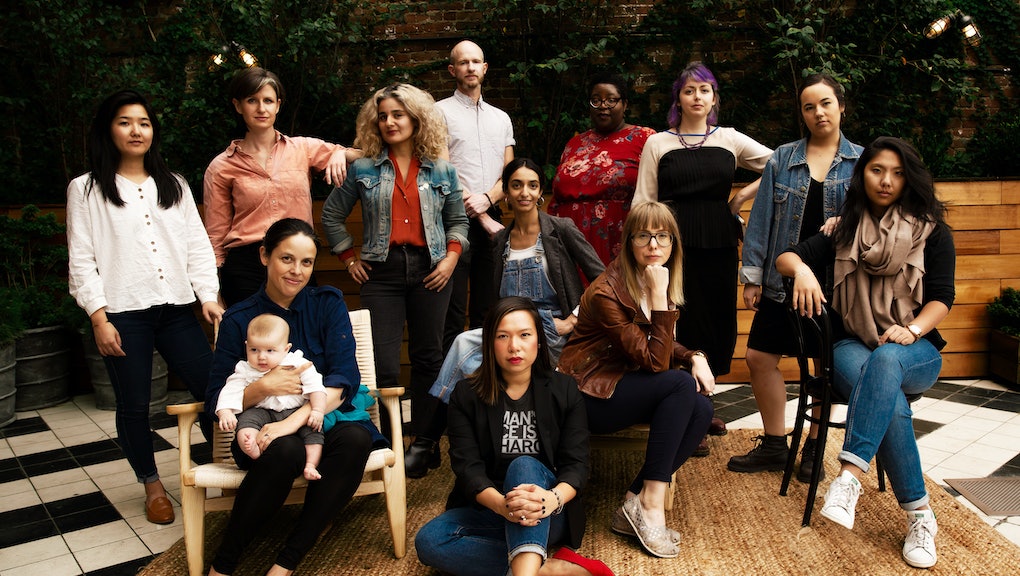 It’s 5 p.m. on Monday at the Wythe Hotel in Williamsburg in Brooklyn, New York, and a room full of women — and just a few men — are grouped around long wooden tables next to easel-sized sheets of white paper stuck to brick walls with phrases like “Covenant to end wage gap disparity,” “the makeup of a mentor,” and “empowered kitchens are powerful kitchens,” written in marker.

These 75 or so people — some of whom traveled overnight to be here, others who gave up their one night off in a work week that extends well beyond 40 hours — gathered for Women in Hospitality United’s Solution Sprint. The one-day event brought together elements of a tech-world hackathon and a design sprint to tackle issues facing the restaurant industry. Some of the topics addressed were the #MeToo movement, harassment, mental health, the wage gap and the challenges of working parents. I attended as a reporter, listening to on-the-record presentations and sitting in on off-the-record conversations between participants — many of which were deeply personal and poignant.

In late 2017, when reports of repeated alleged sexual harassment perpetrated by Mario Batali and New York restaurateur Ken Friedman were reported in the press, Elizabeth Meltz, who worked for Batali at the time, felt compelled to act. “I felt very much like, ‘Oh my God, am I part of the problem?” she said in a phone interview. “Am I part of the solution? Did I know this? Should I have known this? … I just thought, I can’t be the only one.” She reached out to her network of women in hospitality, secured a space to meet, identified a facilitator and gathered 45 women for an open discussion.

With the help of Erin Fairbanks, who co-owns a social impact consulting firm called Grout, and Liz Murray, the director of human resources and communications for Andrew Tarlow’s restaurant group, the meetings became monthly events. By the fourth, the three concluded there was momentum for change, but a monthly two-hour meeting wouldn’t shift matters in the way they envisioned. Fairbanks proposed a hackathon and the three devised a plan for the Solution Sprint.

“We didn’t want to have a sexual harassment conference,” Fairbanks said. “That would have been very different. Ultimately all of these other issues are really bound together: How people are paid, who has power as it relates to money is related to who gets to talk and who doesn’t get to talk … all of those things kind of shape and create the culture that helps allow or disallow those pieces.”

The trio tapped a diverse advisory board including labor advocates, restaurant owners, and former Food & Wine editor Dana Cowin, and put out a request for proposals and participants in August. A selection committee that included restaurateur Ellen Yin and Equity at the Table founder Julia Turshen reviewed 39 proposals, selecting only a handful to be workshopped at the Sprint.

About five years ago, while working as the dining room manager and as the beer director at Eleven Madison Park in Manhattan, Sarah Jane Curran was struggling with mental health. She had a difficult time finding a therapist who could accommodate her schedule and accept her insurance. “Finally I find a therapist and she’s so unfamiliar with the industry,” Curran said in phone interview after the Sprint. “She was convinced that if I just found a job that didn’t get me out of work at 1:30 in the morning, I’d be totally fine.” It was a frustrating sentiment for anyone who understands the time demands of working in a restaurant.

On Monday morning, after introductions and a meditation on what an ideal workplace in the industry might look like, Curran presented her idea for a concierge mental health service and an easily searchable database called Pickup. As Emery Whalen, a restaurateur from New Orleans, walked the group through different stages of ideation and problem solving, attendees offered support and raised ideas and concerns.

Priscilla Mota-Willis, who works with New York-based organization Drive Change, which helps formerly incarcerated young adults find employment in restaurants, offered suggestions to make the service accessible to communities where mental health support may be stigmatized. Others suggested a FAQ for what one might experience during an appointment with a therapist, subcontracting work to an existing hotline was floated, and a survey to ask industry members what help they would benefit from was proposed.

By the end of the day, the proposal morphed into a searchable website of mental health resources geared toward those in the industry, designed to give users the experience of being taken care of like a diner would be at a high-end restaurant.

On the opposite end of the room, another team worked on Sophia Brittan’s proposal for a poster focused on sexual harassment — perhaps one that the Department of Health would require restaurants to post, like the “Employees must wash hands before returning to work” sign. Through group discussion, the team decided “early on, we didn’t want any government agency to be involved,” Brittan said. A pre-existing tension between restaurants and the DOH — coupled by a fear of government inspection for undocumented workers in the industry — helped drive that decision.

During the workshop, two posters were discussed, one aimed at creating a safer space and another at “giving people the knowledge of what sexual harassment is and giving them the vocabulary to understand what are the things they can report,” Brittan said during the end-of-day presentation.

By the afternoon, the solution transformed into a graphic poster featuring images of a wide r of people who might work in a restaurant demonstrating examples of what defines inappropriate behavior and offering examples of supportive, positive behavior to reinforce.

The group also proposed a grassroots sticker or poster campaign around the city focusing on the phrase “We Are Powerful,” with a QR code or URL linking to a webpage with resources and definitions of what being powerful and acting in this context looks like. “You need more than one approach to empower people to make spaces safe,” Ashtin Berry, a New Orleans-based food and beverage activist and a member of the poster team, said.

How salary transparency can help all

Earlier this year, chef and social activist Tunde Wey opened a pop-up in New Orleans serving Nigerian food priced at $12 a plate. White customers were asked to pay $30, to reflect the income disparity between white and African-American households in New Orleans. Borrowing from that idea, Naz Riahi, the founder of Bitten, submitted a proposal for a system that would embolden “women and women of color to start demanding that they get paid more than men and white men based on historical data,” she explained in a follow-up call. Additionally, she envisioned women vowing to refuse to work for companies who wouldn’t accept these terms.

“I knew that this is not a realistic thing that can be implemented on a large scale. It was a radical, experimental idea,” she added. Still, her group workshopped the proposal. Throughout the day they returned to the core need for individuals to share their salary — with friends, colleagues and anyone who asks. Toward the end of the Sprint, every member of her group shared their salary in an emotional conversation that had several in tears. “It was far more powerful than I ever believed it could be,” she said.

Toward the end of the Sprint, every member of her group shared their salary in an emotional conversation that had several in tears.

From the discussions, the group created a covenant to end wage disparity including statements such as “no employee shall be inhibited from sharing wage information,” and five questions to ask during an interview, including “what is the primary reason people leave? Is wage a factor?”

The working parents group workshopped how to revive and expand a program in Toronto run through a now-shuttered restaurant called the Dinette to support young working mothers in the industry. And there were other solutions proposed across the room to help build mentor programs and improve financial literacy.

What’s next for the restaurant industry?

At the start of the day, Fairbanks explained to the room, “We’re not going to solve all these issues today.” Rather, she and WiHU are “working on a generational timeline.” Before the Sprint, Fairbanks envisioned success as one or two of the projects existing in earnest a year or two later.

For Brittan, Curran and Riahi, there are tangible next steps including seeking design and legal assistance, identifying volunteers, six-month and 12-month check-ins scheduled with their team and hopefully collaborating with WiHU.

For the WiHU leadership, the goal in the next six weeks is to gain “a sense of what happened at the tables ... and what is the appetite among the team leads for next steps,” Fairbanks says. “I think the route to affect change beyond [the Sprint] will also take a multitude of steps.”

There were other takeaways from the day beyond concrete steps, most notably a palpable sense of momentum. Mota-Willis, from Drive Change, said that the day “gave me hope that there will actually be a movement.”

The biggest takeaway from the day for Curran was a sentiment of a cultural change that occurred in the room. “We’re in this field that’s so hyper competitive, you’re so used to putting head down and hustling. To have the opportunity to work with these people and not have any ego in the room and just get things done, it was pretty amazing.”