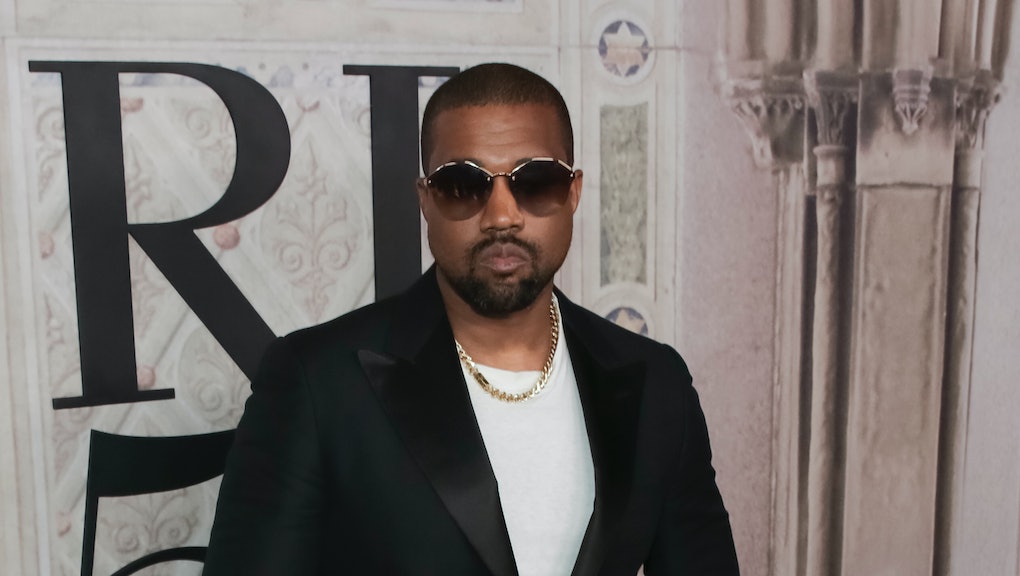 I’d be fine never hearing from Kanye West again, thank you very much

On Saturday, those who can still stomach Kanye West enough to listen to him at length were supposed to be treated to a new album titled Yandhi. The album never surfaced (it’s since been revealed that West will be traveling to Africa to finish the project for a November release), but West managed to dominate the zeitgeist all the same following a bizarre appearance on Saturday Night Live. First, there was the performance of “I Love It,” a collaborative single with Lil Pump.

As someone who until this weekend purposely avoided listening to anything Kanye-related, and am only now hearing the track, I have a few questions. Isn’t Kanye West 41? Isn’t Lil Pump a teenager? Why are they working together? Better yet, how can two men with such a wide age gap manage to produce a collaboration that sounds too immature for both of them?

And why were they dressed like bottles of water? Was it some sort of display of his “genius” that I’m missing? Please advise, Kanyettes.

Somehow, this spectacle managed to be the least embarrassing aspect of West’s last few days. What was truly revolting was West’s reminder that he will seemingly drink the piss of white supremacy and spit it back at us whenever opportunity presents. To wit, check out his pro-Trump remarks delivered at the end of SNL — remarks that were cut off on the telecast but have since quickly spread all over the internet. And then, true to form, West followed Saturday’s idiocy with an encore performance on Twitter, calling for the abolishment of the 13th Amendment in a misguided attempt to comment on America’s prison-industrial complex.

Then on Monday, the rapper talked to TMZ founder Harvey Levin in what amounted to a mess of a conversation where he doubled down on his support of Trump and clarified his points about the 13th Amendment.

“Abolish was the wrong language,” West told Levin on Monday. “I misspoke by saying abolish. Amend was the right language. What’s beautiful about our Constitution is we can amend it... In order to make a freed man a slave, all you have to do is convict him of a crime... There’s people getting paid eight cents a week working for companies that are privately owned. A lot of them are first-time offenders.”

Who knows when Yandhi will actually surface — his wife Kim Kardashian West said it would be released on Black Friday —  but even before SNL, West’s appearance at the Fader on Thursday should’ve given anyone considering giving Kanye West another chance pause. Like on SNL, West donned a Make America Great Again hat while insisting he “redesigned” it.

“I changed the brim, I mean, I changed the shape right here and I put positive energy into the hat,” he said. Exactly what sort of “positive energy” can be infused into a slogan first used by Ronald Reagan, a racist, used again by Pat Buchanan, another racist, and then popularized even further by Donald Trump, the most overtly racist American president in decades?

And he wore this hat with a Colin Kaepernick sweatshirt, which he also claimed to have redesigned. I imagine in the minds of the uninformed, the juxtaposition reinforces the notion of acknowledging “both sides” with the purpose of stoking “dialogue” between those with conflicting political ideologies.

It’s the sort of jargon largely employed by cable news journalists and old, out-of-touch white newspaper columnists who would rather engage in superficial arguments about racism rather than confronting the realities of it. (Notably, the reality of how integral a role racism still plays in society and all those — ahem, them — that are active participants or complicit in it.)

As a result, suckers like Kanye West, who don’t read and do tout willful ignorance with the biggest grin on their faces, think they are saying something when they accessorize a symbol of repression with one conveying resistance. After all, it’s spurring “dialogue,” even if more folks need to understand that it’s perfectly fine to let your stupid stay silent.

Speaking of needless conversation, when he stopped by the Fader, West said that he would have preferred Louis C.K., who admitted to engaging in sexual misconduct, to be the host of the SNL in which he served as musical guest. It’s not totally surprising, given who West will reportedly feature on Yandhi: the deceased rapper XXXTentacion, who was accused of false imprisonment and battery of his pregnant girlfriend, and 6ix9ine, the rapper who pled guilty to three felony counts of sexual misconduct with a child.

West also wrongly told the Fader that there were only 800 slaves in the 1800s (the number is closer to 4 million). Perhaps that’s why he wants to abolish — no wait — “amend” the 13th Amendment. In any event, he claims he would have “run, fought or got killed” if he were a slave. And he mentions on one of Yandhi’s new tracks, “I’m giving up my slave name.”

All of this speaks to what I have written repeatedly over time and what many others have mused themselves: Kanye West was never concerned with equality for all; his focus has been to attain the privilege bestowed to straight rich white men.

As one of the biggest stars of a generation, Kanye West will never truly go away. His name is too big to be ignored — particularly when he refuses to be ignored. He will continue to be outlandish and sling spectacles. Yet, the depth of his desperation — spouting all of this nonsense, working with the likes of XXXTentacion and 6ix9ine — suggests he knows he is creeping toward irrelevance. It’s one thing to be the old man in the club, but it’s another to be the old man in the club hollerin’ about the virtues of Donald Trump.

Try as many might to “focus on the art, not the artist,” there is really no separating the two when it comes to Kanye West. He is the Trump of rap, so if you’re among those still wanting to monetarily support Kanye West, such is your right, but keep his deplorable bars away from me. I could never hear Kanye West again and be perfectly fine.

He has nothing good to say anymore anyway.