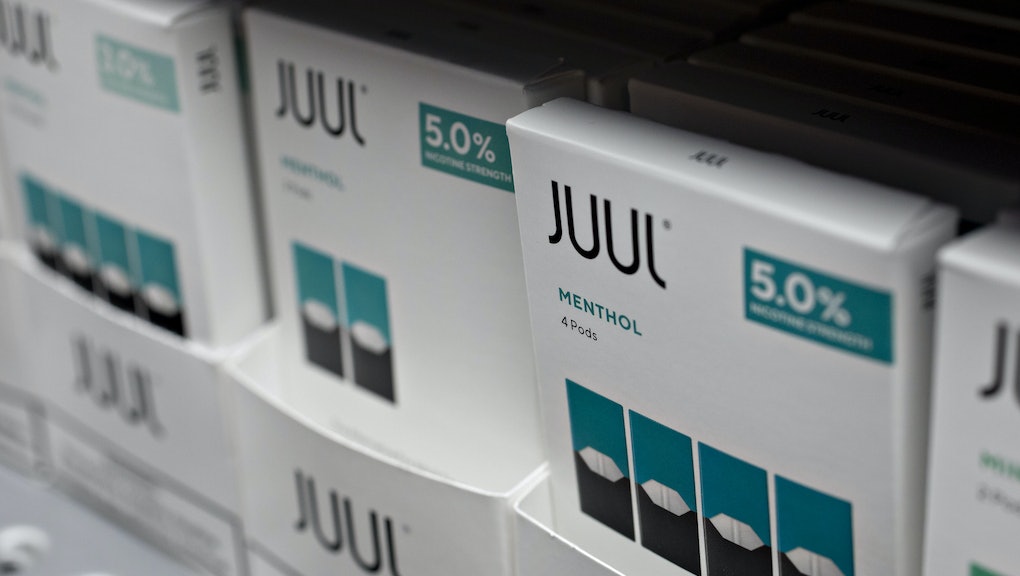 How Juul, the electronic cigarette, won over teens

On Tuesday, CNBC reported the Food and Drug Administration had recently seized thousands of pages of documents from Juul Labs, the San Francisco-based parent company of electronic cigarette Juul. The effort is part of an ongoing crackdown on Juul and other e-cigarettes, which have experienced a meteoric rise in popularity among underage users.

Juul, the rectangular-shaped, battery-powered cigarette, has taken over schools across the nation. According to a survey by the Truth Initiative, nearly one-fifth of middle school and high school students report having seen a Juul used at school. The trend has become so popular, it’s even earned its own verb: “Juuling.” But despite its success, FDA commissioner Scott Gottlieb called the trend of using Juul and e-cigarettes an “epidemic” largely affecting kids, and doctors remain worried about its under-researched health effects.

Why has Juul in particular stirred up so much controversy in so short a time? We take a look at what exactly Juul is, how it managed to captivate young audiences and why the FDA is cracking down on its use.

While traditional cigarette sales slump, electronic cigarettes are on the rise

Contrary to traditional cigarettes, electronic cigarettes don’t contain tobacco. Instead, they have “e-liquids” with the stimulant nicotine in them. (Tobacco naturally contains nicotine). Though there are no long-term studies definitively proving that vaping or electronic smoking is “healthier” than traditional smoking, a 2018 study found that vape smoking often resulted in the inhalation of smaller concentrations of toxic substances, suggesting e-cigs may be a less harmful alternative.

While smoking traditional cigarettes has declined among children and young adults over the past few decades, the e-cigarette market, which includes vape pens, has steadily grown, according to a report by the Centers for Disease Control and Prevention. The rise is driven by factors like marketing tactics aimed at younger audiences, the widespread availability of products and overall price.

Pax Labs (which launched its spin-off, Juul Labs, in 2017) launched Juul in 2015 — designed to “modernize” smoking with its sleek design, which looks similar to a USB flash drive. Each Juulpod, a term for its replaceable cartridge, contains a “proprietary e-liquid formula,” according to Juul’s website, which has benzoic acid, an acid found in tobacco plants, and nicotine content. Customers can purchase Juulpods in 3% or 5% nicotine content, with each pod intended to last around 200 puffs. The e-liquid in a pod is heated using Juul’s metal coil, providing Juul smokers the ability to inhale its vapor. Since 2015, Juul has dominated the electronic cigarette industry, effectively cornering the youth tobacco market.

Juuls are still highly addictive and may even be toxic

According to Ana Maria Rule, an assistant professor at the John Hopkins Bloomberg School of Public Health who has conducted a number of studies surrounding electronic cigarettes, products like Juul come with their own set of health concerns. And despite being marketed as an alternative to traditional cigarettes that could be used to reduce or eliminate consumption entirely, they are still very addictive. “Devices like Juul are still designed to deliver a really high concentration of nicotine and this is one of the main reasons people are getting addicted,” Rule said over the phone.

In fact, a survey by the Truth Initiative found that 63% of Juul users didn’t know the product always contains nicotine — and a standard Juul pod still delivers the same nicotine content as a pack of cigarettes. (A number of Juul users have since filed lawsuits against the company for its alleged deceptive marketing of Juul as a “safer” alternative.) And while Juuls ultimately aren’t that different from other vape devices or electronic cigarettes, they do potentially differ in one significant way; in May, researchers discovered two tested flavors of Juulpods contained more nicotine than nine other vape products tested.

A survey by the Truth Initiative found that 63% of Juul users didn’t know the product always contains nicotine.

But the nicotine itself isn’t the only danger involved with electronic cigarettes. Rule said many electronic cigs contain metal parts which could pose could a variety of long-term health effects. “There’s a metal coil that’s actually in contact with [a] liquid. A person heats that up and inhales it,” she said. “And inhaling metal is especially toxic.”

Rule said during tests of electronic cigarettes, levels of nickel and chromium, components of the metal coil, were detected — but researchers also found levels of lead, arsenic and manganese, a toxic metal that affects the nervous system and can produce symptoms similar to Parkinson’s. “And the concentrations of metal we’ve found aren’t trivial,” she said. “We’ve found them in concentrations at or above the levels that are associated with health effects.”

And these effects could be particularly harmful to adolescents, though research into its long-term effects has yet to be tracked, Rule said. “In general, the brain is still in development. Lead and manganese have neurotoxic effects, so while we don’t know exactly the long-term effect, the younger you are, the more susceptible you are.”

How Juul has targeted young people

In most of the United States, individuals must be at least 18 to purchase a cigarette, electric or not. (A number of states including California and Oregon have recently raised the age to 21.) A study by the National Institute on Drug Abuse found that while traditional cigarette smoking is declining overall, nearly one-fifth of all high school seniors having vaped nicotine in the last year. But according to Robin Koval, president of the Truth Initiative, statistics like these aren’t surprising, given Juul’s past marketing efforts. And while these efforts aren’t illegal, amassing an audience of underage users presents a problem for kids who’ve never smoked and are under the impression Juuls are safer, Koval said.

“If you’re looking to speak to young people, social media is where you go,” Koval said by phone, referencing Juul’s early marketing campaigns in 2016 and 2017 on YouTube, Twitter and Instagram, using influencers and hashtags like #LightsCameraVapor to cultivate a young audience. “And of course, the way modern marketing happens, you get your target audience to do the marketing for you. We’ve seen the many videos on YouTube and all over Instagram of young people basically spreading the word that Juul is cool,” Koval added. “Juul would like us to believe it’s all a big accident, but you don’t build these kinds of businesses and audiences of young people unintentionally.”

And the device markets itself to young users, Koval said, with flavors like mint and mango. The fact that its a discreet device is a bonus, too. “It comes in a very cool, tech-y, easy to conceal format. ... And [it’s] really easy to use in ways that are not detected by parents and teachers. They can basically Juul from the time [they] get up in the morning to the time [they] go to bed because it’s so easy to hide. And that’s really scary, given how addictive it is.”

Why the FDA is stepping in

As part of its regulation of the electronic cigarette industry, the FDA is now forcing manufacturers to submit a review of their products to remain on the market — though they have until 2022 to comply. “The growth in use of e-cigarettes has reached a level that’s shocking,” FDA commissioner Scott Gottlieb said in a statement. “And still, there’s a tiny fraction of people who will still say — so what. They’ll argue that nicotine use by kids is not a big deal if it’s delivered through an e-cigarette. I am here today to say, they’re dead wrong.” A 2016 report by the CDC estimated that 2.4 million high school students and 620,000 middle school students had used e-cigarettes at least once in the past 30 days.

In his statement, Gottlieb announced a Youth Tobacco Prevention Plan, designed to curb access, prevent marketing and increase education, all directed at teens, including more than 1,300 warning letters and fines to brick-and-mortar and online retailers selling Juul to underage users.

Koval believes that while efforts like the latest inspection are positive signs for regulation of the industry, it might not be enough. She said that flavors that largely attract young people should no longer be sold, and stricter enforcement is necessary to prohibit underage people from purchasing Juul products. She also reiterated the importance of education for young people about nicotine’s addictive qualities. “The younger you are when you use it, the harder it will be to stop later on,” she said.

Similarly, Rule added that while studies on electronic cigarettes exist, Juul remains a wildly under-researched area. “The industry ran with [Juul] and we had no idea what was in this device,” she said. “And every time you turned around, there’s a different model, a different generation — the research is just catching up.”