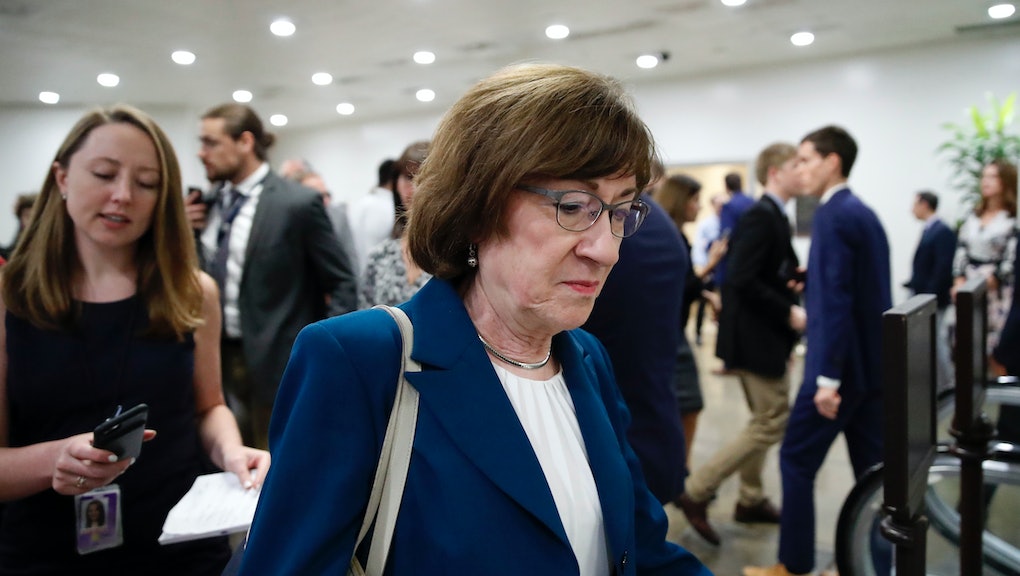 Sen. Susan Collins will vote for Kavanaugh’s nomination, making him all-but-certain for confirmation

Sen. Susan Collins (R-Maine) announced on Friday afternoon that she will vote for Brett Kavanaugh’s nomination, assuring that he will be confirmed to the Supreme Court, despite allegations of sexual assault.

“I do not believe that these charges can fairly prevent Judge Kavanaugh from serving on the court,” Collins said.

After Collins’ announcement that she is pledging her support, Sen. Joe Manchin (D-W.Va.) said that he will also vote yes on Kavanaugh. With the confirmed support of him and Collins, the likely final Senate vote is 51-49.

Collins defended Kavanaugh’s record as a judge on the D.C. Circuit Court and talked about the importance of the “presumption of innocence.” She also said that while she believed Christine Blasey Ford was a victim of trauma, she cast doubt on Ford’s story.

“I listened carefully to Christine Blasey Ford’s testimony,” Collins said. “I found her testimony to be sincere, painful and compelling. I believe that she is a survivor of a sexual assault and that this trauma has upended her life. Nevertheless, the four witnesses she named could not corroborate any of the events of that evening gathering where she says the assault occurred, none of the individuals professor Ford says were at the party has any recollection at all of that night.”

Collins’ speech was immediately interrupted by protesters in the Senate gallery, who chanted “vote no,” indicative of the immense pressure she faced to oppose Kavanaugh’s nomination. But her speech sounded like someone who had her mind made up long before she announced her decision.

The announcement comes hours after the Senate voted to advance Kavanaugh’s nomination, setting him up for an up-or-down vote that could come as early as Saturday afternoon. Kavanaugh’s nomination was advanced on a 51-49 vote, with GOP Sen. Lisa Murkowski of Alaska voting no, but Manchin voting yes.

The Senate, for its part, could vote on Kavanaugh’s nomination as early as Saturday afternoon.