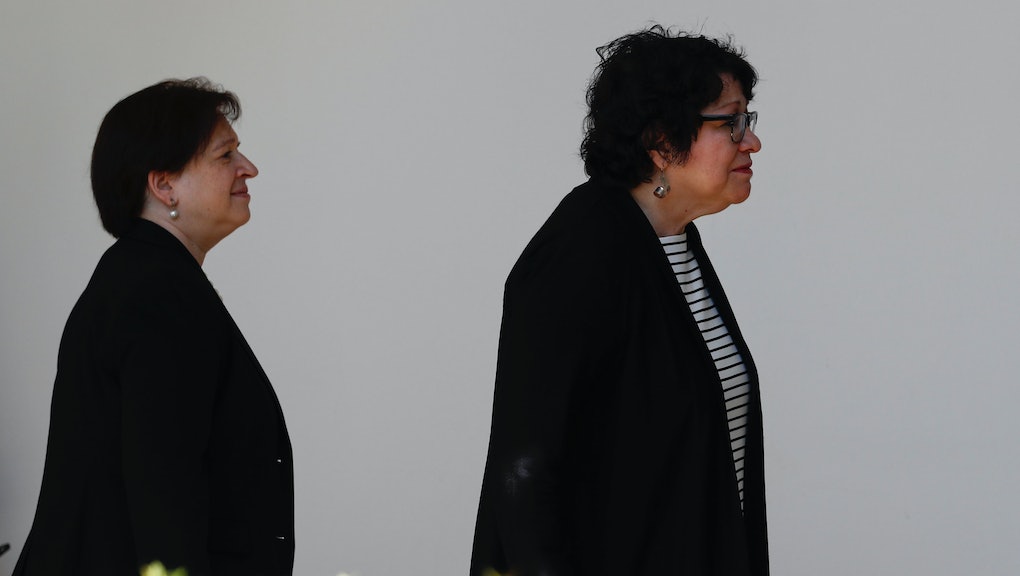 Justices Sotomayor, Kagan warn against “politicization” of the Supreme Court

“This is a really divided time,” Kagan said during a question-and-answer session at the university. “Part of the court’s strength, and part of the court’s legitimacy, depends on people not seeing the court in the way that people see the rest of the governing structures of this country now.”

It’s important for Americans to see the court “not as an extension of politics,” Kagan said, but “above the fray.”

The comments came on the eve of the Senate’s expected final vote on Supreme Court nominee Brett Kavanaugh, who has made a number of blatantly partisan statements during his contentious confirmation process.

During a hearing last month on the sexual assault allegations that have been leveled against him, Kavanaugh claimed — without evidence — that the accusations were a “political hit” by Democrats to exact “revenge on behalf of the Clintons” and repeatedly lashed out at Democrats on the Senate Judiciary Committee as they questioned him.

He is expected to be confirmed Saturday in a largely party-line vote.

Kagan and Sotomayor did not directly address the acrimonious Kavanaugh confirmation process in their talk at Princeton Friday, but called for the court to “guard its reputation of being impartial.”

“All of us need to be aware of that — every single one of us — and to realize how precious the court’s legitimacy is,” Kagan said.

According to Sotomayor, the politicization of the court has been going on for years as “political parties have adopted the academic discussions” judges were having about how best to interpret the Constitution.

“I think that that institution has hurt the court a lot, and may continue to do so,” Sotomayor said.

Kavanaugh was nominated by President Donald Trump in July to replace retired Associate Justice Anthony Kennedy. Trump had picked him from a list of potential nominees who had been vetted by the conservative Federalist Society.

He appeared poised to be confirmed after days of wild confirmation hearings in early September, but his future was thrown into doubt when psychology professor Christine Blasey Ford’s sexual assault allegations against the judge surfaced in the New Yorker and Washington Post weeks later.

In an emotionally charged hearing Sept. 27, Ford testified that a drunken Kavanaugh had forced himself on her at a gathering when they were teenagers in the early 1980s. Kavanaugh strongly denied the allegations later in the hearing, calling the hearing a “circus” and sparring with Democrats as they questioned him about his drinking and character.

While Trump ardently defended Kavanaugh throughout the process, he initially showed uncharacteristic restraint in his remarks about Ford. But he has since gone on to question her credibility on Twitter and to openly mock her at a campaign rally — a move Ford’s lawyer said she found “very hurtful.”

The judge passed through a procedural vote on Friday and is expected to be narrowly confirmed on Saturday.