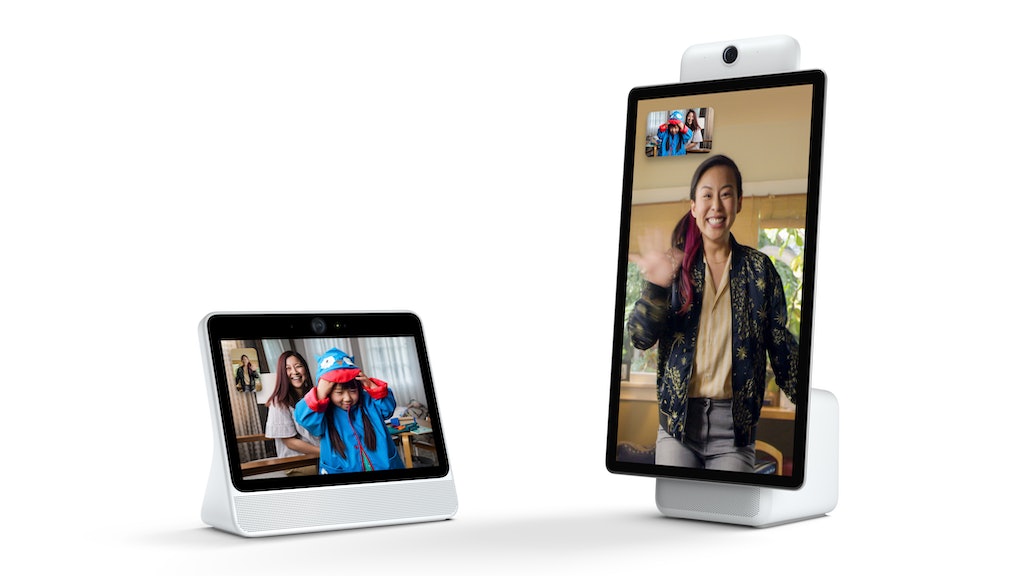 Facebook introduces Portal and Portal+, its video-chatting devices for your home

On Monday, Facebook introduced its new Portal and Portal+ products; the devices can be used to video-chat with Facebook friends or query Amazon’s Alexa virtual assistant. The prices start at $199.

The two devices — one with a 10.1-inch screen, the other a 15.6-inch screen — will let you watch video on platforms like Facebook Watch and Food Network, and play music with services like Spotify or iHeart Radio. The big feature, however, is the video chatting service. Facebook’s Portal allows you to call others using Facebook Messenger. In its promo video of the device, Facebook shows how, if one subject onscreen is moving, the Portal will pan the video to follow the moving person. In addition, video users can apply augmented reality face filters, similar to what we’ve seen on Snapchat and Instagram.

The largest device can rotate 90 degrees to switch to portrait mode.

The inclusion of Alexa extends the Portal’s capabilities even more. Users can query the Amazon assistant to learn about the current weather, sports scores, control their smart devices and more.

A Bloomberg report in March revealed that Facebook delayed the announcement of “connected speakers with digital-assistant and video-chat capabilities,” due to the company’s data scandals. The backdrop of Portal’s official reveal isn’t much better: 10 days prior, Facebook admitted that hackers had access to 50 million user accounts.

Facebook has created built-in privacy features for the Portal device. It ships with a camera cover, in hopes of removing any worry that the company is looking when it shouldn’t be. Facebook also assures that the device isn’t using any facial recognition to identify you and uploading it to Facebook servers. For privacy among those you live with, Portal owners can set a passcode for their device.

Other Portal features may worry those users who are concerned about their privacy. One feature, called Home and Away, will use your mobile phone to tell Portal, and Facebook, when you’re not home. Home and Away is off by default, according to Facebook. Additionally, the long-running urban myth that Facebook is listening to you is finally true — the Portal features an always-on microphone, waiting for you to say, “Hey Portal.” According to Facebook, only the audio that follows the trigger phrase will be uploaded to their servers.

The company also emphasizes that it “doesn’t listen to, view or keep the contents of your Portal video calls” and notes that the content of your calls are encrypted. The company doesn’t mention anything about storing other information about the call, like who you’re calling and how long calls lasted, which Facebook has done in the past. In March, Android users discovered that the company had been storing this information as well as text messages.

In a statement sent to Mic, Facebook reiterated that it doesn’t view or keep the content of phone calls, nor does it use the content of a call to serve ads.

Facebook Portal is $199, around the same price as similar products

The smaller Portal will cost $199 while the larger one will go for $349, both available to pre-order on Monday. Facebook offers a two-pack of the smaller Portals for $298.

The prices are in line with competing devices. A Google Assistant-touting smart display from Lenovo, for example, can be purchased at $199.99. Amazon’s 10-inch Echo Show device is available for $229.99 and, like the Portal, has Alexa built-in. Most recently, Amazon announced 70 Alexa-supporting products at its September event, including smart plugs, clocks and microwaves.