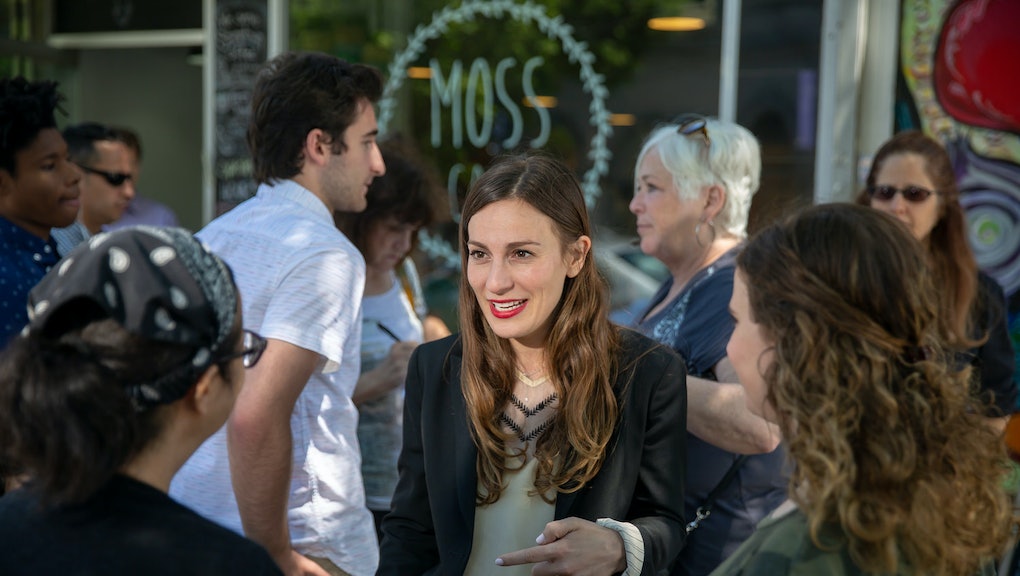 After bringing down New York’s “intolerable” Democrats, Alessandra Biaggi plans her next moves

What Alessandra Biaggi saw was, in her own words, intolerable.

The Independent Democratic Conference, a group of rogue New York Democrats, had broken away from the greater Democratic party and, since 2011, had been caucusing with Republicans, giving them majority control of the New York’s state Senate. So this year, Biaggi ran an insurgent campaign. And on Sept. 13, she defeated long-time incumbent and IDC head Jeff Klein to become the Democratic candidate for New York state Senate District 34. On that primary night, six of the eight IDC members lost their re-election bids to a wave of progressive challengers.

“This is because of every single one of you who were courageous, who saw a vision as well, who knew that we could not tolerate Democrats who would be empowering Republicans, that that was intolerable,” Biaggi said in her victory speech. “And we have now cut the head off the IDC snake.”

In Biaggi’s view, the IDC lost in September because they did not govern in a way that reflected the views or priorities of their own constituents. She says that’s precisely this that inspired her to get into the race.

“I’m 32 years old, I have a lot of student loan debt, I’m fourth generation in District 34, and I would like to remain in District 34, but the prices for rent and home ownership have skyrocketed in a way that makes it almost impossible,” she told Mic in an interview. “All of this coming together allowed me to realize: Not only do I not agree with IDC because it’s the antithesis of everything I believe in as a Democrat and as a progressive, but the way that it’s currently being run is out of touch with needs of voters.”

Biaggi was born and raised in the district she is now poised to represent. She attended public schools in Pelham, New York, and then earned her bachelor’s from New York University, and her law degree from Fordham Law School. She also graduated from the Women’s Campaign School at Yale University.

Biaggi entered the race with experience in both government and campaigns, having done storm recovery work for the New York state government from 2014 to 2015. From there she served as the deputy national operations director for Hillary Clinton’s 2016 presidential campaign from 2015 to 2016, then worked in Gov. Andrew Cuomo’s counsel’s office from 2016 to 2017. In the governor’s counsel’s office, she said she specifically advocated for the Reproductive Health Act. When she realized the challenges this act was up against, it cemented her desire to run.

Her primary victory was perhaps a result of her campaign’s on-the-ground effort to promote her progressive platform, while also explaining the IDC to constituents and convincing them that it’s time for its members to be voted out. To accomplish this, Biaggi, her staff, and more than 500 volunteers did door-to-door canvassing, mailers, digital ads, events with other local candidates, postcard writing and phone calls.

“I feel like I haven’t slept in years,” she joked. But these constant grassroots efforts allowed her campaign to win when she only raised about $500,000. Her opponent spent over $2.4 million.

A few weeks after the primary, Biaggi said the IDC’s mere existence in the first place serves as a warning of the perils of Albany politics, where she said she feels money rules, and for the worse.

“Money drives campaigns, and it’s what allows people to get re-elected, but it’s also the thing that allows people to get corrupted,” she said. “One of the ideas that’s really important to myself and the other anti-IDC candidates is campaign finance reform. Because it’s so easy to just say, ‘Oh I’ll take, money from this group but I won’t be influenced by them.’ It’s almost impossible to not be influenced by who gives you money.”

In addition to campaign finance reform, Biaggi said her immediate focus will be on passing the Reproductive Health Act (which would codify Roe v. Wade into law), creating stronger rent laws to protect tenants from real estate developers and landlords, ensuring public schools are fully funded and ensuring the New York State Health Act — which would provide New Yorkers with universal health care — makes it out of committee. That way, voters will know which members are voting yes, and which are voting no.

In a New York state primary election cycle that was overshadowed by actress and activist Cynthia Nixon was challenging Gov. Andrew Cuomo from the left, Biaggi’s candidacy in many ways blended an ultra-progressive policy platform and grassroots support with experience of working in government for more establishment politicians. She ran on a platform that included decriminalizing sex work, ending cash bail and implementing single-payer health care. Her experiences in Cuomo’s counsel’s office and her role in Clinton’s 2016 campaign reflect her establishment experience.

Biaggi said her it’s her prior experience of working inside the offices of such establishment politicians that allowed her to better understand where she stood with respect to many policies.

“You can work for a Democrat, but what does that really mean at end of day? Every single principle has a different set of values, platform and ideals,” Biaggi said. “But, working for the principles that I worked for allowed me to understand not only how the system works, but where I stood on certain issues, and where I would have pushed harder, or not as hard. That was critical to my development not only as a Democrat, but also as a candidate.”

Biaggi’s background was also reflected in her endorsements. She was endorsed by Alexandria Ocasio-Cortez, the 28-year-old Bernie Sanders-organizer-turned-Congressional-candidate who has been a national political figure since she toppled 10-term incumbent Joe Crowley in June. The congressional district that Ocasio-Cortez hopes to represent after her November general election overlaps with parts of the state Senate district Biaggi is running to represent.

Biaggi described Ocasio-Cortez as a friend, and said she was honored to have her endorsement. Ocasio-Cortez even accompanied Biaggi in canvassing the overlaps of their districts, on occasion.

On the establishment side, Biaggi was also endorsed by New York Sen. Kirsten Gillibrand, and the New York Times.

Biaggi said she looks forward to fighting for the same types of progressive legislation, ranging from campaign finance reform to protecting women’s reproductive freedom, on a state level that Sen. Gillibrand is currently fighting for in the Senate, and that Ocasio-Cortez will be fighting for the in the House.

“I think one of the reasons that a lot of people get frustrated by politics is because they find that their elected officials are simply not honest.”

Though Biaggi still has to defeat Republican Richard Ribustello in November, her path to victory looks breezy. The New York State Board of Elections figures show active registered Democrats in the 34th District outnumbering registered Republicans 5-to-1. Now, Biaggi has time to anticipate the role she would play in Albany.

“I’m not afraid to call things out for what they are, and I hope to continue to be a voice that speaks truth to power, not in an abstract way but in a very real way,” she said. “I think one of the reasons that a lot of people get frustrated by politics is because they find that their elected officials are simply not honest. I don’t mean that they’re necessarily hiding something, but more that they refuse to answer questions about things that are so blatantly clear, but they avoid being honest because they’re afraid.”

She says she hopes her victory will also inspire more people to run for public office.

“So many young people, and women, and women of color, and individuals of color, are kept out of the process in a way that harms all of us,” she said. “If I can share my story in a way that helps other people break down a barrier for entry, I will do that.”

Once in office, she hopes to make it easier for other people to run, as well.

Biaggi recalls how difficult it was for her, even as a lawyer who has worked in government and on campaigns, to figure out exactly which forms she needed to complete to declare her candidacy. Making sure people don’t feel discouraged by the process, but rather, find it accessible, is another one of her top priorities.

“I also want to make sure we’re encouraging new people to run, and not only getting behind anointed establishment candidates,” she said. “There are so many people in this world who would be excellent leaders, and we need them. We are in desperate need of leaders with authenticity and high integrity. One of the ways we’re going to get there is by sharing our story of how we won.”