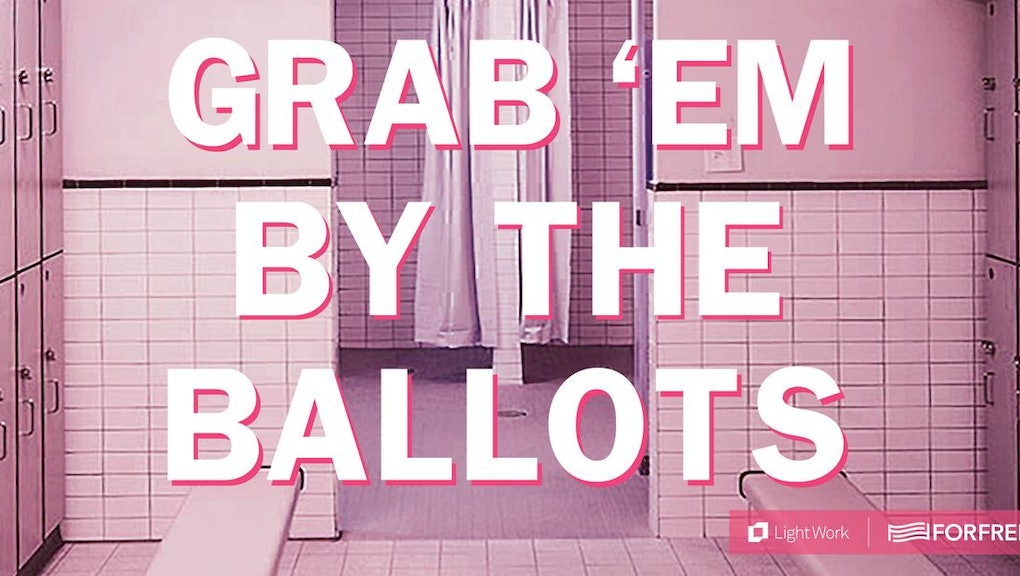 For Freedoms, a civic engagement platform for artists, is launching the 50 State Initiative to stir public discourse via more than 50 thought-provoking billboards across the country ahead of the midterm elections in November.

In October, the organization began rolling out 52 billboards — one in each state, Washington, D.C., and Puerto Rico, that speak to issues that define the current American sociopolitical climate. The project is an “anti-partisan” effort that chooses to focus on the issues rather supporting specific political parties.

“One major problem we confront is the binary nature of arguments on political issues,” Mark Skidmore, For Freedoms political adviser, said in a statement. “We are not for or against. We are for everything in between. For Freedoms is trying to grapple with the problem of exclusion and exclusivity. We believe art is a civic catalyst. That means we are welcoming, inclusive and open to all, and believe everyone should have an equal seat at the table.”

For instance, one billboard designed by Brooklyn-based artist Shaun Leonardo states that if Trayvon Martin were alive today, he would be of voting age. “Trayvon Martin … would have been 23 years old … could have voted.”

Another billboard designed by artist J.R. has an image of a dinner party being held at a long table at the Mexico/U.S. border, as a way to call attention to the issue of immigration.

Here is a look at 12 more billboards from the 50 States Initiative.

“There’s no way like the American Way” by Eric Gottesman, Alabama

“Grab ‘Em by the Ballots” by Zoë Buckman, New York

“Every Refugee Boat is a Mayflower” by Christopher Myers, Maine

“True peace is not merely the absence of tension, it is the presence of justice,” by Martin Luther King; Equal Justice Initiative, Virginia

“Freedom Is Not Guaranteed” by Xaviera Simmons, South Dakota

Several of the billboards were funded through Kickstarter and many were curated in collaboration with partner institutions including the Virginia Museum of Contemporary Art, Brother Rutter and the Baltimore Museum of Art, and more.

The unveiling of the 50 State Initiative is part of a number of activations that For Freedoms is carrying out prior to Election Day. For example, in September, the Birmingham Museum of Art launched an exhibit focusing on the civil rights era and the current political climate. Visitors will also be allowed to register to vote on site. On Oct. 11, the museum is hosting a community-focused town hall to further civic engagement.

“The goal is to encourage dialogue across partisan lines and fundamentally challenge partisanship itself,” Emma Nuzzo, For Freedom’s programs manager, said in a statement. “With our partners, we are exploring the role of arts institutions and artists in connecting with and mobilizing their local communities.”