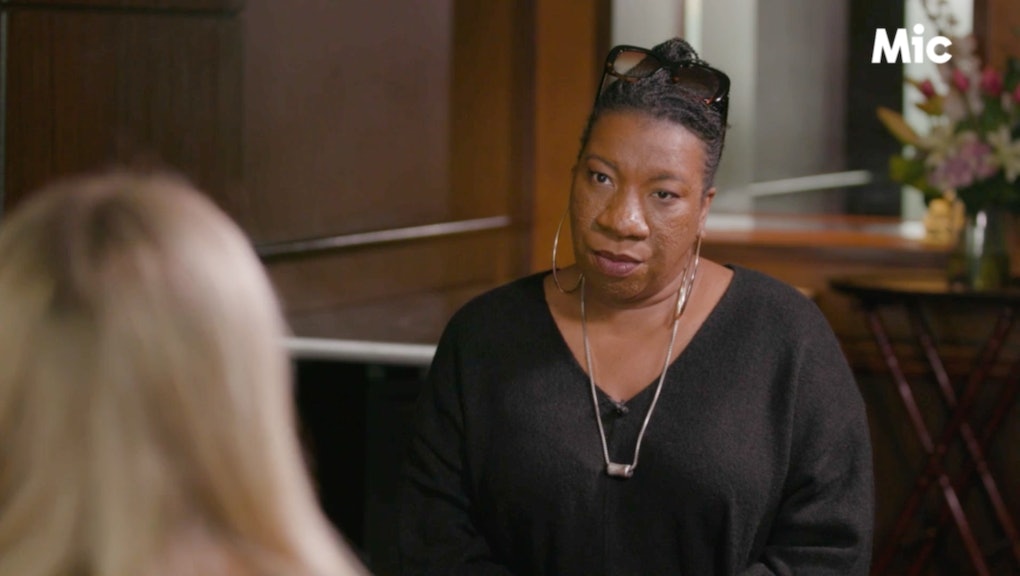 On this episode of Mic Dispatch, correspondent Kendall Ciesemier visits Los Angeles to speak with activist Tarana Burke, the founder of the #MeToo movement. Burke discusses the movement at large, the controversial confirmation of Supreme Court Justice Brett Kavanaugh and whether or not and when to give accused sexual assailants second chances.

Burke: People have weaponized #MeToo. It’s not a weapon; it’s a tool. Like, “Look what #MeToo has done” or “Look who’s been #MeToo’d.” Like, that kind of narrative keeps getting pushed out with no context. And it’s been defined largely in pop culture and through mainstream media as a witch hunt.

Sen. Mitch McConnell: This has been the most outrageous search-and-destroy mission.

Sen. Mazie Hirono: I just want to say to the men in this country: Just shut up and step up.

Ciesemier: And whose fault would you say that is? Is it the media’s fault? Is it politicians’ fault?

Burke: I’d say it’s a combination. What we’ve seen over the last year is the definition of what this movement is be expanded in ways that are not helpful to the actual movement.

Ciesemier (voiceover): It’s been one year since sexual assault allegations came out against Harvey Weinstein.

Ciesemier (voiceover): When Alyssa Milano tweeted out her own story of sexual assault, it sparked millions of survivors to share their stories with the hashtag “MeToo.”

George Stephanopoulos, Good Morning America: The #MeToo movement, it is growing this morning.

Carole MacNeil, CBC: Thousands of women are using two words on social media to identify themselves as survivors of sexual harassment and assault.

Ciesemier (voiceover): The original founder of #MeToo, Tarana Burke, says the movement she initially started in 2006 has been misconstrued — and she blames Republicans, Democrats and the media.

Ciesemier (voiceover): Most recently, the #MeToo conversation has narrowed in on the Supreme Court hearing. Professor Christine Blasey Ford shared allegations that she was sexually assaulted by Judge Brett Kavanaugh.

Ciesemier: So Kavanaugh has been confirmed. Now what?

Burke: Kavanaugh being confirmed doesn’t change the reality of what sexual violence is in this country. We need to hold the people who appointed him accountable for appointing him and so, you know, election season’s coming and we need to remember that.

Ciesemier (voiceover): Burke was in the room during Ford’s testimony.

Christina Blasey Ford: Brett put his hand over my mouth to stop me from yelling. This is what terrified me the most has had the most lasting impact on my life. It was hard for me to breathe, and I thought that Brett was accidentally going to kill me.

Brett Kavanaugh, Supreme Court associate justice: I categorically and unequivocally deny the allegation against me by Dr. Ford.

Burke: There was something very different and extra heavy about that experience. Part of it was listening to her recount her story — something that’s so deeply personal in such a public way in a space that wasn’t 100% supportive.

Ciesemier: When you were watching the Kavanaugh hearings, was there any part of you thinking about how we talked about Anita Hill?

Anita Hill: He spoke about acts that he had seen in pornographic films involving such matters as women having sex with animals and films showing group sex or rape scenes. On several occasions, Thomas told me graphically of his own sexual prowess. My efforts to change the subject were rarely successful.

Clarence Thomas: I deny each and every single allegation against me today.

Burke: There was even conversation afterward about how Dr. Blasey Ford came across vulnerable and approachable, where Professor Hill came across as stoic and hard in her testimony, and it’s like, we cannot win. And regardless, this woman bravely came forward. There would be no Dr. Blasey Ford if Anita Hill didn’t do what she did. While I don’t believe that the attention that Dr. Blasey Ford is getting is solely because she’s white and Anita Hill was black, I think it’s the difference in time, I think it’s this movement, I think it’s a lot of other factors. It’s still that, regardless of what happens, there’s a different kind of space made for white women. We don’t believe black girls in the same way. We have a hard time believing girls, period, but it’s like, there’s a hierarchy for sure.

Ciesemier: Do you think that white women have been largely the focus of the #MeToo movement?

Ciesemier: Are you at all concerned about the kind of weaponization, the political weaponry that #MeToo seems like it’s become, especially in the Kavanaugh hearing?

Burke: Yeah, I feel like they’re both doing it wrong.

Burke: “Believe women” or “believe survivors” is not just like, “Believe us at all costs, don’t investigate,” you know, “If I say it, it’s true.” It is — let’s start with a premise that people aren’t lying and at least give them the respect of interrogating what they’re saying. The most respectful thing that you can do in a case like this is to do a thorough investigation, listen to both sides, get all the information, do a thorough investigation of the facts that were presented and the statements that were presented and then come to a conclusion. That’s what fairness looks like.

Ciesemier: Your suggestion is that your movement isn’t — you’re not trying to ruin men’s lives.

Burke: That’s ridiculous. I’ve not met many women at all, if any, who come out and say, “I want to take down these men.” They are more concerned about having opportunities to come forward and making sure that it doesn’t happen to somebody else than they are about taking somebody down. Most survivors don’t think punitively, and I think the problem is that we’re stuck in an idea that this is about guilt and innocence, and this is not always about just guilt and innocence. We need to think of this in terms of harm and harm reduction.

Ciesemier: But now that we’ve seen these media men, men of Hollywood be exposed, what kind of restorative justice process should we have?

Burke: I don’t want to talk about that. Let me tell you why. Every single time we have this conversation, it is — we are one year in. We are already in a conversation about, “How can these men get their lives back? Is there a place for them?”

Stephen Colbert, The Late Show With Stephen Colbert: A number of people believe it’s time to forgive and forget. Those people? The men.

Entertainment Tonight clip: A source tells ET that Matt Lauer is still hoping for a comeback.

Burke: There’s a conversation to be had about restoration for perpetrators, and it is a part as inherent in this whole conversation about the movement, but I just cannot have another conversation about, “Can Louis C.K. tell jokes again?” until we have a conversation about every single one of those millions of people who raised their hand. How do we have a situation where you have, in a 48-hour period, multiple millions of people say, “This happened to me too,” and there’s no response to that? Taking responsibility doesn’t mean like, “OK, yeah, I might’ve done it.” It’s just like, apologies, they need to be attached to action. If you’re gonna apologize and take responsibility, I need to understand what the action is going to be attached to that.

Ciesemier (voiceover): Now that an astounding number of people have said “#MeToo,” Burke told me her focus has turned to working to provide social and financial resources to survivors both on and offline.

Ciesemier: What is your advice to survivors on how to handle the continuation of what #MeToo will become?

Burke: I want us to lay our burdens down. This should be laid at the feet of the Senate. This should be laid at the feet of your local politicians. It should be laid at the feet of the school or institution or whoever that didn’t protect you. It’s not our burden to bear. And so now our work is bringing those people resources, and I’ve been working as much as I’ve been out in the world talking and moving and trying to get people to shift the narrative around #MeToo. I’ve also been working with a small and mighty team of folks to get the resources that we need. A lot of resources have not moved into the work of ending sexual violence. These last two weeks of watching Kavanaugh, watching the president of the United States mock a survivor of sexual violence, you know, watching this woman come forward and tell her story in a hostile environment, has been difficult. And so we need to take a breath, we need to take a step back, we need to remember that it’s not our burden to bear. The thing that happened is the curse, but it’s yours to hold. Everybody doesn’t deserve to hear your story. They don’t deserve your #MeToo. And you don’t have to say it to be a part of this movement.

Check out episode 25 of Mic Dispatch — only on Facebook Watch.