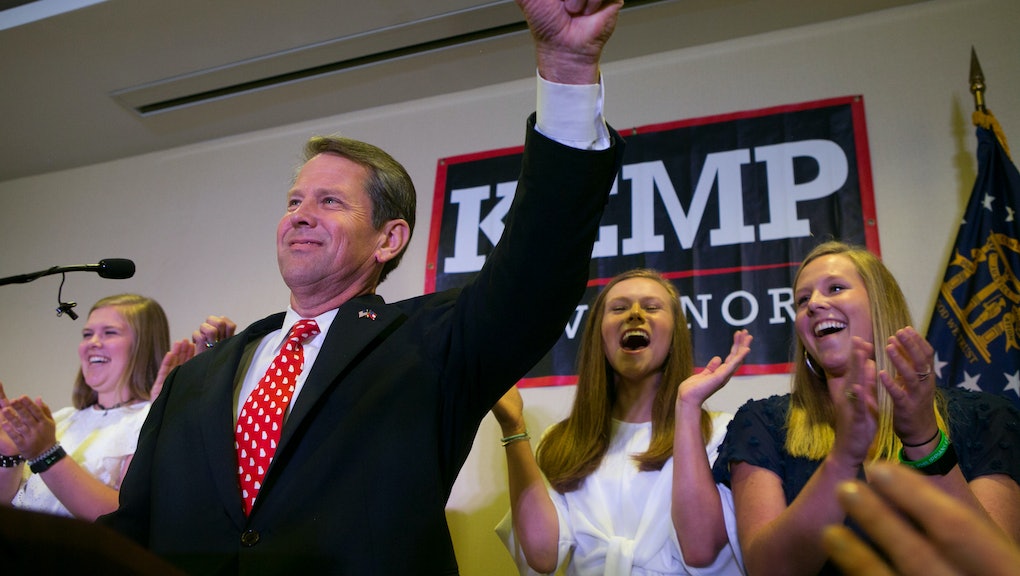 This is the precise reason journalist Greg Palast began an investigation into the purged names for news outlets Al Jazeera and Rolling Stone back in 2014. On Tuesday — the last day to register to vote in Georgia — Palast was frantically warning those voters who have been unenrolled about their status.

In an interview with Slate, Palast said after years of stonewalling and following a 90-day notice threatening a federal lawsuit had been mailed out, Kemp did finally supply him with the list of voters who had been purged from the rolls — a list that contained approximately 750,000 names. Though the law requires voters to be notified if their names are dropped, Palast’s investigation concluded the protocol had not been followed.

“Basically everyone here is what we call ‘purge by postcard’ victims,” Palast told Slate. “They missed an election, they got a postcard to confirm their address, they didn’t send back the postcard, they missed, say, the 2014 and 2016 elections, they were cancelled without further notice on the grounds that that was evidence that they had moved.”

“All these cancellations, by the way, were in 2017,” he added. “You have to understand: 1 in 10 Georgia voters were cancelled in a single year.”

On Palast’s personal website, voters who are unsure whether or not they’ve been purged can search their names and, if necessary, re-register. But the tight deadline all but ensures some Georgia residents will be effectively barred from voting in what has become a nail-biter of a gubernatorial election on Nov. 6.

In his quest to become Georgia’s next head of state, Kemp is facing off against progressive challenger Stacey Abrams, the first black woman major party nominee for governor nationwide.

In his interview with Salon, Palast noted that of the roughly 750,000 voters whose names were purged, around 200,000 of those cases were for legitimate reasons — “people have left the state, have died or have moved out of their congressional district that we’re fairly certain of, or have been imprisoned and can’t vote in Georgia. They’re definitely legitimate cancellations from the voter rolls, no question.”

But while some of the voters who were caught up in Kemp’s dragnet did legitimately deserve to be purged, many others, Palast cautioned, had been stripped of their democratic rights without cause.

“What we are finding is that he has conducted an illegitimate process and which seems to be furthering his interests in running for governor as a Republican against [Democratic candidate] Stacey Abrams, who would become the first black female governor in America if she wins,” he told Slate.