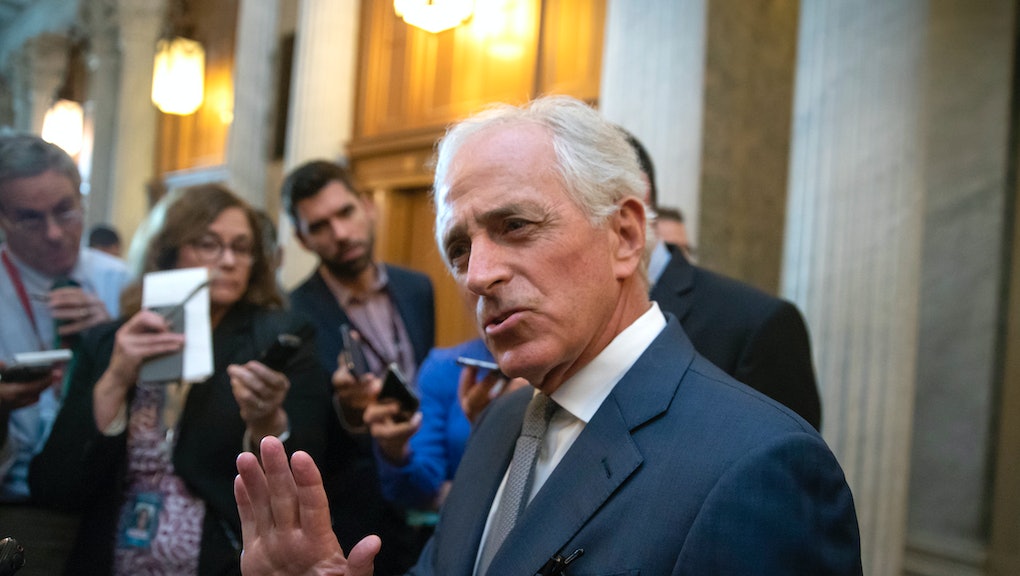 As President Donald Trump continues to offer a tempered response to Saudi Arabia’s alleged murder of Washington Post journalist and Saudi dissident Jamal Khashoggi, his Republican colleagues in the Senate broke with the president Sunday to condemn the Saudi Arabian response and the crown prince’s potential involvement.

Trump has been criticized for his response to Khashoggi’s killing at the Saudi Arabian consulate in Istanbul. The Saudi Arabian government alleges Khashoggi’s death was the result of a fistfight that got out of hand, though it is widely suspected the killing was directed by Saudi Crown Prince Mohammed bin Salman.

Trump has largely sided with the Saudi government, appearing to accept their initial explanations that they did not kill Khashoggi, and then stating he believed the fistfight story was “credible.” In an interview with the Washington Post on Saturday, Trump did say the Saudi’s shifting stories about Khashoggi’s death were “all over the place,” but continued to praise the crown prince, calling him “a strong person, he has very good control.”

In interviews Sunday on CNN’s State of the Union and Meet the Press, however, his Republican colleagues in the Senate offered a different view. Sen. Bob Corker (R-Tenn.), who heads the Senate Foreign Relations Committee, said in an interview on CNN that the Saudi Arabian explanation for Khashoggi’s death was “just not credible.”

“[The Saudis have] lost all credibility as it relates to explaining what has happened ... I don’t think anybody believes that story,” Corker said Sunday. “Everybody can say what they wish, but it’s just not a credible story for someone to walk in with 15 other people and get into a fistfight and lose their life.”

While he said an investigation still has to be done, Corker added he believes the crown prince was behind the killing.

“I’m not rushing to judgement,” Corker later added. “Do I think he did it? Yes, I think he did it. Let’s finish this investigation, we have the best in the world at being able to do that. ... My guess is at the end of the day, the U.S. and the rest of the world will believe fully that he did it. We’ll see.”

Sen. Thom Tillis (R-N.C.) echoed Corker’s views. When asked Sunday on Meet the Press if there was any part of the Saudi explanation for Khashoggi’s death that he found credible, Tillis said, “No, not at this point.”

Tillis then said it “looks like” the crown prince ordered the killing “based on the people who were involved in the actual act.”

“I think the cover stories from the Saudis are a mess — you don’t bring a bone saw to an accidental fist fight inside a consulate in Turkey,” Sasse said. “The Saudis have said a lot of crap that’s not right, accurate or true — we know that.”

The Republican senators also broke with Trump by pushing for harsh consequences against Saudi Arabia. While Trump vowed there would be a “severe punishment” if the Saudi government was behind Khashoggi’s death, the president has so far rebuffed notions of canceling arms deals with Saudi Arabia and did not call for the crown prince’s removal in his interview with the Post.

Tillis said Sunday the goal of the U.S.’s punishment for Saudi Arabia has to be to “hold the people accountable who committed this horrible act,” including by potentially removing the crown prince from power if he is found to have been involved.

“I don’t believe you can have someone who would authorize this sort of an act be in a position of power with a nation that’s very important to us,” Tillis said. “We have to have limits as to how far we would go to work with them.”

Corker called for a “collective response” from Western countries against the Saudi government if they are found to have been involved, and similarly pushed for the crown prince to not be in power if he directed the killing.

Bin Salman “is a very impressive young person, [but] ... he also has made some mistakes, and obviously if he has gone forth and murdered this journalist, he has crossed the line, and there obviously has to be a punishment and a price to pay for that,” Corker said.

“What we don’t want is a ruler who’s going to be around for 40 or 50 years going around the world continuing to conduct operations like this,” Corker later added. “And so collectively, we’ve got to deal with this in an appropriate way.”