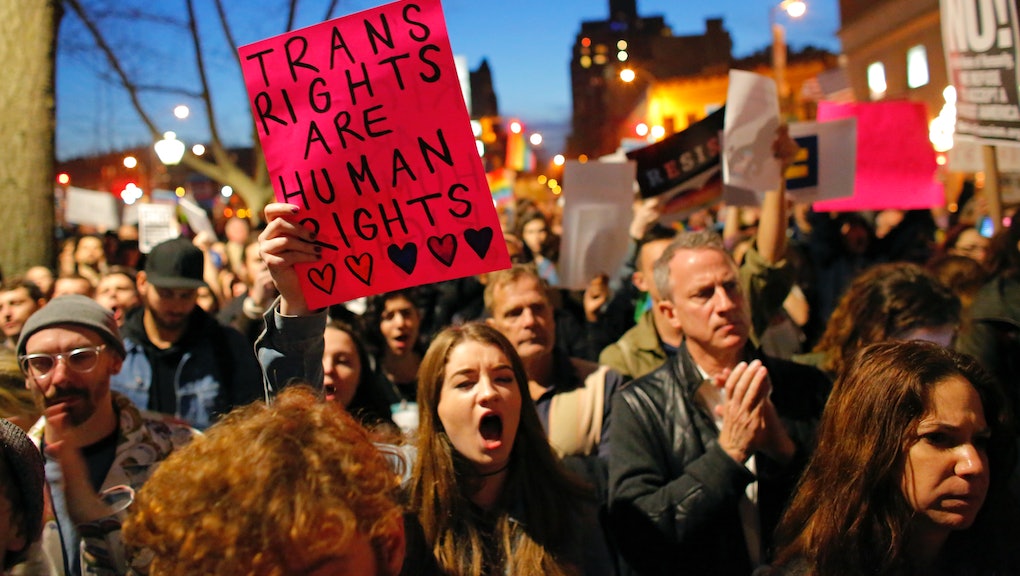 Report: Trump administration to roll back transgender rights by narrowing definition of gender

The Trump administration is reportedly planning to issue a narrow legal definition of gender and sex that will roll back transgender rights, the New York Times reported Sunday.

According to the Times, the administration is considering a legal definition of gender as being determined “on a biological basis that is clear, grounded in science, objective and administrable.” The new guidance would classify sex as “a person’s status as male or female based on immutable biological traits identifiable by or before birth,” and any questions of a person’s sex would be determined through genetic testing.

If adopted, the definition would be classified under the federal civil rights law Title IX, which bars gender discrimination in government-funded education programs. The administration’s effort is being spearheaded by the U.S. Department of Health and Human Services, who sent out a memo urging government agencies that enforce Title IX — the Departments of Education, Labor, Justice and Health and Human Services — to adopt the proposed definition.

Administration officials cited by the Times said the new definition is expected to be presented to the Department of Justice by the end of the year; should the department decide the change is legal, it could then be approved and enforced. The definition could apply to multiple new rules that the White House is expected to release this fall concerning sex discrimination at federally funded schools and health programs.

By narrowing what constitutes gender and sex, the Trump administration would be rolling back the Obama administration’s interpretation of Title IX that determined “discrimination based on sex” included “discrimination based on gender identity.” The currently broad interpretation of the law has been the basis for recent pro-transgender rights rulings, such as those protecting a transgender individual’s right to use the bathroom corresponding with their gender identity.

With its potential new definition, the Trump administration now hopes to curtail these rulings — and the civil rights of thousands of transgender Americans.

Narrowing the government’s view of gender and sex would be the Trump administration’s latest attack on transgender individuals, whom the administration has targeted through such actions as a now-blocked transgender military ban and rescinding Obama-era guidance allowing transgender students to use the bathroom matching their gender identity. The administration has also announced plans to roll back anti-discrimination protections for transgender individuals by health care providers and updated the language for changing gender markers on passports, as well as opened the door to LGBTQ discrimination through guidance emphasizing employers and others’ rights to “religious liberty.”

U.S. Attorney General Jeff Sessions, whose department will approve the new definitions, directed the department in an October 2017 memo to take the position that Title VII’s prohibition on employment discrimination on the basis of sex “encompasses discrimination between men and women but does not encompass discrimination based on gender identity per se, including transgender status.”

“This takes a position that what the medical community understands about their patients — what people understand about themselves — is irrelevant because the government disagrees,” Lhamon said.