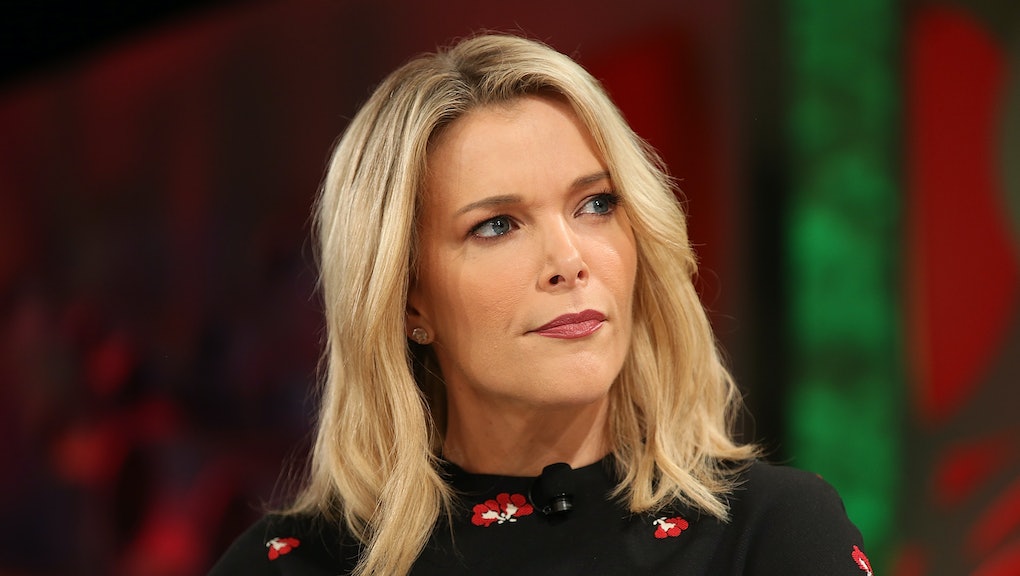 Today show host Megyn Kelly can add blackface defender to her list of controversial and often outright racist stances, which include insisting that Santa Claus and Jesus are white and her previous skepticism about whether race had anything to do with police killings of black people.

On Tuesday morning’s episode of Megyn Kelly Today — during a panel featuring all white people — Kelly defended the idea of white folks dressing in blackface for Halloween, asking “what is racist?” about such an act.

“If you think it’s offensive, it probably is,” panelist Melissa Rivers weighed in, seeming to counter Kelly’s stance, before veering into the topic of manners and polite society.

“But on Halloween?” Kelly asked. “On Halloween you’ve got guys running around with fake axes coming out of their head. It’s gonna be jarring.”

How scary costumes are similar to blackface — a form of makeup used by nonblack theatrical performers before the civil rights movement largely succeeded in redefining it as a form of oppression — remains unclear.

“I think there are limits to how far you want to go,” Jenna Bush Hager added. “Because I think if you’re making people feel bad...”

“Normal people kinda know where that line is,” Rivers interjected.

Still not one of the panelists, which also included MSNBC correspondent Jacob Soboroff, offered any hardlined opposition to Kelly’s position.

Then, in what seemed like a bizarre pivot, Kelly shifted the conversation to The Real Housewives of New York.

During the premiere episode of the show’s recently concluded 10th season, cast member Luann de Lesseps showed up to a Halloween party in blackface, dressed as Diana Ross. She later issued a statement on Twitter denying that she had darkened her skin and stating that she did not mean to offend anyone.

“People said that that was racist,” Kelly remarked of the incident. “And I don’t know, I thought like, ‘Who doesn’t love Diana Ross?’ She wants to look like Diana Ross for one day, and I don’t know how, like, that got racist on Halloween.”

“I haven’t seen it, but it sounds a little racist to me,” Soboroff said in response. “Me too,” Bush Hager agreed. “If she really wanted to look like Diana Ross, she should have dressed like Michael Jackson,” Rivers added, proving comedy to be a gene perhaps not passed down from her mother Joan.

The responses on Twitter suggest Kelly is out of her depth. “Why does this have to be explained to this person?” writer Karen Hunter wrote.

“It is such a problem that Megyn Kelly can make a pro-blackface argument without anyone there to meaningfully pushback,” cultural critic Kimberly Nicole Foster wrote.

“You can take the host out of Fox Mews but you can’t take the Fox News out of the host,” wrote the New York Times national politics reporter Astead Wesley.

“I cannot believe the ignorance on this in 2018,” author and television host Padma Lakshmi wrote. “You are on national television. You have a responsibility to educate yourself on social issues, Megyn Kelly. This is so damaging.”

“What year did she grow up in?” Olympic figure skater Adam Rippon asked.

In a memo Kelly sent to NBC News colleagues on Tuesday afternoon, Kelly issued an apology.

When we had the roundtable discussion earlier today about the controversy of making your face look like a different race as part of a Halloween costume, I suggested that this seemed okay if done as part of this holiday where people have the chance to make themselves look like others. The iconic Diana Ross came up as an example. To me, I thought, why would it be controversial for someone dressing up as Diana Ross to make herself look like this amazing woman as a way of honoring and respecting her?

I realize now that such behavior is indeed wrong, and I am sorry. The history of blackface in our culture is abhorrent; the wounds too deep.

I’ve never been a “pc” kind of person — but I understand that we do need to be more sensitive in this day and age. Particularly on race and ethnicity issues which, far from being healed, have been exacerbated in our politics over the past year. This is a time for more understanding, love, sensitivity and honor, and I want to be part of that. I look forward to continuing that discussion.