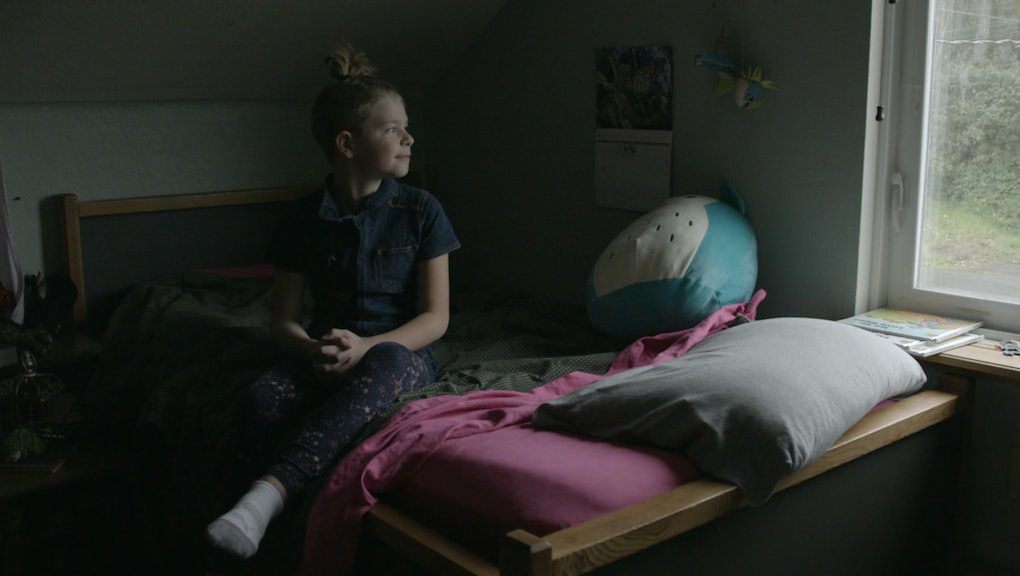 When Pidgeon Pagonis was born, doctors removed their internal testes. Growing up, Pagonis — who identifies are nonbinary and uses they/them pronouns — had no knowledge of their intersex variation.

Up to 1.7% of people are born intersex, according to a Human Rights Watch report, meaning that they are born with reproductive and sexual anatomies that blur the lines of what is considered typically male or female. (That number is nearly the same percent of people who are born with red hair.) The chromosomal makeups, internal and external genitalia, and reproductive organs of intersex individuals deviate from normative expectations of biological sex.

“They didn’t tell me I was intersex, but I knew something was wrong,” Pagonis, who is based in Chicago, said in an interview for Mic Dispatch.

Instead, Pagonis was told that they had cancerous ovaries that needed to be removed for medical reasons. The gonadectomy was not the only surgery that Pagonis endured. At the age of 4, they experienced a clitoral surgery. And at the age of 11, Pagonis was told that they would need a bladder surgery, but instead, doctors performed a full vaginoplasty.

“When I woke up from that surgery, the first thing I did was put my hands between my legs when I was taking a bath and I felt tons of stitches and tons of like rough edges that weren’t there before,” Pagonis, who is now 32, said. “What [doctors] really did was construct vaginal canals and tissue and labia. They did so much surgery, skin grafts and things like that. They did not tell me any of that.”

Pagonis’ experience is startling, but far from isolated. Intersex children are frequently subjected to nonconsensual, medically unnecessary genital surgeries performed with the intent of “normalizing” their genitalia. The consequences of these procedures can be devastating — including loss of sexual function, nerve damage and incontinence. Additionally, surgeons often incorrectly assign genders to intersex children resulting in psychological distress in adolescence and adulthood.

“We don’t have bodily autonomy as intersex kids and as future adults,” Pagonis said. “Doctors and surgeons come in and make decisions about our gender, about our biological sex, and about our hormones and about our bodies from the get go. They’re just like, you don’t deserve that.”

Changing the protocols of intersex medicine

The medical system is experiencing a paradigm shift in intersex health care. Increasingly, medical organizations like the World Health Organization and human rights groups like ACLU are calling on surgeons to stop performing surgeries on intersex children until they are old enough to make their own medical decisions.

“For decades now, medicine has really pathologized what intersex is and what intersex bodies are, and sort of treated it as a disease rather than a difference,” urologist Dr. Ilene Wong said in an interview for Mic Dispatch. “The rarity is actually intersex people who have any trust in the medical system. A lot of intersex patients feel betrayed not only by their physicians, but sometimes by their parents because initially a lot of parents are taught to conceal the diagnosis from their child, and so their diagnosis is filled with this level of shame and stigma, which is incredibly damaging from even from very young age.”

During her residency, Wong, who is a general urologist practicing in West Chester, Pennsylvania, once assisted on a surgery performed on an intersex teen — an experience she now considers the catalyst for her intersex activism.

“She had no uterus, even though she outwardly looked completely phenotypically female, but she had undescended testes,” Wong said. “My attending [surgeon] had performed the informed consent. It was only later after the surgery when I took care of that teenager, I realized how inadequate her consent had been. She did not realize that in removing the gonads, we were actually removing her only source of hormones. She was basically menopausal because of what we had done.”

Historically, doctors and surgeons have sometimes misled intersex patients regarding their diagnoses and withheld key information. According to a 2017 report by Human Rights Watch, it is the recurring patterns of deception and non-disclosure that have contributed to the stigma and shame experienced by intersex individuals.

Pagonis is just one example of an intersex person who only discovered their condition after accessing their own medical records. Their doctors and parents concealed the truth from Pagonis until that point.

“It wasn’t until I got my actual medical records in my hands that I read that I had the gonadectomy, in which is when they took my testes out, my undescended testes, and then I had a cliterectomy and clitoraplasty,” they said. “I found that when I was 11, when I thought I was having a bladder surgery, that they actually did a vaginoplasty on me.”

Pagonis has experienced persistent anxiety and distress as a result of the harm that was inflicted through these procedures and the lack of transparency that followed.

When boundaries are crossed

Wong recounted the unsettling story of another intersex individual who was operated on by another surgeon she knew. When the child was only several months old, she underwent a vaginoplasty that entailed the creation of a vaginal opening that had been been fused due to several hormonal differences in her childhood.

“She had a neo-vagina created that was subject to what’s called stenosis, meaning it closes down,” Wong said. “That means that this child from, the age of one month to 13 years old required daily to weekly vaginal dilations from her parents.” Vaginal dilation involves the insertion of an instrument into a vagina to prevent scarring and the closing of the vaginal opening following a vaginal surgery. According to Human Rights Watch, vaginal dilation performed on a child can be seen as sexual violence.

“You can imagine how traumatic that would be to any child,” Wong said.

In interviews with various intersex individuals, one experience was consistent. They were perpetually violated and subjected to repetitive, unnecessary genital exams by doctors that resulted in intense psychological trauma.

“[The doctor] closes the door and I’m sitting on the exam table, and it has that very familiar crispy paper on top,” Pagonis said. “I was in one of those paper gowns and he sticks his fingers inside of me. He said he needed to see how I looked or felt before I took the hormones. And I’m sitting there, I’m squeezing that crunchy paper, I’m crying, I’m hyperventilating and I’m just being brought back to being a kid when they would pull my pants down and look at me, and I would just always kind of freeze up and go away.”

Pagonis explained that they often felt like they were being treated like a teaching tool and medical anomaly, instead of a sentient human being — a prevalent issue that Wong has identified in intersex medicine.

“I remember very vividly how when my teaching attending [surgeon] introduced me to this patient, they said, ‘this is a great learning case. I’m so excited to teach you this,’” Wong said. “And again, it wasn’t until I treated that patient alone face-to-face and started understanding what her fears were and that she was a person outside of the surgery I had performed.”

When Kristina Turner gave birth to her second child, Ori, she was told Ori had a “disorder of sexual development.” Turner wasn’t exactly sure what that meant, but wanted to make sure that Ori was medically healthy. She and her husband, Josh, spent the weekend researching about intersex children online, and went to their children’s hospital the following week.

“We were definitely advised that surgery was the best option that Ori has testes in their lower abdomen,” Kristina said in an interview for Mic Dispatch. “They wanted to remove those and do the surgeries necessary to solidify a female gender assignment.”

Kristina and Josh both resisted, citing evidence to their doctors about the potential for Ori to experience physical and psychological harm as a result of the procedures.

“I had a stack of research I went in with and I also cited other countries where they were not these practices anymore,” Kristina said. “I was really adamant that I knew my child needed to have their hormones checked and we needed to stay on top of all those things, but that surgery was off the table for us.”

Ori, who is now 11 years old, identifies as nonbinary and uses they/them pronouns. Because Kristina and Josh have been open with Ori about their intersex variation, Ori has embraced their identity and even presented a TedTalk about the importance of letting intersex children make their own decisions about their bodies.

“Since I had gotten to make my own decision, it’s just been really fun,” Ori said in an interview for Mic Dispatch. When asked about other intersex kids who have undergone nonconsensual surgeries, Ori said, “I feel really sad that they’ve had their autonomy taken away and their rights taken away.”

Kristina and Josh have become heavily involved in intersex activism, and are steadfast that they made the correct decision in not allowing Ori to undergo surgery.

“It only took a couple of hours of research for me to be like, this is a human rights violation. This is no different than female genital mutilation,” Kristina said. “It’s just in a hospital under the guise of a doctor. But it’s the same, like you’re taking away the right and autonomy of someone based on some archaic practice that’s really outdated.”

The fight for autonomy continues

On Aug. 28, the California Senate passed a resolution condemning medically unnecessary surgeries on intersex youth — the first state to acknowledge the humanity of the intersex community. The resolution explicitly refers to procedures performed to cosmetically “normalize” intersex kids as a human rights violation.

While this resolution is a historic victory for intersex individuals, several pediatric urologists across the country continue to perform intersex surgeries.

Dr. Laurence Baskin, who is the chief of pediatric urology at University of California San Francisco, was one of the surgeons who testified at the California State Assembly in support of performing surgeries on intersex children.

“These infants are children who have congenital abnormalities like a cleft palate,” he said during the hearings. “We’re restoring normal anatomy... 90% of the time, it’s a girl.” But according to interviews with psychologists and endocrinologists conducted by Human Rights Watch, there is no absolute way to predict the gender identity of a child. This means that surgeons are frequently performing sex assignment surgeries by using their best guess — a practice with the potential for severe, long-term psychological suffering if an individual’s sex is incorrectly assigned.

With numerous doctors continuing to perform genital plastic surgeries and the momentum built from the historic California intersex resolution, intersex activists are continuing to mobilize. Pagonis, who founded the Intersex Justice Project, recently launched a campaign called #EndIntersexSurgery. Through this campaign, Pagonis wants Lurie Children’s Hospital in Chicago to become the first hospital to end intersex surgeries. The campaign has various demands including a public apology from Lurie Children’s Hospital for surgeries performed in the past, a ban on all unnecessary surgical and hormonal interventions on intersex kids, and reparations in the form of free medical services such as hormone therapy if desired.

Check out episode 32 of Mic Dispatch — only on Facebook Watch.