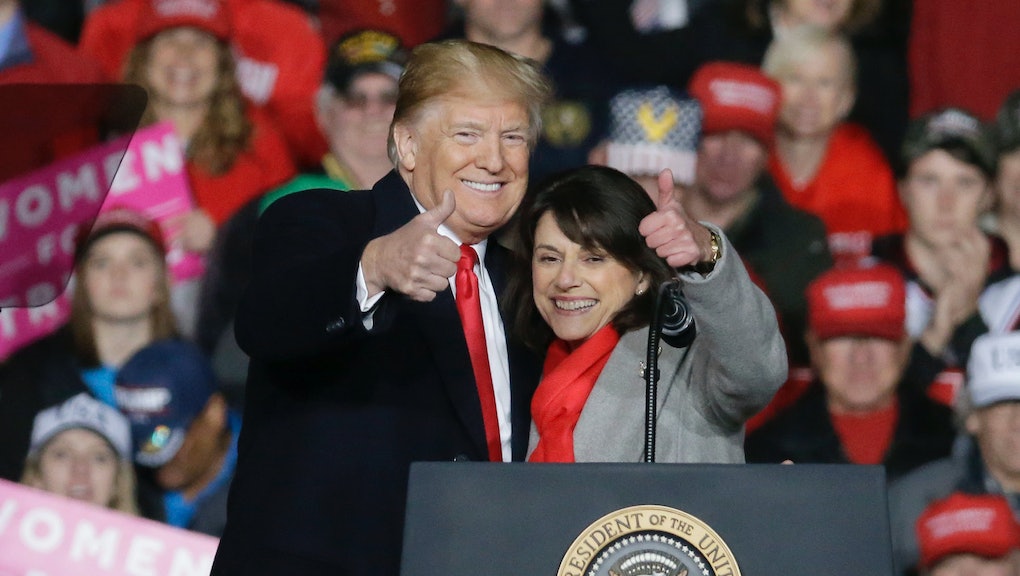 TGIT, readers. Wednesday was a scary day in Trump’s America after bombs were sent to several prominent Democrats as well as to CNN’s New York headquarters by an unknown person or persons.

Another bomb appears to have been sent. This one was addressed to Robert De Niro at his New York City restaurant, and it was found Thursday morning. De Niro feuded with Trump over the summer, similar to the other targets who received bombs.

Thankfully, no one was hurt. But CNN’s president and Democratic leaders blamed Trump’s rhetoric — calling the media the “enemy of the people,” praising the Republican congressman who body-slammed a reporter and saying Democrats are “evil” — for the attempted attacks.

“There is a total and complete lack of understanding at the White House about the seriousness of their continued attacks on the media,” CNN President Jeff Zucker said in a statement. “The president, and especially the White House press secretary, should understand their words matter. Thus far, they have shown no comprehension of that.”

“Time and time again, the president has condoned physical violence and divided Americans with his words and his actions: expressing support for the congressman who body-slammed a reporter, the neo-Nazis who killed a young woman in Charlottesville, his supporters at rallies who get violent with protestors, dictators around the world who murder their own citizens and referring to the free press as the enemy of the people,” Schumer and Pelosi wrote.

The FBI is currently searching for who is behind the bombs.

In the meantime, don’t expect the political rhetoric to change. In fact, Trump has already reverted back to his attacks on the media in a Thursday morning tweet.

“A very big part of the Anger we see today in our society is caused by the purposely false and inaccurate reporting of the Mainstream Media that I refer to as Fake News,” Trump tweeted. “It has gotten so bad and hateful that it is beyond description. Mainstream Media must clean up its act, FAST!”

About last night: Trump can’t hold back from attacking Democrats at Wisconsin rally

Just hours after calling for unity in the wake of a spate of live bombs sent to Democratic officials and CNN, Trump went right back to tossing barbs at Democrats and the media at a campaign rally in Wisconsin.

After calling for Americans to “come together in peace and harmony,” Trump criticized Democrats, who he said “should not mob people in public spaces or destroy public property” — a reference to protesters who have heckled Republican officials at restaurants and the protesters who were against Brett Kavanaugh’s confirmation to the Supreme Court.

Trump, who has called the media the “enemy of the people” and who gets his rally crowds to sneer and jeer at the media whom he calls “fake news,” then told the media to “set a civil tone” and “stop the endless hostility and constant negative and often false attacks and stories.”

The president also didn’t mention the people targeted by the bombs by name nor take responsibility for how his own rhetoric may lead to political violence.

Trump, however, was proud of how he handled himself at the rally, patting himself on the back for what the thought of as restraint.

“By the way, do you see how nice I’m behaving tonight?” Trump asked the crowd.

“Have you ever seen this? We’re all behaving very well!” Trump added, referring to the rally crowd that had earlier chanted “lock her up” about Hillary Clinton, who was the target of one of the mail bombs.

Today in Trump’s America: Get out the vote efforts ramp up as midterms draw near

Progressive organizations are launching an effort to turn out young voters who often don’t make it to the polls ahead of the Nov. 6 midterm elections.

The groups — Planned Parenthood Votes, NextGen America and the Alliance for Youth Action network — are spending six figures to send out voting guides to more than 2 million younger voters in 18 states.

For example, this guide targeted to voters in Florida’s competitive 26th District lays out the platforms of the people running for governor, Senate and House.

The Democratic Congressional Campaign Committee has also invested millions into turning out young and minority voters, running targeted ads on kitchen table issues that could spur those voters who turn out in lower numbers than older Americans to the polls.

Young voters are a key demographic for Democrats. They helped propel former President Barack Obama to victory in both 2008 and 2012, and they could again be an important factor to Democrats winning control of the House.

But her emails...: Republicans made Hillary Clinton’s use of a private email server a major issue in the 2016 elections, saying she put national security at risk. But a new report from the New York Times says Trump uses an unsecured iPhone, and Russian and Chinese spies are listening to his conversations. Trump denied in a tweet that he uses an unsecured iPhone. But the tweet he sent his denial from was sent...yup, from an iPhone.

Republicans use Soros in attack ad after bombing attempt: Republicans didn’t wait long to use scare tactics around Democratic megadonor George Soros after Soros was the target of one of the attempted bombings. The National Republican Congressional Committee used Soros in an ad against a Democratic candidate in Minnesota.