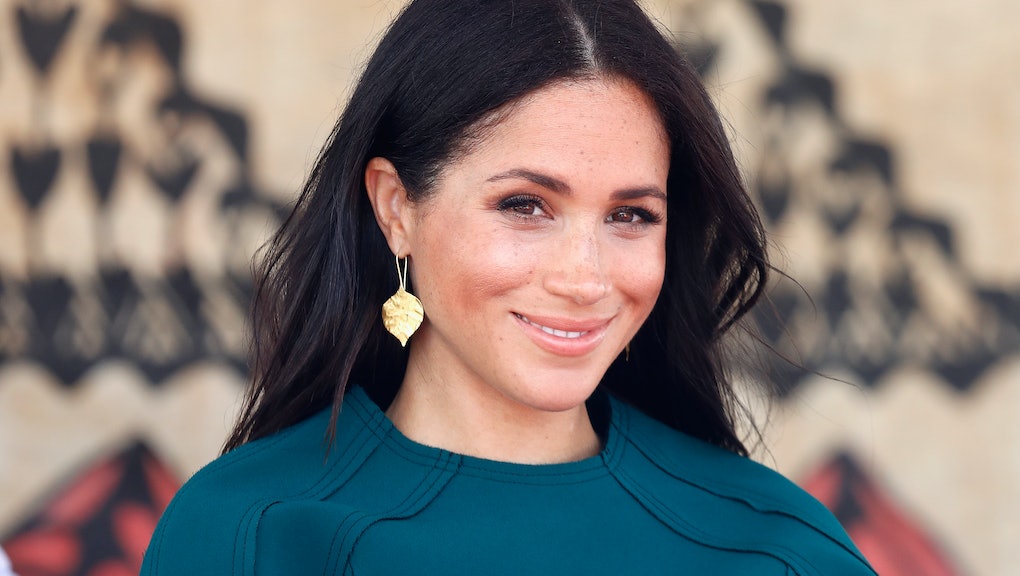 The most outrageous and nonsensical “Meghan Markle wore...” stories to appear on the ‘Daily Mail’

The Daily Mail is known for its outrageously detailed, winding and quite often bizarre headlines. This recent one comes to mind: “Heather Graham, 48, looks slender as she heads to a yoga session... after revealing her friend Valesca Harp died: ‘I’m so sad.’”

Often the publication writes about people not because there is actual news to report, but because readers have an interest in them. Since November 2016, no subject has captivated the attention of the Daily Mail’s readers more than Meghan Markle; there are 1,671 stories on its website when you search her name as of this writing.

There was much to uncover in the early days, as the public knew little about her. But within one month they’d begin to start knowing a lot — a lot — particularly about her clothing, after the Daily Mail ran its first piece attempting to zero in on Markle’s style.

Here’s a brief but very thorough timeline of the tabloid’s most memorable, yet often trivial, style stories about the Duchess of Sussex.

“EXCLUSIVE: Prince Harry’s girlfriend Meghan Markle wraps up warm for a grocery run in Toronto while he finishes off his Caribbean tour,” the tabloid wrote in December 2016. “The actress wrapped up for the outing in a gray oversized sweater, a parka jacket and a blue LA Dodgers baseball hat,” the article read. The piece was accompanied with nine pictures of Markle in the parking lot of a grocery store.

Later that month, the Daily Mail wrote about Markle’s puffer jacket with the headline: “There’s snow stopping her! Prince Harry’s girlfriend Meghan Markle wraps up to take her dog Bogart to the vet in icy Toronto.” Days later, the publication started highlighting singular outfits she wore, often while she was headed nowhere important.

On Dec. 22, 2016, the tabloid ran the story “She’s a real snow-stopper! As Meghan Markle puts her best foot forward in chic winter boots FEMAIL finds 20 of the most practical-yet-stylish pairs to keep your toes toasty this winter.”

A dry January led to this story in February 2017: “Sealed with an ‘H’? Meghan Markle makes a bold declaration of her love for Prince Harry wearing a ring with his initial as she shops for flowers in London.” Again, Markle was described as looking “casually chic,” with 16 photos of her buying flowers.

Later that month, Markle wore a bracelet, so Daily Mail decided to write up 456 words on the subject: “A reminder of Harry? Meghan Markle shows off a new elephant bracelet as she settles back into Toronto life after spending two months with her prince.”

A lace mini-dress inspired this March 2017 story, “Thigh’s the limit! Meghan Markle swaps her signature skinny jeans for a VERY short lace mini-dress as she flashes her legs in a scene from the TV show Suits,” which also gave another shout-out to the aforementioned elephant bracelet.

Wearing a pair of sunglasses was enough for the Daily Mail to run this June 2017 exclusive: “Quick change! Meghan Markle swaps her Blue Jays baseball cap for oversized shades as she touches down in Texas without her boyfriend Prince Harry.” (The sunglasses, it should be noted, were referred to as “chic.”)

Days later, Markle, who “cuts a casual figure,” as the paper described, was given 832 words to help pepper a story about her wearing jeans and a sweater to the airport.

Markle wore leather, so the Daily Mail wrote an article about it with the headline: “Lady in leather! Meghan Markle channels her inner rock chick for her first official engagement with Harry (and the look is worlds apart from demure Kate’s early days with William).” The paper called this look “effortlessly cool.”

A month later, Markle picked up a stranger’s mitten after they dropped it, which was described in 257 words for a story.

Markle wore a coat, and was once again dubbed casually chic for doing so.

An outfit the paper deemed — you guessed it — “chic,” inspired this doozy of a story: “Never has one outfit been designed to send so many messages! From her mismatched earrings to her Sloaney boots, how every item Meghan wore was intended to make a statement.” The statement, it turns out, was the fact that they were mainly British brands, many of which have ethical stances. How her wearing these brands is somehow a statement is a reach Daily Mail felt more than comfortable making.

In a story posted on Valentine’s Day, Markle “set tongues wagging” by wearing four rings on her fingers. Incredible.

A side part and bigger curls seen in March was the “subtle tweak” necessary to deem Markle a “REAL princess,” by the paper.

Later that month, Markle forgot to remove the tailor’s tack from her coat, which did not please the Daily Mail. It wrote: “She’s been wearing her coat wrong! Meghan’s rare fashion faux pas revealed (and why it ruined the shape of her $298 jacket).”

The couple’s May wedding inspired a lot of Markle (and mostly Markle-adjacent) content including more punning: “The rise of the Beauty Mark(le)! Tattoo artist reveals she’s been ‘crazy busy’ with requests for fake FRECKLES since the royal wedding as women rush to copy Meghan’s fresh-faced look.”

This deep-dive article titled, “This is why Meghan Markle wears shoes that are too big,” devoted 476 words to speculating that Markle was in on a little-known celeb secret: Larger sized shoes help avoid blisters.

Though not about her style, my favorite story to date was published in June: “Why Meghan Markle can no longer eat garlic in public as a Royal,” which was quick to note a crucial addendum to the already important story: “Meghan will be allowed to enjoy garlic in her meal when eating privately.” A follow-up story of sorts appeared a month later: “Why Meghan Markle can’t eat carbs at Buckingham Palace.”

By July, Markle was back to “cut[ting] a very casual figure,” as the Daily Mail feels Markle is wont to do. The tabloid gave this story’s headline 39 words to convey this.

Later that month, Markle put her hat on her lap while attending Wimbledon. This nongesture inspired a 571-word story — plus a video.

The paper speculated “Could Meghan Markle’s hair reveal when she is pregnant?” based off her one-time love of Brazilian blowouts. They revisited the topic once more at greater length in September with: “Compelling hair-vidence? Why eagle-eyed royal watchers are convinced that Meghan’s new straighter hairstyle is proof that she is PREGNANT.”

Earlier in October, she “cut a glamorous figure.” And though just days ago, the paper called her “casual chic!” once more, a day before that she was dinged for wearing wedges with the headline: “Meghan Markle wore the Queen’s least favorite thing during Royal Tour in Australia.”

So what have we learned, besides that the Daily Mail has a penchant for calling Meghan Markle casually chic? The answer, according to the Daily Mail, is that Markle too often cuts a casual figure.